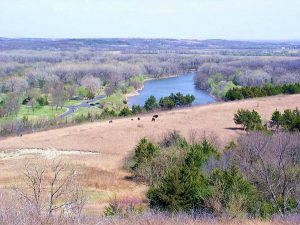 The Big Blue River, the largest tributary of the Kansas River, flows for approximately 250 miles from central Nebraska into Kansas, where it intersects with the Kansas River east of Manhattan.

One of the principal water-courses of northeastern Kansas, it is composed of two branches. The north fork rises in Hamilton County, Nebraska, and the south fork in Adams County, Nebraska. They unite near the town of Crete, from which the main stream follows a southerly course, flowing through the western part of Marshall County, Kansas forming the boundary between the counties of Riley and Pottawatomie, and emptying its waters into the Republican River at Manhattan. It was given its name by the Kanza Indian tribe, who camped at its mouth from 1780 to 1830.

As it makes its way through Nebraska and Kansas, it passes through mostly agricultural land, and shortly before intersecting with the Kansas River, the Big Blue discharges its waters into a reservoir called Tuttle Creek Lake, near Manhattan. The land surrounding the reservoir is a state park area.