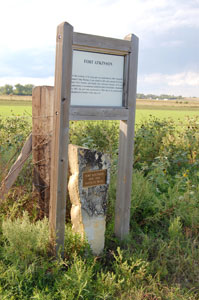 Fort Atkinson was first established the first time in August 1850 by Lieutenant Colonel Edwin Vose Sumner, 1st U. S. Dragoons, on the Middle Crossing of the Arkansas River near present-day Cimarron, Kansas.

The temporary camp, initially called Camp Mackay, was the first regular army post on the Santa Fe Trail in the midst of Indian Country. However, just a month later, Colonel E.V. Sumner determined that the post should be located below the “Crossing” and ordered the post moved to a point on the Arkansas River about two miles west of present-day Dodge City.

Soon soldiers of the Sixth U.S. Infantry were building a “permanent” fort of sod buildings because trees were scarce in the area. The fort continued to be known as Camp Mackay until June 1851 when it was changed to Fort Atkinson. However, the troops more familiarly referred to it as Fort Sumner, Camp #57 or “Fort Sod.”  Later, when the place became infested with field mice that were destroying the buildings and provisions, the soldiers referred to the post as “Fort Sodom.” A post office was established on November 11, 1851

On several occasions, the fort was surrounded by Comanche and Kiowa Indians who endeavored to cut off the post supplies which had to come from Fort Leavenworth, some 370 miles away. Orders were received at Fort Atkinson in mid-May directing that the post be removed to Walnut Creek in Barton County. The troops were finally relieved by Major Robert Chilton with a detachment of the First Dragoons from Fort Leavenworth in June 1853. The soldiers then began to move eastward to the “new” Fort Atkinson. The post office closed on August 22, 1853, but the fort remained occupied until September 22, 1853, when it was abandoned.

The post was briefly reoccupied in June 1854 by the Sixth Infantry but was again abandoned a few months later in October and the buildings were destroyed to prevent their occupancy by the Indians.

Nothing remains of the post today but a small marker located about two miles west of Dodge City, south of Highway 50, on the north side of the Arkansas River.