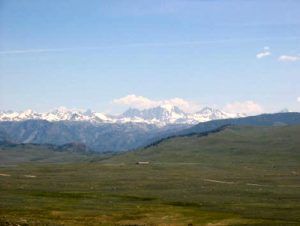 When gold was discovered in the Wind River Valley, numerous mining camps, including South Pass City, Atlantic City, and Miner’s Delight were established in what became known as the Sweetwater Mining District.

A post, first called Camp Augur, then known as Camp Brown, was built in 1869 where Lander is located today. However, it was not enough to protect the settlers against the raiding Indians.

On May 4, 1870, First Lieutenant Charles B. Stambaugh was shot from his horse by a band of warriors as he was helping defend a party of freighters. As a tribute to him, another sub-post was established about eight miles north of the Sweetwater River between Atlantic City and the Oregon-California Trail in June 1870.

Established by Major James S. Brisbin and the 2nd U.S. Cavalry, it was first called Camp Stambaugh. A few months later it became a permanent post and was renamed, Fort Stambaugh. Eight years later, when the mines were beginning to close, people were leaving the area and the Indian hostilities had decreased. The fort was abandoned on August 17, 1878, and was transferred to the Interior Department in May 1881. Today, all that’s left of the fort is a historic marker near South Pass City, Wyoming.