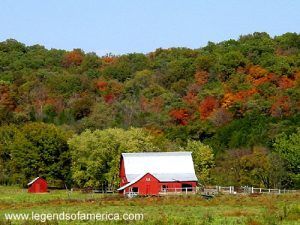 In 1853 a Hebrew peddler, whose pack was light and his purse was full, asked leave to pass the night at the house of Daniel Baker, near Lebanon, Missouri. The favor was granted, and that was the last seen of Samuel Moritz; although, when some neighbors shook their heads and wondered how it was that Baker was so well in funds, there were others who replied that it was impossible to keep track of peddlers, and that if Moritz wanted to start on his travels early in the morning, or to return to St. Louis for goods, it mattered to nobody.

On an evening in 1860 when there was a mist in the gullies and a new moon hung in the west, Reverend Cummings, a clergyman of that region, was driving home, and as he came to a bridge near “old man” Baker’s farm he saw a man standing on it, with a pack on his back and a stick in his hand, who was staring intently at something beneath the bridge.

The clergyman greeted him cheerily and asked him if he would like to ride, whereat the man looked him in the face and pointed to the edge of the bridge. Mr. Cummings glanced down, saw nothing, and when he looked up again the man with the pack had disappeared. His horse at the same moment gave a snort and plunged forward at a run, so that the clergyman’s attention was fully occupied until he had brought the animal under control again; when he glanced back and saw that the man was still standing in the bridge and looking over the edge of it.

The minister told his neighbors of this adventure, and on returning with two of them to the spot next morning they found the body of old man Baker swinging by the neck from a beam of the bridge exactly beneath where the apparition had stood–for it must have been an apparition, inasmuch as the dust, damped though it had been with dew, showed no trace of footprint.

In taking down the body the men loosened the earth on a shelving bank, and the gravel rolling away disclosed a skeleton with some bits of clothing on it that were identified as belongings of Samuel Moritz. Was it conscience, craziness, or fate that led old man Baker to hang himself above the grave of his victim?

Compiled and edited by Kathy Weiser/Legends of America, updated March 2018.

About the Author: Charles M. Skinner (1852-1907) authored the complete nine-volume set of Myths and Legends of Our Own Land in 1896. This tale is excerpted from these excellent works.