Old Governor Hermenegildo Salvatierra, of Presidio, California, sported only one eye — the left — because the other had been shot out by an Indian arrow. With his sound one he was gazing into the fire, on a windy afternoon in the rainy season, when a chunky man in a sou’wester was ushered into his presence, and after announcing that he was no other than Captain Peleg Scudder, of the schooner General Court, from Salem, he was made welcome in a manner quite out of proportion in its warmth to the importance that such a disclosure would have for the every-day citizen. 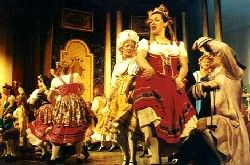 He was hailed with wassail and even with wine. The joy of the commandant was so great that at the third bowl he sang a love ballad, in a voice somewhat cracked, and got on the table to teach the Yankee how to dance the cachuca. The law forbade any extended stay of Americans in Spanish waters, and the General Court took herself off that very night — for this, mind you, was in 1797 when the Spaniard ruled the farther coast.

The next day Salvatierra appeared before his astonished people with a right eye. The priests attached to the fort gave a special service of praise and told the miracle to the red men of their neighborhood as an illustration of the effect of goodness, prayer, and faith. People came from far and near that they might go to church and see this marvel for themselves. But, alas, for the governor’s repute for piety! It soon began to be whispered around that the new eye was an evil one; that it read the deepest thoughts of men with its inflexible, cold stare; that under its influence some of the fathers had been betrayed into confessing things that the commandant had never supposed a clergyman to be guilty of. The people feared that eye and ascribed such rogueries to the old man as had been entirely foreign to his nature hitherto.

This common fear and suspicion reacted, inevitably, and Salvatierra began, unconsciously, to exhibit some of the traits that his subjects said he possessed. He changed slowly from the indulgent parent to the stern and exacting law-giver. He did not know, however, what the people had been saying about him, and never suspected that his eye was likely to get him into trouble.

It was a warm night and he had gone to bed with his windows open — windows that opened from his garden and were level, at the bottom, with the floor. A shadowy form stole along the gravel path and entered one of these windows. It was that of a mission Indian. He had gathered from the talk of the faithful that it would be a service to the deity as well as to men to destroy the power of that evil eye. He came beside the bed and looked attentively at the governor, sleeping there in the light of a candle. Then he howled with fright–howled so loudly that the old man sprang to his feet–for while the left eye had been fast asleep the evil one was broad awake and looking at him with a ghostly glare.

In another second the commandant was at the window whirling his trusty Toledo about his head, lopping ears and noses from the red renegades who had followed in the track of the first. In the scrimmage, he received another jab in the right eye with a fist. When day dawned it was discovered, with joy, that the evil eye was darkened — and forever. The people trusted him once more. Finding that he was no longer an object of dread, his voice became kinder, his manner more gentle.

A heavy and unusual rain, that had been falling, passed off that very day, so that the destruction from flood, which had been prophesied at the missions, was stayed, and the clergy sang “Te Deum” in the church. The old commandant never, to his dying day, had the heart to confess that the evil eye was only a glass one.