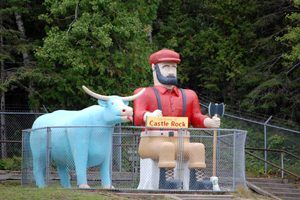 Paul Bunyan is a giant lumberjack in American folklore who has long been the hero of the American logging camps. His exploits, which revolved around the tall tales of his superhuman labors, were told by the fires of bunkhouses in the northern camps from Wisconsin to Maine, from Minnesota to Oregon, to Washington and California for decades.

Customarily accompanied by Babe, the Blue Ox, his character originated in the oral traditions of North American loggers, and at one time, all lumberjacks believed or pretended to believe, that this great man really lived and was the pioneer in the lumber country. Some of the older men even claimed to have known him or members of his crew. His supposed grave is even marked in Kelliher, Minnesota. Perhaps he was a “real” man who worked as a swamper, shacker or lumberjack more skillful and more clever than average, about whose exploits grew.

After his death, his fame probably spread from camp to camp, more tales were added to those told about him, and thus, gradually, he became, in time, an exaggerated type of the lumberjack, and the hero of more exploits than he could possibly have carried out in his lifetime.

Where these tales originated is unknown, but, they were passed down from one generation of lumbermen to another for years dating well back into the early days of lumbering in the northeast. The Lumberjacks, in their slow migration westward, carried the tales freely from camp to camp into all of the lumbering states of the North and into the forests of Canada.

Bunyan stories were usually told in the evening around the fires in the bunk-houses with many of the older narrators speaking in a French-Canadian dialect, and the stories were often full of the technical jargon of the woods. Usually, the stories were told to arouse the wonder of the tenderfoot or simply as contributions in a contest in yarning. They were often of a grotesque and fabulous type, and they were all, more or less, closely related to the exploits of Bunyan and his lumbering crew. “That happened,” said the narrator, “the year I went up for Paul Bunyan. Of course, you have all heard of Paul.” And so the tale began. It was then matched by a bigger yarn, and the series grew.

Often the scene of the exploits narrated was quite fictitious, like the Round River, which was in section thirty-seven, of the Big Onion River, three weeks this side of Quebec. Often, too, the lumberjacks told of events that they said occurred on another lumbering stream than the one they are working on; thus, the men of the Flambeau camps told of the deeds of Paul Bunyan on the Wisconsin River or on the Chippewa River. Sometimes the story-tellers would take Bunyan abroad and would tell of his doings, for example, among the big trees of Oregon, or they would tell of what happened when Paul was a boy on his father’s farm. Usually, however, the tales were supposed to have occurred in the “good” days of lumbering, some forty or fifty years back when the country was new, and in localities not far from the camps in which the yarns were told.

Paul Bunyan was a powerful giant, said to have been seven feet tall and with a stride of seven feet. He was famous throughout the lumbering districts for his physical strength and for the ingenuity with which he met difficult situations. He was so powerful that no man could successfully oppose him, and his ability to get drunk was proverbial. So great was his lung capacity that he called his men to dinner by blowing through a hollow tree a blast so strong that it blew down the timber on a tract of 60 acres, and when he spoke, the limbs sometimes fell from the trees. To keep his pipe filled,  required the entire time of a swamper with a scoop shovel. In the gentle art of writing, Bunyan had, however, no skill. He kept his men’s time by cutting notches in a stick of wood, and he ordered supplies for camp by drawing pictures of what he wanted. On one occasion only did his ingenuity fail; he ordered grindstones and got cheeses. “Oh,” says Paul, “I forgot to put the holes in my grindstones.”

No undertaking was too great for Paul. Lumberjacks said that he was the man who logged the timber off North Dakota. He also scooped out the hole for Lake Superior. This he used for a reservoir as he was needing water to ice his logging roads. The Mississippi River was caused by the overturning of a water tank when his ox slipped. Over the years, his legend grew to include his cousin, Tony Beaver, who cut tall timber in the forests of the South; and his brother, Pecos Bill, who reigned over the cow camps and cattle trails from Texas to beyond the Canada boundary. Kemp Morgan, a waif whom Paul adopted, dug all of the important oil wells in Texas and Oklahoma. 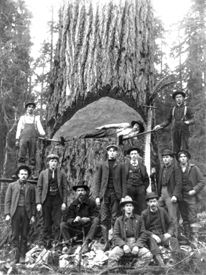 Bunyan was assisted in his lumbering exploits by a wonderful blue ox, a creature that had the strength of nine horses and that weighed, according to some accounts, 5000 pounds, and according to others, twice that. The ox measured from tip to tip of his horns just seven feet, exactly his master’s height. Other accounts declared that the ox was seven feet—or seven ax-handles—between his eyes, and fourteen feet between his horns. Originally he was pure white, but, one winter in the woods it snowed blue snow for seven days and Bunyan’s ox from lying out in the snow all winter became and remained a brilliant blue. Many of the Bunyan legends were connected with the feats performed by the ox. Bunyan’s method of peeling a log was as follows: He would hitch the ox to one end of the log, grasp the bark at the other end with his powerful arms, give a sharp command to the animal, and, presto, out would come the log as clean as a whistle. On one occasion Paul dragged a whole house up a hill with the help of his ox, and then, returning, he dragged the cellar up after the house. Occasionally, as might have been expected from so huge a creature, the ox got into mischief about camp. One night, for example, he broke loose and ate up two hundred feet of tow-line.

One favorite tale connected with the blue ox was that of the buckskin harness. One day old Forty Jones of Bunyan’s crew killed 200 deer by the simple process of tripping a key-log which supported a pile of logs on a hillside above the place where the animals came to drink. The skins were made into a harness for the blue ox. Some days later, while the cook was hauling a log in for firewood, it began to rain, the buckskin began to stretch, and by the time the ox reached camp the log was out of sight around a bend in the road with the tugs stretching back endlessly after it. The cook tied the ox and went to dinner. While he was eating, the sun came out boiling hot, dried the buckskin harness, and hauled the log into camp.

One tale told by a lumberjack stated: When Paul Bunyan was driving a large bunch of logs down the Wisconsin River, the logs suddenly jammed in the Dells. The logs were piled 200 feet high at the head and were backed up for one mile upriver. Paul was at the rear of the jam with the Blue Oxen and while he was coming to the front, the crew was trying to break the jam but they couldn’t budge it. When Paul arrived at the head with the ox he told them to stand back. He then put the ox in the old wise in front of the jam. Then, standing on the bank, shot the ox with a 303 Savage Rifle. The ox thought it was flies and began to switch his tail. The tail commenced to go around in a circle and up stream and, do you know, that ox switching his tail forced that stream to flow backwards and eventually the jam floated back also. He took the ox out of the stream and let the stream and logs go on their way.

Most of the exploits of Paul Bunyan centered at Round River. Here, Bunyan and his crew labored all one winter to clear the pine from a single forty. This was a most peculiar forty in that it was shaped like a pyramid with a heavy timber growth on all sides. The attention of skeptics who refused to believe in the existence of the pyramid forty was certain to be called by the story-teller to a lumberman with a short leg, a member, the listener was solemnly assured, of Bunyan’s crew, who got his short leg from working all winter on one side of the pyramid, and who thus earned the nickname of “Rockin’ Horse.” From this single forty, Bunyan’s crew cleared one hundred million feet of pine, and in the spring they started it down the river. Then began the difficulty, for it was not until they had passed their old camp several times that they realized that the river was round and had no outlet whatever. According to another version this logging occurred on a lake with no outlet.