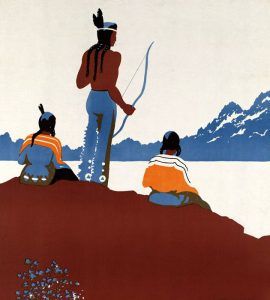 Indians at the top of a Mountain.

A hundred years before the white men set up their trading posts on the Arkansas and Platte Rivers, a band of Ute warriors made a descent on what they took to be a small company of plainsmen, but who proved to be the enemy in force, and who, in turn, drove the Ute Indians into the hills. Most of them took refuge on a castellated rock on the south side of Boulder Canyon, where they held their own for several days, rolling down huge rocks whenever an attempt was made to storm the height. Their enemies, seeing that the mountain was too secure a stronghold to be taken by force, camped at the bottom and, by cutting off the access of the beleaguered party to game and water, starved every one of them to death.

This, too, is the story of Starved Rock, on the Illinois River, near Ottawa, Illinois. It is a sandstone bluff, 150 feet high, with a slope on one side only. Its summit is an acre in extent, and at the order of French explorer, Sieur de La Salle, his Indian lieutenant, Tonti, fortified the place and mounted a small cannon on it. 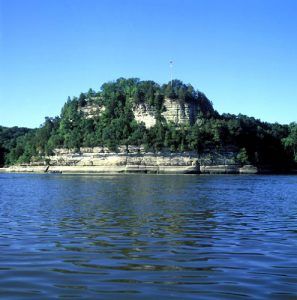 He died there afterward. After the killing of Chief Pontiac at Cahokia, some of his people, the Ottawa, charged the crime against their enemies, the Illinois. Being few in number, the latter entrenched themselves on Starved Rock, where they kept their enemies at bay but were unable to break their line to reach vessels into the river at the end of thongs, but the Ottawa came under the bluff in canoes and cut the cords. Unwilling to surrender, the Illinois remained there until all had died of starvation. Bones and relics were later found occasionally at the top.

There is yet another place of which a similar narrative is extant — namely, Crow Butte, Nebraska, which is 200 feet high and vertical on all sides save one, but on that, a horseman may ascend in safety.

A company of Crow, fleeing from the Sioux, gained this citadel and defended the path so vigorously that their pursuers gave up attempts to follow them but squatted calmly on the plain and proceeded to starve them out. On a dark night, the besieged killed some of their ponies and made lariats of their hides, by which they reached the ground on the unguarded side of the rock. They slid down, one at a time, and made off all but one aged Indian, who stayed to keep the campfire burning as a blind. He went down and surrendered the next day, but the Sioux, respecting his age and loyalty, gave him freedom.

By Charles Skinner, 1896. Compiled and edited by Kathy Weiser/Legends of America, updated July 2021. 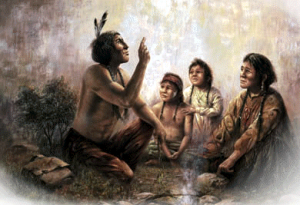 About the Author: Charles Montgomery Skinner (1852-1907), an American writer, is best known for his collections of myths, legends, and folklore found in the United States and across the world. His writings were wide-ranging, including his popular folklore tales and guides to gardening, urban beautification, and natural history. This tale is from his nine-volume set of Myths and Legends of Our Own Land, published in 1896. However, as it appears here, the story is not verbatim, as it has been edited for clarification, additional information, and ease of the modern reader. However, the context remains essentially the same.