“You cradle the 45.5-carat stone—about the size of a walnut and heavier than its translucence makes it appear—turning it from side to side as the light flashes from its facets, knowing it’s the hardest natural material yet fearful of dropping it.”

The Hope Diamond, one of the most famous jewels in the world, has a history dating back almost four centuries. The beautiful 45.52 blue diamond is also said to be cursed, bringing misfortune and tragedy to its many owners over the years. 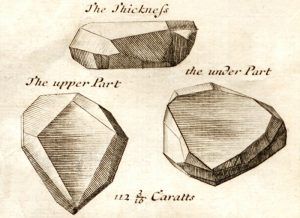 The jewel is believed to have originated in India, probably from the Kollur Mine in Golconda sometime during the early 1600s. Beginning in 1630, French gem merchant, Jean-Baptiste Tavernier, began making a series of six voyages from France to Persia and India to trade in precious stones and other high-end wares. At some point, between the years 1640 and 1667, he obtained a 115 carat (nearly size of man’s fist) precious stone that was somewhat triangular in shape, crudely cut, and described by Tavernier as a “beautiful violet.” Though the merchant documented his travels and the gems that he collected over the years, he did not state from whom or when he obtained the large blue diamond, that became known as the “Tavernier Blue.”

Early legend says that Tavernier stole the diamond from a Hindu temple, where it was set as one of two matching eyes of an idol and afterward, the temple priests laid a curse on whoever might possess the missing stone. 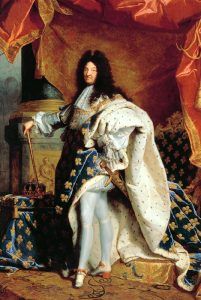 Tavernier returned to Paris on his final voyage in 1668 and the same year, sold the large blue diamond to French King Louis XIV, along with 14 other large diamonds and several smaller ones. His final voyages secured for him a large fortune and great reputation at home. In 1669, he received patents of nobility and the next year, purchased a large estate near Geneva, Switzerland, and spent his next years writing and publishing accounts of his journeys. In the end, if the diamond was cursed, it did not seem to affect Tavernier, who lived a comfortable life until his death at the age of 84.

In the meantime, King Louis XIV commissioned the court jeweler Jean Pitau to recut the Tavernier Blue to “make him a piece to remember” in 1673. The large blue diamond was then cut almost in half, resulting in a 69 carat stone. In the royal inventories, its color was described as an intense steely-blue and the stone became known as the “Blue Diamond of the Crown,” or the “French Blue.” Pitau spent two years on the piece, resulting in a “triangular-shaped 69-carat gem the size of a pigeon’s egg that took the breath away as it snared the light, reflecting it back in bluish-grey rays.” When complete, the diamond was set in a gold cravat pin that received additional support from a ribbon worn around the neck, which the king wore on ceremonial occasions.

“At the diamond’s dazzling heart was a sun with seven facets – the sun being Louis’ emblem, and seven being a number rich in meaning in biblical cosmology, indicating divinity and spirituality.” 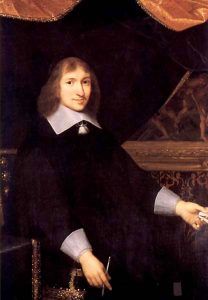 As to whether he was affected by the curse, King Louis XIV suffered when all of his legitimate children, but one, died in childhood. Though he tried to project an image of a healthy and virile king, he suffered a number of ailments in his life including symptoms of diabetes, recurring boils, fainting spells, gout, dizziness, hot flushes, headaches, and underwent a painful operation. However, his reign of 72 years and 110 days is the longest recorded of any monarch of a sovereign country in European history. During Louis’ long reign, France was the leading European power, fought three major wars, and two lesser conflicts. He died of gangrene, four days before his 77th birthday. Upon his death in 1715, his title and estate, including the Blue Diamond was inherited by his five-year-old great-grandson King Louis XV.

During King Louis XIV reign, another man who is said to have been affected by the curse was Nicholas Fouquet, who was the superintendent of the country’s finances. For a special occasion, Fouquet was allowed to wear the precious stone. A short time later, he and the king argued and Fouquet was soon charged with maladministration of the state’s funds. Fouquet was then imprisoned at the Fortress of Pignerol in 1664, where he stayed until his death in 1680. 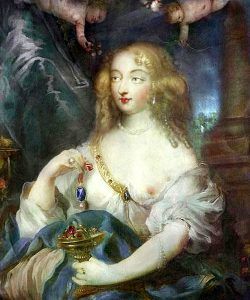 Another person said to have been cursed by the diamond during King Louis XIV reign was his chief mistress, Madame de Montespan, with whom he had seven children. His mistress, whose name was Francoise-Athenaïs de Rochechouart, was from one of the oldest noble families of France and grew up to marry French Nobleman Louis Henri de Pardaillan de Gondrin, the Marquis of Montespan. The couple lived in a small house close to the Louvre, which allowed Madame de Montespan to attend court often, where she quickly established herself as the “reigning beauty of the court”. She was also cultured, an amusing conversationalist, intelligent, and kept abreast of political events. The Marquise de Montespan first danced with King Louis XIV at a ball at the Louvre Palace and soon developed a romantic relationship with him. By 1667, she was called by some the “true Queen of France” due to her pervasiveness and influence at court. She was also known for openly disrespecting Queen Maria Theresa in public. But the King did not admonish her and was so enamored of her that she was painted holding the Blue Diamond of the Crown. She also reputedly wore the diamond several times in public.

Due to the open royal adultery, the Roman Catholic Church soon became her adversary and in 1675, a priest refused to give her absolution, which was necessary for her to take Easter communion, a requisite for all Catholics.

“Is this the Madame that scandalizes all France? Go abandon your shocking life and then come throw yourself at the feet of the ministers of Jesus Christ.”

Though the King appealed to the priest’s superiors, the Church refused to yield to the king’s demands. Afterward, the pair stopped seeing each other for a brief period, before they resumed their relationship. However, it wouldn’t last. In 1679, Montespan was accused of using witchcraft and aphrodisiacs to stay ahead of King Louis’s other lovers. One of her accusers even alleged that Montespan performed black masses, a sacrilegious accusation that effectively destroyed Montespan’s reputation. Fearful of his own reputation, the King stopped seeing her publically, but discreetly continued to visit her until 1691, when retired her to the Filles de Saint-Joseph Convent. When she died in May 1707, at the age of 66, the king forbade her children to wear mourning for her 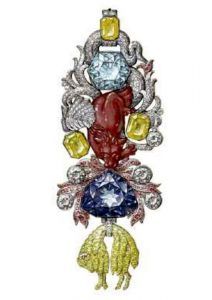 In 1715, King Louis XV took the throne at the age of five, but the kingdom was ruled by Philippe II, the Duke of Orleans until the king reached the age of 13. He married when he was just 15 and the couple had ten children, but only seven would live to adulthood. He also had as many as a dozen illegitimate children. During his early years, King Louis XV was well regarded and earned the nickname “Louis the Well-Beloved.”  In 1749, the king had the Blue Diamond reset by court jeweler Andre Jacquemin in a piece of ceremonial jewelry for the Royal Order of the Golden Fleece.

Unfortunately, his political actions and stubborn personality in the next years would earn him the contempt of his subjects. His lack of strength during the Seven Years’ War that lasted from 1756 and 1763, resulted in France losing nearly all of its colonial possessions in North America and India. During this time he was also accused of damaging France’s foreign relations and continuously overspending. Though King Louis XV had the second-longest reign in the history of France, exceeded only by his predecessor and great-grandfather, Louis XIV, historians generally give his reign very low marks, because wars drained the treasury and his actions contributed to the decline of royal authority that led to the French Revolution in 1789. Louis XV died a hated man in May 1774, and the throne was succeeded by his grandson, Louis XVI.

Louis XVI was just 20 years old when he assumed the throne and was still immature, lacking in self-confidence, and austere in manner. With these traits, he assumed the responsibilities of running a nation that was heavily in debt. His approval of French military and financial support of the colonists in the American Revolution led to foreign policy success, but the borrowing required to pay for the war drove the government to the brink of bankruptcy. This led the king to support radical fiscal, economic, and administrative reforms during the age of Enlightenment, which encouraged individual liberty, religious tolerance, and was in opposition to an absolute monarchy and the fixed dogmas of the Roman Catholic Church. The King’s support of radical fiscal reforms were not favorable with the nobles or the people. Making matters worse, the French people loathed the King’s wife, Marie Antoinette, who was accused of being promiscuous, sympathetic to French enemies, frivolous, and extravagant, which discredited the monarchy.