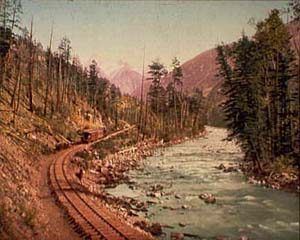 In the days when Spain ruled the Western country, an infantry regiment was ordered out from Santa Fe, New Mexico, to open communication with Florida and to carry a chest of gold for the payment of the soldiers in St. Augustine. The men wintered on the site of Trinidad, Colorado, comforted by the society of their wives and families. In the spring, the women and camp-followers were directed to remain while the troops set forward along the canyon of the Purgatoire River — neither to reach their destination nor to return. Did they attempt to descend the stream in boats and go to wreck among the rapids? Were they swept into eternity by a freshet? Did they lose their provisions and starve in the desert? Did the Indians revenge themselves for brutality and selfishness by slaying them at night or from an ambush? Were they killed by bandits? Did they sink in the quicksands that led the river into subterranean canals?

No one will ever know, perhaps, but many years afterward, an Indian told a priest in Santa Fe that the regiment had been surrounded by Indians, as George Custer’s command was in Montana, and slain, to a man. Seeing that escape was hopeless, the colonel — so said the narrator — had buried the gold that he was transporting. Thousands of doubloons are believed to be hidden in the canyon, and thousands of dollars have been spent searching for them.

After weeks had lapsed into months and months into years, and no word came of the missing regiment, the priests named the river El Rio de las Animas Perdidas — the River of Lost Souls. The echoing of the flood as it tumbled through the canyon was said to be the troopers’ lamentation. French trappers softened the suggestion of the Spanish title when they renamed it Purgatoire, and — “bullwhackers” teaming across the plains twisted the French title into the unmeaning “Picketwire.” But, Americo-Spaniards keep alive the tradition, and the prayers of many have ascended. They do ascend for the succor of those who vanished so strangely in the valley of Las Animas.

About the Author:  Charles M. Skinner (1852-1907) authored the complete nine-volume set of Myths and Legends of Our Own Land in 1896.  This tale is excerpted from these excellent works; however, it is not verbatim, as it has been edited.