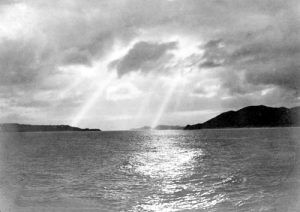 On the northerly shore of San Francisco Bay, California, at a point where the Golden Gate broadens into the Pacific, stands a prominent bluff that affords shelter from the prevailing winds to a semicircular bay on the east. Around this bay, the hillside is bleak and barren, but there are traces of former habitation in a weather-beaten cabin and deserted corral. It is said that these were originally built by an enterprising squatter, who for some unaccountable reason abandoned them shortly after. The “jumper” who succeeded him disappeared one day quite just as mysteriously. The third tenant, who seemed to be a man of sanguine, hopeful temperament, divided the property into building lots, staked off the hillside, and projected the map of a new metropolis.

Failing, however, to convince the citizens of San Francisco that they had mistaken the site of their city, he presently fell into dissipation and despondency. He was frequently observed haunting the narrow strip of beach at low tide or perched upon the cliff at high water.

In the latter position, a sheep-tender one day found him, cold and pulseless, with a map of his property in his hand, and his face turned toward the distant sea. 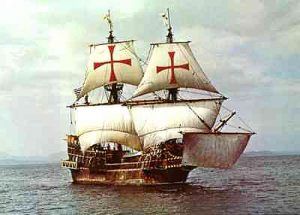 Perhaps these circumstances gave the locality its infelicitous reputation. Vague rumors were bruited of a supernatural influence that had been exercised on the tenants. Strange stories were circulated of the origin of the diabolical title by which the promontory was known. By some, it was believed to be haunted by the spirit of one of Sir Francis Drake’s sailors, who had deserted his ship in consequence of stories told by the Indians of gold discoveries, but who had perished by starvation on the rocks. A vaquero who had once passed a night in the ruined cabin related how a strangely dressed and emaciated figure had knocked at the door at midnight and demanded food. Other story-tellers, of more historical accuracy, roundly asserted that Sir Francis himself had been little better than a pirate, and had chosen this spot to conceal quantities of ill-gotten booty taken from neutral bottoms, and had protected his hiding-place by the orthodox means of hellish incantation and diabolic agencies. On moonlight nights a shadowy ship was sometimes seen standing off and on, or when fogs encompassed sea and shore, the noise of oars rising and falling in their rowlocks could be heard muffled and indistinctly during the night.

Whatever foundation there might have been for these stories, it was certain that a more weird and desolate-looking spot could not have been selected for their theatre. High barren hills, filled with dark canyons, cast their gaunt shadows on the tide. During a greater portion of the day the wind, which blew furiously and incessantly, seemed possessed with a spirit of fierce disquiet and unrest. Toward nightfall the sea-fog crept with a soft step through the portals of the Golden Gate, or stole in noiseless marches down the hillside, tenderly soothing the wind-buffeted face of the cliff, until sea and sky were hidden together. At such times the populous city beyond and the nearer settlement seemed removed to an infinite distance. An immeasurable loneliness settled upon the cliff. The creaking of a windlass, or the monotonous chant of sailors on some unseen, outlying ship, came faint and far, and full of mystic suggestion.

About a year ago a well-to-do middle-aged broker of San Francisco found himself at nightfall the sole occupant of a plunger, encompassed in a dense fog, and drifting toward the Golden Gate. This unexpected termination of an afternoon’s sail was partly attributable to his want of nautical skill, and partly to the effect of his usually sanguine nature. Having given up the guidance of his boat to the wind and tide, he had trusted too implicitly for that reaction which his business experience assured him was certain to occur in all affairs, aquatic as well as terrestrial. “The tide will turn soon,” said the broker confidently, “or something will happen.”

He had scarcely settled himself back again in the stern-sheets, before the bow of the plunger, obeying some mysterious impulse, veered slowly around and a dark object loomed up before him. A gentle eddy carried the boat farther inshore until at last it was completely embayed under the lee of a rocky point now faintly discernible through the fog. He looked around him in the vain hope of recognizing some familiar headland. The tops of the high hills which rose on either side were hidden in the fog. As the boat swung around, he succeeded in fastening a line to the rocks and sat down again with a feeling of renewed confidence and security.

It was very cold. The insidious fog penetrated his tightly buttoned coat and set his teeth to chattering in spite of the aid he sometimes drew from a pocket-flask. His clothes were wet, and the stern-sheets were covered with spray. The comforts of fire and shelter continually rose before his fancy as he gazed wistfully on the rocks. In sheer despair, he finally drew the boat toward the most accessible part of the cliff and essayed to ascend. This was less difficult than it appeared, and in a few moments, he had gained the hill above. A dark object at a little distance attracted his attention, and on approaching it proved to be a deserted cabin.

The story goes on to say that, having built a roaring fire of stakes pulled from the adjoining corral, with the aid of a flask of excellent brandy, he managed to pass the early part of the evening with comparative comfort.  There was no door in the cabin, and the windows were simply square openings, which freely admitted the searching fog. But in spite of these discomforts,–being a man of cheerful, sanguine temperament,–he amused himself by poking the fire and watching the ruddy glow which the flames threw on the fog from the open door. In this innocent occupation, a great weariness overcame him, and he fell asleep.

He was awakened at midnight by a loud “halloo,” which seemed to proceed directly from the sea. Thinking it might be the cry of some boatman lost in the fog, he walked to the edge of the cliff, but the thick veil that covered sea and land rendered all objects at the distance of a few feet indistinguishable. He heard, however, the regular strokes of oars rising and falling on the water. The halloo was repeated. He was clearing his throat to reply when to his surprise an answer came apparently from the very cabin he had quitted. Hastily retracing his steps, he was the more amazed, on reaching the open door, to find a stranger warming himself by the fire. Stepping back far enough to conceal his own person, he took a good look at the intruder.

He was a man of about forty, with a cadaverous face. But the oddity of his dress attracted the broker’s attention more than his lugubrious physiognomy. His legs were hidden in enormously wide trousers descending to his knee, where they met long boots of sealskin. A pea-jacket with exaggerated cuffs, almost as large as the breeches, covered his chest, and around his waist, a monstrous belt, with a buckle like a dentist’s sign, supported two trumpet-mouthed pistols and a curved hanger. He wore a long braid, which went halfway down his back. As the firelight fell on his ingenuous countenance the broker observed with some concern that this queue was formed entirely of a kind of tobacco known as pigtail or twist. Its effect, the broker remarked, was much heightened when in a moment of thoughtful abstraction the apparition bit off a portion of it and rolled it as a quid into the cavernous recesses of his jaws.