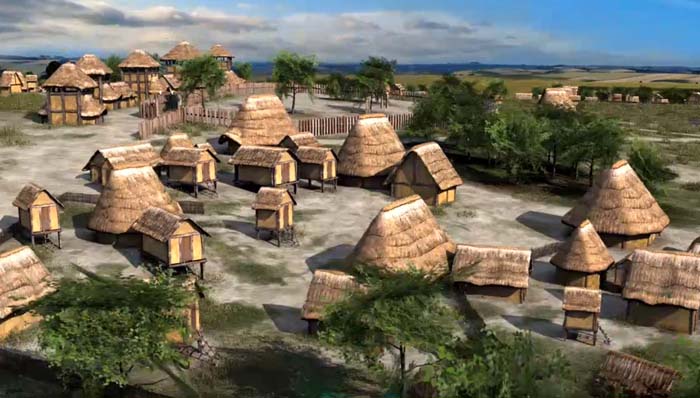 Native Village with a Corral

Living near the Chicora people in South Carolina and Georgia, was the Duhare tribe who were predecessors of the Creek Indian tribe. They were different from the other area natives – very different.

They were Caucasian, had red or brown hair that hung to their heels, freckles, gray eyes, and they were noticeably taller than other natives in the area. Most of the men wore mustaches and the high leaders wore beards.

They herded domesticated deer using herd dogs in the way that Europeans did cattle. They also milked the deer and made cheese from the milk. The excess male deer population was fattened with corn for butchering. Corrals were built for the deer, where they stayed at night, but were allowed to roam during the day, accompanied by herders. 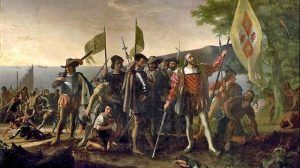 They raised chickens, ducks, geese, and other fowl and were skilled farmers, growing large quantities of Indian corn, grain, potatoes, and other vegetables that had been developed in the New World. They owned some metal tools.

They were governed by a chief named Datha, who was of a gigantic size, whose wife was as large as he was. In place of horses, the king was carried on the shoulders of strong young men. The chief was decorated with brightly colored paint or tattoos. The chief and his wife lived in a stone palace.

In other aspects, such as their houses and pottery, they were similar to those of American Indians.

They were first encountered in 1521 by Captain Francisco Gordillo, a Spanish explorer, and Pedro de Quejo, a Spanish “slaver.” Gordillo had been sent northward from Hispaniola in the Caribbean by Lucas Vasquez de Allyon to explore the American mainland. Along the way, Captain Gordillo met up with Pedro de Quejo, and the two of them are the first known Spaniards to sail along the Georgia, South Carolina, North Carolina, and Virginia coasts.

When the two ships arrived in present-day South Carolina, the Spanish were friendly with the Duhare people but captured 70-80 natives of the Chicora as slaves.

Upon their return to the Caribbean, they told of the Duhare people that they had met, which was recorded by Peter Martyr d’Anghiera, an Italian historian in the service of Spain to chronicle the explorer’s activities. He clarified that the Duhare stood at least a foot taller than the Spanish and were an advanced society compared to other natives. More documentation states that when Spanish explorer Lucas Vazquez de Ayllon landed in modern-day South Carolina in 1526, he found the Duhare in possession of some form of pyrotechnic devices including sparklers and rockets. He also observed that the people divided their year into twelve moons.

Some researchers believe that these people may have been of Irish origin, citing several examples, in addition to their appearance.

While dairy deer seems impossible, it is known that several Gaelic tribes in Ireland and Scotland had domesticated dairy deer before dairy cows. Deer milk has been celebrated in Gaelic poetry. 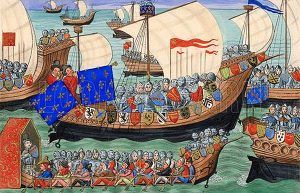 The Vikings, who are now known to have explored North America long before Christopher Columbus, described the Irish as able seamen who traveled extensively and great distances, as far as Iceland in the 10th century. The Vikings also claimed that the Irish occupied an area south of the Chesapeake Bay called Hvitramamaland, meaning “Land of the White Men.

The New Advent Catholic Encyclopedia and other sources speak of the Irish being the first white men to come to the Americas hundreds of years before Columbus. It also states that the Shawano Indians recognized a white tribe in Florida, who were said to have had iron implements.

The Duhare were said to have had metal tools, even though the nearest deposits of iron and copper ores were 280 miles away from the coast. While this doesn’t necessarily point to the Irish, it does indicate European influence.

However, other researchers and historians adamantly disagree. 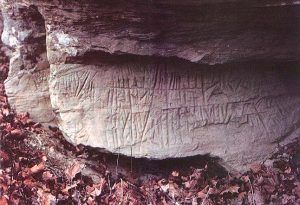 In 1983, when Dr. Barry Fell, a professor emeritus at Harvard University, said he found writing on rocks in West Virginia, which he described as “Christian messages in old Irish script,” he was attacked and discredited. These petroglyphs were thought to be carved in Ogam, an Irish script used from the 6th to 8th centuries. Fell claimed that Brendan of Clonfert, one of the “Twelve Apostles of Ireland”, who made an epic journey between 512–530, may have reached North America centuries before Columbus. This was based on his translation of two rock-cut inscriptions located at archaeological sites in Wyoming and Boone Counties in West Virginia, which he said narrate the story of Christ’s nativity and date back to between the 6th and 8th centuries. 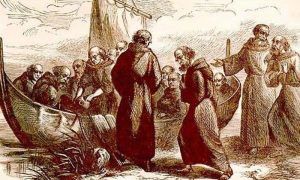 Years earlier, in 1922 Smithsonian Institution publication, it referenced Spanish historian’s Martyr’s passages on Duhare but was prefaced with contemptuous remarks that the story couldn’t be true and that the Duhare were probably a Siouan tribe.

The Spanish descriptions of the Duhare culture seemed so absurd to scholars, not familiar with Irish history, that it was ignored during the following five centuries.

However, in 2006, People of One Fire, a nationwide team of Native American scholars, primarily of Creek Indian heritage, began a comprehensive research program to obtain more accurate and detailed knowledge of North America’s pre-European history. 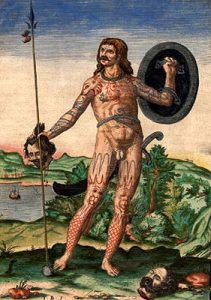 As part of their research, they attempted to translate every single Native American word that was included in the transcripts of colonial powers, particularly those of Spain. While many of those words were easily translated by modern Creek, Alabama, Koasati, or Choctaw dictionaries. Interestingly, there were no Cherokee words, whatsoever. The words associated with the province of Duhare defied translation until 2011.

A check with Gaelic dictionaries quickly found translations for many of the Duhare words. The researchers then began to investigate the similarity of Irish rock carvings to those in South Carolina, when one team member came across an ancient Irish lullaby entitled “Bainne nam fiadh” which translates to “On milk of deer I was reared. On milk of deer, I was nurtured. On milk of deer beneath the ridge of storms on crest of hill and mountain.”

The Duhare people were not the only red-haired giants in America, as other tribes have been “seen” them across the continent. The Mandan tribe of North and South Dakota told early French explorers that there were natives in the region that had fair skin with red or blonde hair and blue or grey eyes.

The Paiute of Nevada have long spoken of red-haired giants known as the Si-Te-Cah. Legends from Midwest tribes tell of lightly pigmented, yellow-or-red-haired giants living around the Great Lakes or southern Canada. 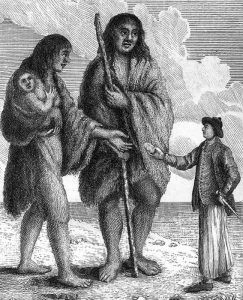