Doniphan, Kansas is a ghost town located in southeast Doniphan County along the Missouri River. This muddy river would be the reason for the establishment of Doniphan, its growth, and finally, its end.

Long before white settlers came to the area, Kanza Indians lived here. In 1724, the region was explored by Frenchman Etienne Veniard De Bourgmont who found the Indians living in sod-covered dwellings along the creeks and rivers. In the late 1700s, the Kanza Indians relocated for unknown reasons. 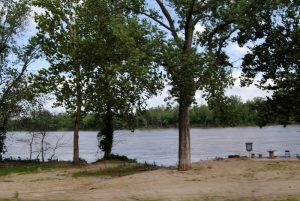 The Missouri River near Doniphan, Kansas by Kathy Weiser-Alexander.

In 1852, Josephus Utt, an agent for the Kickapoo Indians, erected a trading post near the riverbank below what would soon become the townsite of Doniphan. This area had long been known by boatmen up and down the river as an excellent landing point. The steamboat traffic, excellent rock-bound landing, and the abundant woods in the area prompted the organization of a town company. On November 11, 1854, organizers of the Doniphan Town Company met at St. Joseph, Missouri to elect officers and in the spring of the next year, a townsite situated on the river bluffs above the river was surveyed by James F. Forman. Forman was paid for his services in his choice of town lots and constructed the first building, which soon housed the Forman Brothers Store. When a post office was established in the store on March 3, 1855, Forman became the first postmaster. Both the town and the county were named for General Alexander William Doniphan, who had distinguished himself in the Mexican-American War. 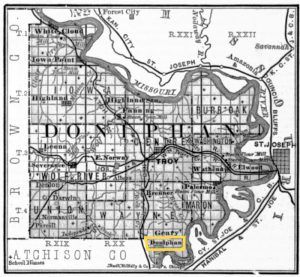 Sale of town lots began on April 15, 1855, with some going for a much as $2,000. Within no time, there were other incoming businesses and settlers building homes. That year, the fledgling city welcomed a lawyer named Colonel D. M. Johnson, Allen B. Lyon who ran a dry goods store, I.N. Smallwood, a wagonmaker that was said to have been kept very busy; a tinsmith named Patrick Laughlin who made tin pans and coffee pots; William Beauchamp, a blacksmith, and Samuel Collins who set up the first sawmill. Bowdell & Drury operated the first drug store,  George A. Cutler was the first physician, and the first hotel was built by Forman Brothers and called the Doniphan House. It was opened and run by Barney O’Driscoll. Two large warehouses were built along the wharf that could accommodate 15 boats a day. The first election was held in October 1855. The first religious services in Doniphan were held by Father Alderson, a Baptist minister, who preached at different times in 1855.

Though the town immediately flourished, these were troubled times in Kansas, especially in towns and counties situated along the eastern border. Kansas had only recently been opened up for settlement and various factions rushed to Kansas in support of their cause — Slave State or Free State. In 1855, a fraternal organization called the Danites was founded by Mormon members. Tinsmith Patrick Laughlin joined the society, which believed in the Free-State cause. However, he soon became disillusioned and openly proclaimed all of the society’s secrets. For this, the Danites vowed vengeance, and Samuel Collins, the sawmill owner swore vengeance on Laughlin.

On November 29th, when Laughlin was crossing the street he was met by Collins who at once attempted to shoot him but his weapon misfired. Collins then drew a knife and stabbed Laughlin so severely that it brought him to his knees but before he could proceed further a friend of Laughlin’s, named Lynch, stepped from the sidewalk and fired on Collins. Although mortally wounded, Collins clubbed his gun and struck his assailant a terrible blow on the head felling him to the ground. Collins was then picked up by his friends and died a short time later. Laughlin and Lynch, although both badly hurt, recovered. This was the end of the Danites in Doniphan.

In 1856, Thomas J. Key established the first newspaper called the Constitutionalist which served as a mouthpiece for the promotion of slavery. The first school was taught by Mrs. D. Frank in a log cabin that summer.

In 1857 James H. Lane, a prominent Free State political leader, was made the president of the Doniphan Town Company and moved to the town. He soon acquired a large part of the townsite, known as “Lane’s Addition”, and due to his influence, the government land office was located in Doniphan that year, bringing more prominence to the town.

In April 1857, James F. Forman purchased a sawmill valued at $2,500 and set it up on the bank of the river, near the Collins mill. Forman also built a flouring mill near Spring Creek at a cost of $1,300. The 40-room St Charles Hotel was also built in 1857. Several church organizations were established early on and some small frame structures were built in the town around this time, including St. John’s Catholic Church, perched atop the river bluffs. At this time, Doniphan had become an important political and commercial center and was called home to about 1,000 people, while nearby Atchison had only 200 residents.

By 1858, pro-slavery principles were becoming unpopular in Kansas and the Constitutionalist newspaper was discontinued. It was soon replaced by the Crusader of Freedom, a Free State newspaper. However, this newspaper was short-lived. 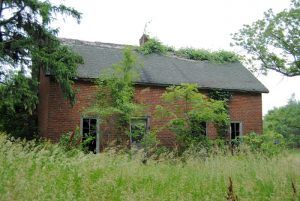 An overgrown building in Doniphan, Kansas today by Kathy Weiser-Alexander.

Political rivalry caused the removal of the Government Land Office from Doniphan to Kickapoo in 1859, which saw the beginning of the decline of the town. However, glowing reports still resounded regarding the town. In James Redpath’s Handbook to Kansas Territory, published in 1859, he presented an optimistic view, stating:

“Doniphan, it is admitted by everyone, has the best rock-bound landing, and the best townsite on the Missouri River anywhere above St. Louis. It has running through it, a fine stream of water, which by a trifling outlay which will soon be expended, can be made to flow through five of the principal streets. A wealthy company has been chartered for the construction of a railroad for St. Joseph, through Doniphan, for Topeka, connecting the Kansas and Missouri Rivers. The stock is subscribed — ten percent paid in. That part of it from St. Joseph to Doniphan will be completed as soon as the connection is made with Hannibal. Lots can be purchased at Doniphan on more liberal terms than at any other town on the Missouri. We say to the emigrant, come to Doniphan; believing as we do, that it is destined to be the great emporium of the upper Missouri. The population is about one thousand.” 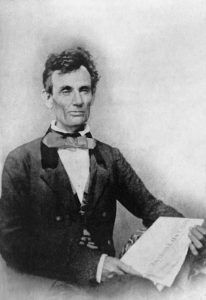 In 1859, James H. Lane moved to Leavenworth and later that year, in December, aspiring presidential candidate Abraham Lincoln believed Doniphan to be important enough to visit. There, he spoke to the townspeople and stayed in the area for eight days campaigning. During this year, Forman’s Flouring Mill was destroyed by fire and a new mill of about the same capacity was at once erected and put in operation.

In 1860, the St. Charles Hotel, built in 1857, was destroyed by fire and the next year, when the Civil War began, Doniphan’s population declined sharply. The same year, the Doniphan Post newspaper began but lasted only about one year.

In 1861, Forman’s Flouring Mill burned again and afterward, James Forman retired from this branch of business and it was never rebuilt.

Doniphan’s population recovered after the Civil War and several brick buildings were erected, including a large warehouse. In 1865, the Catholic Church and residence burned down and two years later the new St. John the Baptist Catholic Church was constructed from brick on land donated by Adam Brenner, who was known for his expansive vineyards and wine operation. The new brick structure measured 26 x 50 feet and included a stately bell tower with a fine-toned bell weighing nearly half a ton. A cross gable wing measuring 24×36 was added around 1868. The church never had a residing full-time priest but was provided visiting priests from the Benedictine Abbey in Atchison. Today, the brick church is one of few significant structures that remain standing in Doniphan.