Navajo. Arizona is a small village located just south of I-40 that was once was a stop on the Beale Wagon Road and later on old Route 66. It is located about seven miles west of Chambers.

This small town was first called Navajo Springs because of seeps in a meadow that provided a good grazing spot for travelers’ horses. The site was first noted by white men when Lieutenant Amiel W. Whipple passed through the area in 1853 and observed a “fine pool of water which breaks through the surface of the valley.” Four years later, in September 1857, when Lieutenant Edward Fitzgerald Beale was scouting for a wagon road through the area, he found Whipple’s trail and “Navajo Springs.”

It soon developed as a rest stop for travelers, and in December 1863, the first gubernatorial party for Arizona crossed from New Mexico to Arizona. However, as they were unsure where the border between the states was, they proceeded to Navajo Springs, where on December 29th, they held a ceremony to organize the new government. The first territorial governor of Arizona, John Noble Goodwin, was sworn in by Richard Cunningham McCormick, the first secretary of the territory and Goodwin’s eventual successor. Raising the flag and cheering, they dined on fresh antelope steaks as well as champagne they had brought for the occasion. This was the territory of Arizona established.

In the meantime, Route 66 was built through Navajo Springs, which was later bypassed by Interstate 40. But by the late 1980s, the lands were once again occupied by Navajo Indians, many of whom were “refugees” from a Navajo–Hopi land dispute. Today, the community is almost exclusively Native American, and a permit is required from the Navajo Nation for off-road travel in the area. The Beale Wagon Road was a precursor of the transcontinental railroad, built through the area in 1882. At the insistence of the Santa Fe Railway Company, the Navajo were forcibly moved away from the Navajo Springs area. By the 1930s, all allotted lands within the area were extinguished, and the lands forcibly vacated. 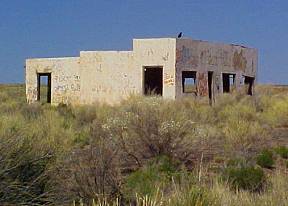 To continue the westward journey on Route 66, continue on I-40 from Navajo. Five miles to the west is an old alignment of Route 66 at Exit 320 (Pinta Rd.). Situated on the east of the Petrified Forest, the road dead ends, and travelers will have to return to Exit 320 to continue the journey. However, many Route 66 enthusiasts enjoy taking a trek along this road to see the ruins of the old Painted Desert Trading Post.

Heading west, between the towns of Navajo and Holbrook, travelers will pass by the striped desert vistas of Arizona’s postcard-perfect Painted Desert before arriving at the Petrified Forest National Park, which displays 200-million-year-old fossils.