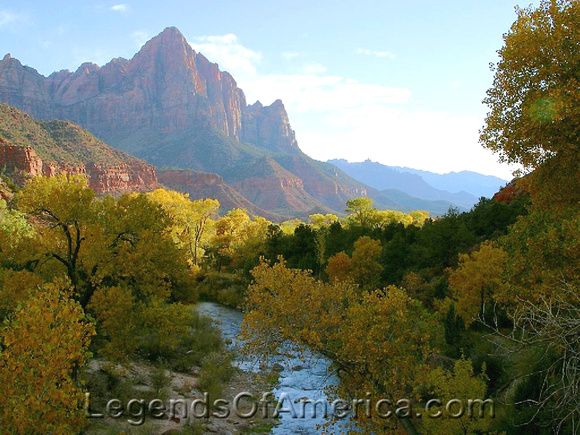 Located in southwest Utah, Zion National Park encompasses 229 square miles of high plateaus, a maze of narrow, deep sandstone canyons, and soaring rock towers and mesas created by the wild and sometimes raging Virgin River throughout the eons. Utah’s oldest national park is also the most visited in the state, with some three million people coming through every year. 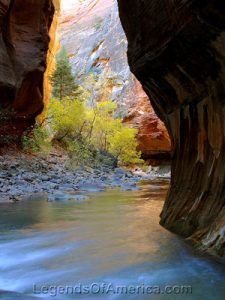 The park has been inhabited by people for approximately 12,000 years when they first hunted mammoths, giant sloths, and camels before these animals were over-hunted and died out some 8,000 years ago. The nomadic people then turned to hunting smaller animals and gathered wild plants, seeds, and nuts. About 2,000 years ago, the region was populated with the Ancient Puebloans, who practiced farming. Unlike their eastern counterparts who constructed monumental structures, such as those in Chaco Canyon, New Mexico, the Ancient Puebloans lived in small seasonal pueblo groups of only a few rooms.

Subsisting on corn, beans, and squash, which they grew utilizing canal irrigation, and gathered pine nuts and wild plants, they also hunted small game, including deer, turkey, and rabbits. However, about 800 years ago, the Ancient Puebloans moved southeast, probably due to drought and overuse.

For several centuries, co-existing in the region were the Fremont Indians, who flourished between 400 A.D. to 1350 A.D. living in semi-subterranean “pit houses” and rock shelters. They, too, were farmers but relied more heavily on hunting and foraging for wild foods. Like the Ancient Puebloans, they also disappeared from the region about 1350 A.D.

Researchers believe that both these groups left due to extended droughts in the 11th and 12th centuries, catastrophic flooding, and perhaps their inability to compete with the Paiute and Ute Indians, who were more accustomed to desert seasons moved into the region around A.D. 1100.

The Ute and Paiute occupied the region exclusively for the next three centuries, living a mobile lifestyle and primarily hunting and collecting wild plants. However, the Southern Paiute also planted corn, sunflowers, and squash fields to supplement their diets.

Euro-Americans’ exploration and settlement began in the late 1700s, first by traders from New Mexico who blazed the Old Spanish Trail, which followed the Virgin River for a portion of its length. 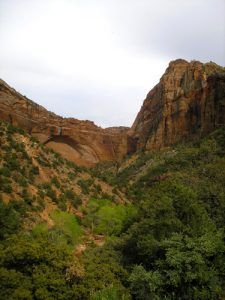 A view from Zion National Park. Photo by Kathy Weiser-Alexander

In the next century, American fur trappers and government surveyors added new overland travel routes across the region, and beginning in 1847; the Mormons began to settle in Utah. By the 1860s, there were numerous Mormon settlements in the area, including Shunesberg, Springdale, Grafton, Adventure, and Paradise along the upper Virgin River. In 1863, Issac Behunin built the first log cabin in Zion Canyon near the Zion Lodge location. Soon the canyon was dotted with other homesteads.

During the remainder of the century, the small communities and homesteads struggled to survive. Catastrophic flooding by the river, little arable land, and poor soils made agriculture in the upper Virgin River a risky venture. Some of these settlements, including Shunesberg and Grafton, were ultimately abandoned for more favorable locations.

By the first decade of the 20th century, the scenic qualities of southern Utah, and Zion Canyon, in particular, had been recognized as a potential destination for tourism. In 1909, a presidential Executive Order designated Mukuntuweap National Monument; however, in 1917, when the acting director of the newly created National Park Service visited the canyon, he proposed changing its name Zion from the locally unpopular Mukuntuweap. However, the new monument was virtually inaccessible to visitors since the existing roads were in poor condition and the closest railhead a hundred miles away.

The Utah State Road Commission, established in that year, began construction on a state highway system that would eventually improve access to the southern region. State officials also negotiated with the Union Pacific Railroad to develop rail and automobile links and tourism facilities in southern Utah. By the summer of 1917, touring cars could finally reach Wylie Camp, a tent camping resort that comprised the first visitor lodging in Zion Canyon. 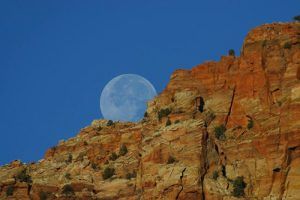 In 1919, a Congressional bill designating Zion National Park was signed into law. Visitation to the new national park increased steadily during the 1920s, particularly after the Union Pacific extended a spur rail line to Cedar City. The Utah Parks Company, a subsidiary of the Union Pacific, acquired the Wylie Camp in Zion and offered ten-day rail/bus tours to Zion, Bryce, Kaibab, and the North Rim of the Grand Canyon. Construction on the Zion Lodge complex, designed in “Rustic Style” by architect Gilbert Stanley Underwood, began in the mid-1920s. In 1930, the newly completed Zion-Mt Carmel highway, including a 5,613-foot tunnel through the sandstone cliffs, allowed motorists to travel through the Zion National Park. This highway was one of the greatest engineering feats of modern times, and at the time, the tunnel was the longest of its type in the world. Today, the Zion-Mount Carmel Highway can be traveled year-round; however, access for over-sized vehicles requires a special permit and is limited to daytime hours, as traffic through the tunnel must be one way to accommodate large vehicles.

Compiled and edited by Kathy Weiser/Legends of America, updated March 2021.