The Painted Desert of Arizona by Dave Alexander.

From New Mexico, Route 66 continues westward into Apache County, Arizona, where travelers will move through Navajo country, which includes the Painted Desert, the Petrified Forest, and more than a dozen small towns, of which, many are little more than a single trading post, and of others, nothing but a ghost town. 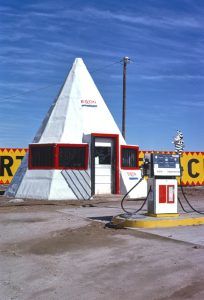 Vintage photo of an Exxon Station on Route 66 in Allentown, Arizona by John Margolies, 1979. 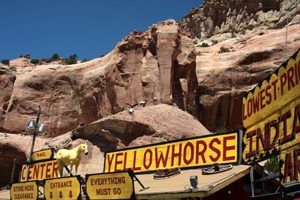 The Painted Desert is the badlands of the Four Corners area, which runs from the Arizona-New Mexico area to the east end of Grand Canyon National Park. It is known for its brilliant and varied colors, which not only include the more common red rock but even shades of lavender.

The Painted Desert was named by an expedition under Francisco Vázquez de Coronado on his 1540 quest to find the Seven Cities of Cibola. He named the area El Desierto Pintado, meaning “The Painted Desert” for its many colors. Much of the Painted Desert is located within the Petrified Forest National Park. More is located to the north of I-40 on the Navajo Nation, where off-road travel is allowed by permit. 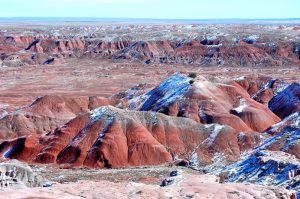 Snow on the Painted Desert by Dave Alexander.

Beautiful vermilion cliffs surround the highway on both sides as travelers enter Arizona, setting the tone for the highly colored drive they are about to take. Through this section, travelers can truly get a feel of what might the Mother Road was like during its heydays — the small towns are still small towns, many of the Indians continue to make their living from the trading posts, and though not always in very good shape, original sections of the old pavement lie intact upon this section of Arizona’s high desert.

The original road from Lupton to Chambers closely follows I-40, mostly to the north of the interstate. There are pieces through here where the original road is in bad shape and turns to gravel or dirt. From Chambers to Holbrook, the old road simply disappears or is on private property. There are exits from the interstate to the sites that travelers may want to see through the Painted Desert, so the best bet might be to stay on I-40 from Lupton west to Holbrook.