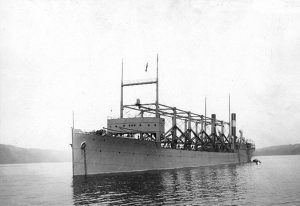 A massive carrier ship that supplied fuel to the American fleet during World War I, the USS Cyclops, along with her 309 crew members and passengers went missing in the area of the Bermuda Triangle sometime after March 4, 1918, and was never seen again.

The ship, named for the Cyclops, a primordial race of giants from Greek mythology, was first launched on May 7, 1910, by William Cramp and Sons of Philadelphia, and placed in service to the Navy on November 7, 1910. Operating with the Naval Auxiliary Services, she voyaged the Baltic Sea from May through July 1911 supplying Second Division ships before returning to Norfolk, Virginia. She then operated on the east coast from Newport, Rhode Island, to the Caribbean, servicing the fleet. During the United States occupation of Veracruz in Mexico in 1914–1915, she fueled ships on patrol and evacuated refugees.

When the United States joined in World War I, the Cyclops was commissioned on May 1, 1917, and joined a convoy for Saint-Nazaire, France, in June 1917. She returned to the United States the next month where she served along the east coast until  January 9, 1918. The ship was then assigned to the Naval Overseas Transportation Service and sailed to Brazilian waters to fuel British ships in the south Atlantic.

In Rio de Janeiro, Commander Worley reported that the Cyclops’ starboard engine was inoperative because it had a cracked cylinder reducing her speed to 10 knots. As a result, the ship was ordered to return to the United States for repairs. On February 15, 1918, the ship departed Brazil carrying more than 12,000 tons of manganese ore used to produce munitions. Five days later she stopped in Salvador, Brazil on February 20th. After two days, she set sail again headed to Baltimore, Maryland with no scheduled stops. However, the ship deviated to Barbados along the way, landing on March 3rd, some 1,800 nautical miles from its destination. The Cyclops left the next day and was never seen again.

The Cyclops was scheduled to reach Baltimore on March 13th and when she didn’t, a massive search including boats and planes was initiated along her entire course. However, no trace of the ship, debris, or survivors was ever found.

On June 1, 1918, Assistant Secretary of the Navy Franklin D. Roosevelt declared Cyclops to be officially lost, and all hands deceased.

So, what happened to USS Cyclops?

Though the Naval History & Heritage Command has stated she “probably sank in an unexpected storm”, the actual cause of the ship’s fate is unknown.

Several other theories exist including sabotage. Captain Worley had often been accused of being pro-German and was disliked by many of his officers and staff. Later it was found that the captain actually was German-born and had changed his last name. Also boarding the ship in Rio de Janeiro was American Consul-General Gottschalk, purportedly to return to the United States to enlist in the US Army. However, Gottschalk was known to have been very popular among the German community in Brazil. Did one or both of these gentlemen conspire to destroy the ship? Why was there no SOS call made by the captain?

A second theory is that the ship was simply not seaworthy while carrying such a heavy load. Reportedly the ship’s maximum load capacity was 8960 tons, but, she had taken on more than 12,000 tons of ore in Brazil. Reports of the unscheduled stop in Barbados indicate the Cyclops had landed due to the water level being over the Plimsoll line, indicating an overloaded condition. However, investigations in Rio proved the ship had been loaded and secured properly, so the ship moved on. Did its overloaded condition coupled with the cracked engine cylinder cause the Cyclops to sink?

Was the ship blasted by a German underwater mine or torpedoed by a German Sub? US Navy claims that such a possibility does not exist if the ship had been on its right course. However, had the ship been off its track by a large margin, there was a high possibility of that to happen and the ship would have perished. However, German authorities at the time, and subsequently, denied any knowledge of the vessel.

Though the Navy conducted a full investigation and provided a 15,000-page report, filled with facts and evidence, no final conclusion was ever made as to the Cyclops‘ disappearance. Instead, the report concluded, “Many theories have been advanced, but none that satisfactorily accounts for her disappearance.”

This summation was written, however, before two of Cyclops‘ sister ships, the Proteus and Nereus, vanished in the North Atlantic during World War II. Both ships were transporting heavy loads of metallic ore similar to that which was loaded on Cyclops during her fatal voyage. In both cases, it was theorized that their loss was the result of catastrophic structural failure.

Afterward, it was theorized that all three ships sank due to structural failure. It is known that Cyclops’ sister ships suffered from issues with the I-beams that ran the length of the ship, which had eroded due to the corrosive nature of some of the cargo carried. This problem was also seen in other similar freighters, one of which was known to have snapped in two in calm seas.

Did the USS Cyclops sink to the ocean floor because of one of these reasons or does the answer lie with the many other missing vessels that have succumbed to the mysteries of the Bermuda Triangle?

The disappearance of the Cyclops remains the single largest loss of life in U.S. Naval history not directly involving combat. 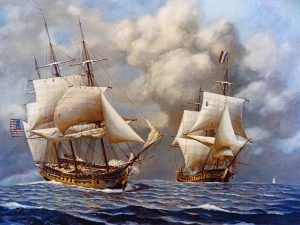 Originally, a 40-gun frigate of the French Navy, L’Insurgente was built by Pierre-Joseph Pénétreau at Lorient, France and launched on April 27, 1793. Five years later, in 1798, the Quasi-War, which was also known as “The Undeclared War with France,” the “Pirate Wars,” and the “Half War,” erupted. This undeclared war, fought almost entirely at sea between the United States and the French Republic, began due to the failure of the United States to repay its considerable debts to France, incurred during the American Revolution. When the French crown was toppled during the French Revolutionary Wars,  the United States refused to continue repaying its debt to France on the grounds that it had been owed to a previous regime. This resulted in France retaliating with privateering attacks against American vessels. In response, the United States went on the offensive and sent four naval squadrons into the Caribbean to seize armed French vessels and prevent privateers from attacking American ships.

One of the squadrons included the USS Constellation under the command of Commodore Thomas Truxtun which came upon the L’Insurgente on February 9, 1799 northeast off Nevis. When the French ship fired on the Constellation, a battle ensued that lasted over an hour, in which the Americans comprehensively outmaneuvered the crew of L’Insurgente, forcing her to surrender.

When the Americans boarded the French vessel, they found that she had lost 70 70 men from a crew of 409, while the Constellation, though badly damaged had lost only three of her crew of 309 men.

This was the first post-Revolutionary War American victory against a foreign naval ship.

Afterward the frigate was taken to the West Indies and refitted for service in the American navy. Renamed the Insurgent, she then cruised with the USS Constellation until May, 1799, winning many victories and capturing five more ships before returning to the United States in early 1800. On April 29, 1800, Patrick Fletcher assumed command and was ordered to cruise between the West Indies and the American coast to protect American shipping interests and to capture any enemy vessels he encountered.

On July 22, 1800, the Insurgent departed Baltimore, Maryland, and after a brief stop at Hampton Roads, she sailed southward on August 8th. She was never heard from again and was presumed to have been caught in a severe storm that struck the West Indies on September 20, 1800.

That same month, the Quasi-War ended with the signing of the Treaty of Mortefontaine.