There are dozens of missing and unexplained disappearances of American ships and boats where no evidence of the ship or crew has ever been found. Here are just some of the notable ones lost. 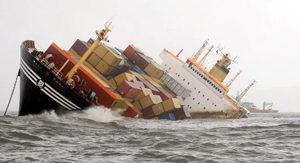 SS Baychimo – Disappeared in the Arctic

SS Poet – Victim of the Atlantic 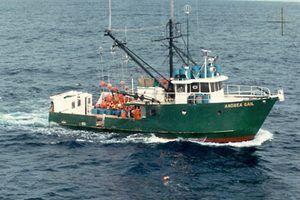 A fishing trawler, the Andrea Gail was lost at sea with its six crew members during the “Perfect Storm” of 1991. The 72-foot commercial fishing vessel was built in Panama City, Florida in 1978 and owned by Robert Brown. Holding a crew of six, she was in commission for 13 years before vanishing on a trip to Newfoundland.

The Andrea Gail and her six-man crew had been fishing in the North Atlantic Ocean out of Gloucester, Massachusetts. On September 20, 1991, the Andrea Gail along with a fleet of about 25 sword fishing  vessels, set out from Gloucester for the last fishing trip of the season bound for the Grand Banks of Newfoundland off the coast of eastern Canada. Loaded with ice, the crew hoped to catch some 40,000 pounds of swordfish — the sooner the better, so they could get back home and share in the profits.

But, the crew wasn’t catching as many fish as they had hoped and by the middle of October, they had barely enough fish to break even. As a result, Captain Frank William “Billy” Tyne headed east to the Flemish Cap where he believed they would have better luck. At some point, the ship’s ice machine began to malfunction and would be unable to maintain the catch for much longer. Tyne then made the decision to set a course for home on about October 26th despite weather reports of dangerous conditions.

They were off the coast of Newfoundland when a high-pressure system slammed into a low-pressure system, which then merged with the remains of Hurricane Grace, creating what has been dubbed “the perfect storm.” Battered by massively powerful winds and waves as high as 100 feet, Captain Tyne’s last radio transmission noted: “She’s comin’ on boys, and she’s comin’ on strong.” Her last reported position was 180 miles northeast of Sable Island at 6:00 p.m. on October 28, 1991.

The devastating storm battered the coast of New England and Canada, and after the worst of it had passed and the Andrea Gail had failed to return to port, a number of rescue missions, including the New York Air National Guard, the U.S. Coast Guard, and the Canadian Coast Guard set out on an extensive air and sea search. Though they covered 186,000 square nautical miles, nothing was found but the ship’s emergency beacon and a few pieces of debris. After a week of searching, the Andrea Gail and her crew were declared lost.

The story of the storm and the imagined fate of the Andrea Gail and her crew was later told in the book The Perfect Storm by Sebastian Junger, as well as a Hollywood movie of the same name.

The SS Baychimo – Disappeared in the Arctic 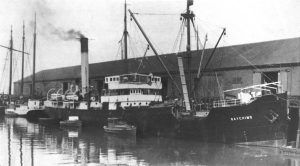 A modern maritime mystery, some would call the SS Baychimo ghost ship. Abandoned in 1931, she continued to sail without a crew for decades — last being sighted in 1969.

The large 1,322-ton steam-powered cargo ship, initially called the Angermanelfven, was first launched in 1914  by the Lindholmens shipyard in Gothenburg, Sweden. The 230-foot long ship was first used on trading routes between Hamburg and Sweden until World War I began in August 1914. When the war was over, she was transferred to the United Kingdom as part of Germany’s reparations for shipping losses. The ship was acquired by the Hudson’s Bay Company in 1921 and rechristened the Baychimo. Based out of Ardrossan, Scotland, she was primarily utilized for transporting furs from northern Canada, but also sometimes carried other cargo and passengers. Trading with the Inuit settlements along the coast of the Northwest Territories of Canada, she made nine successful journeys, before her luck ran out in 1931.

At the end of a trading run on October 1, 1931, the Baychimo was loaded with fur pelts. Winter had come early that year and the crew and the ship were unprepared for the bitter weather. As they sailed along the choppy waters, a blizzard hit them, bringing with it with chunks of ice that surrounded the ship, eventually completely trapping the vessel in pack ice. Unable to continue the voyage, the captain ordered the crew to disembark and make their way on foot across the shifting ice floes to the town of Barrow, Alaska, over a half-mile away. There, the crew took shelter for two days before returning to check on the status of their abandoned ship. What they found was that the Baychimo had broken free of the ice and was aimlessly drifting about the sea. They then built a camp on the ice where they could keep an eye on the vessel. The severe weather continued and the ship was once more mired down in ice on October 8th.

On October 15th with the weather conditions showing no signs of letting up, the Hudson Bay Company sent an aircraft rescue party to evacuate the camp. Although 22 of the crew were rescued, the captain and 14 other crew members refused to abandon their ship and its cargo and opted to remain camped out on the ice despite the punishing storm. Receiving provisions from the company, and building a wooden shelter, they were prepared to stubbornly wait out the entire winter if required. On November 24th, a powerful blizzard struck the region once again and when it was over the Baychimo had disappeared. Her captain came to the conclusion that the ship must have broken up during the storm and sunk.

However, a few days later an Inuit seal hunter came upon the camp telling the Captain and the remaining crew that he had sighted the ship about 45 miles away. The vessel was then found, but determining it was unlikely to survive the winter, the most valuable cargo was offloaded and the Baychimo was finally abandoned in the icy sea.

Though the ship should have been destroyed in the winter storms, no one gave her the credit she deserved, as she would be repeatedly sighted across the Arctic, drifting aimlessly for more than three decades. People managed to board her several times, but each time they were either unequipped to salvage her or were driven away by bad weather. The last time she was boarded was in 1939. But, still, she drifted across the Arctic unmanned, seen close to shore at times, and at others far out to sea. The ship was last seen frozen in an ice pack in 1969, 38 years after she was abandoned. This is the last recorded sighting of Baychimo.

In 2006, the Alaskan government began work on a project to solve the mystery of “the Ghost Ship of the Arctic” and locate Baychimo, whether still afloat or on the ocean floor. However, the ship nor any trace of wreckage was found.