A wintertime view of the Yellowstone River in Yellowstone National Park by Carol Highsmith.

Yellowstone, the oldest U.S. National Park, attracts some three million visitors every year to experience its many wonders. Located in the states of Montana, Wyoming, and Idaho, Yellowstone covers 3,470 square miles, primarily in the northwest corner of Wyoming. Famous for its geysers, hot springs, and free-ranging wild animals, Yellowstone is a seasonal wonder, offering an abundance of activities for all ages and interests!

Some 640,000 years ago Yellowstone and its scenic views were formed when a colossal volcanic eruption ejected an immense volume of ash that covered all of the western U.S., much of the Midwest, northern Mexico and some areas of the eastern Pacific Coast. Leaving a volcanic depression some 30 miles wide by 45 miles long, the eruption created what the early American pioneers referred to as “the place where hell bubbles up.”

Geothermal wonders, such as Old Faithful, are evidence of one of the world’s largest active volcanoes, which typically erupts about every 600,000 years. 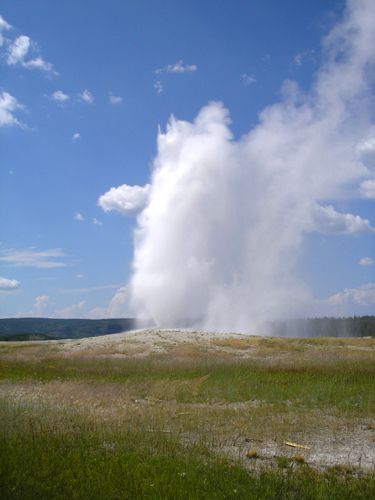 Though providing spectacular features that bemused and befuddled the park’s earliest visitors, the volcano is known to have been the largest to have ever occurred on Earth, resulting in the worldwide population falling to as little as 10,000 people. 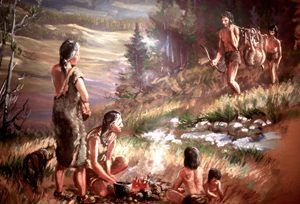 The park was named for the yellow rocks seen in the rocky cliffs along the northern portion of the Yellowstone River. The iron in the rocks casts causes them to cast a yellow tint that the Native Americans first called “Mitzi-a-dazi,” or the “River of Yellow Rocks.” Later French fur trappers translated this to “Yellow Rock” or “Yellow Stone.”

Gathered from archeological evidence, Native American history here is said to date back as far as 12,000 years. These earliest people were known to have been primarily hunter-gathers who utilized significant amounts of obsidian to make cutting tools and weapons. They may also have practiced some crude farming activities. Arrowheads made of Yellowstone obsidian have been found as far away as the Mississippi Valley indicating that a regular obsidian trade existed between Yellowstone Native Americans and tribes further east.

In 1806, when the Lewis and Clark Expedition moved through the area, a man named John Colter left the expedition, joining a group of fur trappers. Colter is credited as being the first non-Native American to visit the region and make contact with the Indians. These Native Americans referred to as Sheepeaters, were a band of Shoshone, who survived by hunting for bighorn sheep and fishing the headwaters of the Snake, Madison, and Yellowstone Rivers.

Colter spent the winter of 1807-08 traveling, trapping, and exploring Yellowstone, before moving down into what would be known as Jackson Hole, and crossing the Grand Tetons into Idaho. However, his adventure ended when in the fall of 1808, he was captured by Blackfoot Indians. Stripped naked, Colter was somehow able to escape. When he returned to Missouri from his adventures, people mocked his stories of steam rising from the earth and boiling mud as mad hallucinations, earning Yellowstone its first name as “Colter’s Hell”.

In 1857, mountain man, Jim Bridger led an expedition to Yellowstone. He also returned with stories of boiling springs and spouting water; however, because he had already earned a reputation of one to tell “tall tales,” his accounts were largely ignored.

Tall tales or no, the stories told by Colter and Bridger aroused the interest of explorer and geologist Dr. Ferdinand V. Hayden. In 1859, Hayden began a survey of the upper Missouri River region, accompanied by U.S. Army surveyor W.F. Raynolds and Jim Bridger acting as a guide.

Unfortunately, the party was unable to reach the Yellowstone region due to heavy snows. Afterward, the Civil War stopped all attempts to further explore the region and Hayden would not be able to fulfill his mission to explore the area for another eleven years. 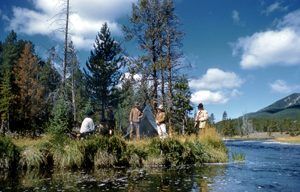 Re-enactment of Washburn-Langford camp in Yellowstone, 1960.

Before Hayden could return another expedition was organized by a group of Montanans in 1870. Referred to as the Washburn-Langford-Doane Expedition, the group was led by the surveyor-general of Montana Henry Washburn. Also part of the group was a man named Nathaniel P. Langford, who would later become known as “National Park Langford” and the first superintendent of Yellowstone Park. Spending about a month exploring the region, the expedition named many of the sites of interest, that continues to be used today.

In the meantime, Dr. Hayden had been working with the government to sponsor a second expedition to Yellowstone and discussions were already in progress to make Yellowstone a National Park. In early 1871, the U.S. Geological Survey sponsored Hayden’s second trip to the park. Along with Hayden were naturalists, geologists, a landscape artist, and two photographers.

Closely following the Washburn-Langford-Doane Expedition, the group compiled a comprehensive report on Yellowstone, including photographs and paintings which helped to convince the U.S. Congress to create Yellowstone National Park on March 1, 1872. 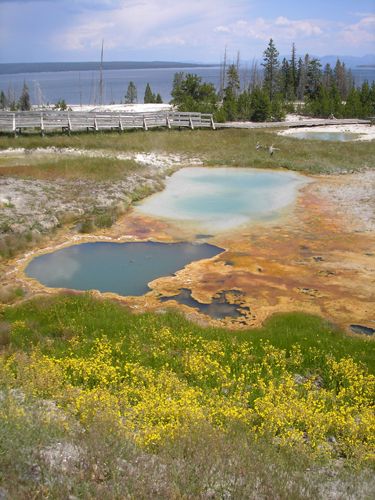 Nathaniel P. Langford, who had been on the earlier 1870 expedition was appointed as the first superintendent of Yellowstone. However, there was no money available for a salary, so he was forced to make his living elsewhere. During his five year term, he entered the park only two times, the first as a guest for yet another Hayden Expedition in 1872, and the second to evict a man who claimed ownership of Boiling River, a natural spring within the park.

The second superintendent was a man named Philetus Norris, who volunteered for the position. Reporting on the problems that he witnessed first hand, Congress finally provided funds for a salary, as well as a minimal amount to operate the park.

As a result, the park turned to the U.S. Army for help. In August 1886, the army arrived to begin what would be more than 30 years of military presence at Yellowstone. 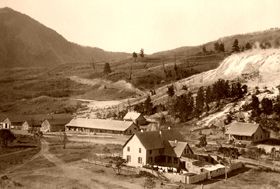 After living in temporary frame buildings at Camp Sheridan and enduring five cold winters, the Army realized there was no end in sight for the assignment and asked Congress for funds to establish a permanent post.

Fort Yellowstone was completed by late 1891 and as more troops were needed, additional buildings were constructed including officers’ quarters, a guardhouse, headquarters, stables and barracks for the enlisted men.

At the height of the Army’s presence in Yellowstone in 1910, there were 324 soldiers stationed at Fort Yellowstone. The Army continued to manage the park until 1918 when the newly established National Park Service assumed the management.

Today, Yellowstone is one of the most popular national parks in the United States due to its numerous natural wonders. Visitors to the park will experience the sights of hot springs, canyons, geysers, lakes, and abundant wildlife. Activities for visitors include fishing, boating, hiking, camping, not to mention the opportunity to view wildlife which includes buffalo, moose, bighorn sheep, elk and more.

A couple of notices to potential visitors include:

Lodging, ranging from hotel to cabin accommodations, exists at eleven locations within the park boundaries. 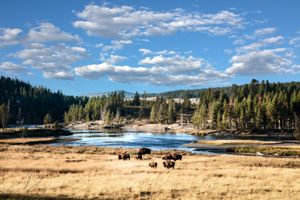 Buffalo on the move in Yellowstone National Park, Wyoming by Carol Highsmith.

The Yellowstone Tragedy, a Legend

There are more people hurt by bison than by bears each year in Yellowstone. Park regulations state that visitors must stay at least 25 yards away from bison or elk and 100 yards away from bears.