A windmill against the backdrop of a stormy sunset in Amarillo by Dave Alexander.

Almost immediately after leaving the rolling hills of Oklahoma, travelers feel different as they enter the vast plains of the Texas Panhandle. It is easy to imagine how it might have once been to be a lone-rider in the midst of what was a wild and primitive country just a little more than a century ago. It is here that old Route 66 stretched across the Llano Estacado (the Staked Plains) and where the romance of cattle-driving days still drifts through the many small towns of the Texas Prairie. 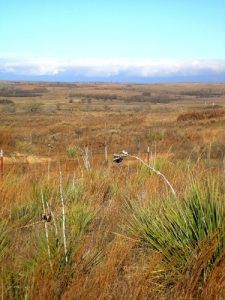 As for the Mother Road, when you glance at a map, Route 66 looks as if it is easy to follow. Though more than 150 miles of the original 178 miles that crossed Texas still remain, you will actually need to keep your eyes wide open in order to not miss the vintage architecture and many landmarks that dot the landscape.

The only sections of original Route 66 not available are between Jericho and Alanreed and Adrian to Glenrio. Otherwise, Route 66 still exists even with original concrete paving in some places.

Route 66 primarily lies to the south of I-40 between Texola and Amarillo except at McLean. And from Amarillo west to Glenrio, the Mother Road mostly lies to the north side of the interstate. However, that being said, the road underwent many transformations over the years as the road was paved, new alignments were created, and the interstate was born. As such, the old road zigs and zags from one side of I-40 to the other with little, in the way of signs, to direct you. So, get a few good maps, plan your trip, and prepare to take it slow as you savor the sights of not only the Mother Road but a glimpse at the Wild Wild West.

If you are not dedicated to driving the “original” piece of concrete, Route 66 is a fairly easy route through as you follow I-40. All of the old Route 66 towns have an exit that can easily be accessed from I-40. Pick and choose what you want to see and take the easy off-ramps, which are usually designated as Business I-40. 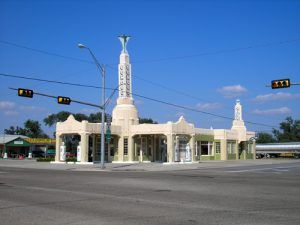 Starting your journey at Texola, follow the south service road along I-40 into Shamrock, home of the famous U-Drop-Inn. As you skirt around town, get a look at the old motel district and other vestige remains of Shamrock’s heyday along the thriving road.

After leaving Shamrock, the south frontage road is one of the most authentic stretches of the old road in existence and you’ll know it as you feel the thumpety-thump of the old road. Soon, you’ll pass through the ghost town of Lela before entering McLean, home of the Texas Route 66 Association and a true Main Street USA city. McLean houses the Devil’s Rope Museum/Texas Route 66 Exhibit complex, an historic Main Street, and the first Phillips 66 station in Texas, which has been beautifully restored.

Resuming your journey, you will soon reach Alanreed, which contains the oldest cemetery and oldest church along the Texas route. This, now almost ghost town, once housed the popular Regal Reptile Ranch. Today, its crumbling buildings and closed businesses attest to its loss of the Mother Road. 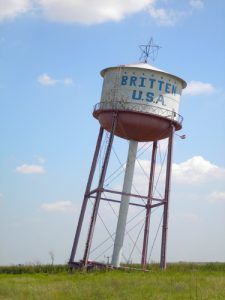 Britten, USA water tower just west of Alanreed on I-40 by Kathy Weiser-Alexander.

Beyond Alanreed, is the infamous Jericho Gap where old Route 66 travelers were often left stranded in the wet black soil. Most of this original road is missing segments and is partly on private property so it cannot be traveled. After returning to the south service road, keep your eyes open for the Britton Leaning Water Tower before reaching Groom.

In Groom, you can see the tallest Cross in the Western Hemisphere.

Soon, you will arrive in Amarillo, one of the few places where the Old West is only steps away from a modern 21st-century city. It is surrounded by working ranches that are essentially unchanged from the late 1800s in their day-to-day operations. In 1921, a long stretch of Sixth Avenue became the first paved roadway in Amarillo, a portion of which, Route 66 would later follow. Today the historic Mother Road continues to run through the city along Amarillo Boulevard, 6th Avenue, Bushland Boulevard, and 9th Avenue. Along this path are several old motels, restaurants, and historic buildings. Be sure to stop at the Big Texan Steak Ranch, which has been doing business in Amarillo since 1960. It started out on original Route 66 and later moved to I-40. The Nat Ballroom on Sixth Avenue, which once featured such stars as Willie Nelson, is now home to over 100 vendors. 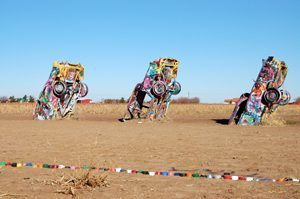 Be sure to watch for the Cadillac Ranch, with its iconic art display of buried Cadillacs, just west of Amarillo as you move on toward the tiny towns of Bushland, Wildorado, and Vega.

Persisting on to Adrian, watch to the north for two old Route 66 bridges. In Adrian, you can see the Mid-Point Water Tower and visit the Midway Café that has served travelers for ages. The service road dead-ends just west of Adrian and the old route completely disappears until a mile before you reach Glenrio.

Glenrio is a definite “must-stop” on the vintage path, where many original buildings of this Texas ghost town can still be seen. Glenrio was completely wiped out by the Mother Road’s demise. 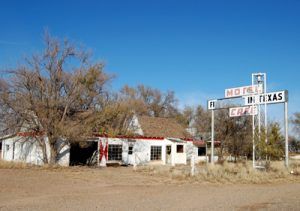 Start your journey now in Shamrock for a picturesque peek at the history of Route 66 as well as a little bit of the Old West.