The Cadillac Ranch is a public art installation and sculpture on Route 66, just west of Amarillo, Texas. The site features ten half-buried Cadillacs, nose-first in the ground that are colorfully sprayed with graffiti today.

Several myths have been perpetuated about the origin of the Cadillac Ranch, the most popular of which is the one I heard growing up in the Texas Panhandle. As the story went, an eccentric Amarillo, Texas millionaire would buy one Cadillac after another, and when it was time to buy a new one, he would have the old one buried nose first on his land. However, the truth is, the Cadillac Ranch was a planned artistic endeavor.

Yes, Texas millionaire Stanley Marsh, 3 was an eccentric. He was also said to be very down to earth, quickly disregarding the “III” as too pretentious and using “3” instead. In 1973, Marsh invited a San Francisco artists’ collective called the Ant Farm to help him create a unique work of art for his sprawling ranch just west of Amarillo.

The group set about acquiring ten used Cadillacs, ranging in model years from 1948 to 1963. Built along with the tattered remains of historic Route 66, the cars represented the “Golden Age” of American automobiles. Most of the cars were purchased from junkyards and averaged about $200. The cars were then buried nose-down, facing west along the old highway. Those that could run were driven into the half-burial holes; the rest were hoisted in. In 1974 the project was completed, and in no time at all, visitors began to come from all over the world, leaving their mark on the ever-thickening graffiti-covered cars.

At first, the cars displayed their original paint jobs – turquoise, banana yellow, gold, and sky blue, but barely was the monument complete when people were scratching or painting their names in the cars. Over time, vandals and souvenir hounds smashed the windows, making off all the chrome, radios, speakers, and even some of the doors. The wheels have since been welded to the axles to prevent more theft. However, Marsh still says, “We think it looks better every year.” 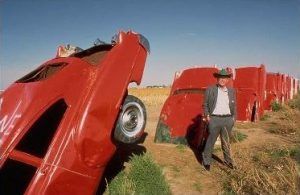 In 1997, the Cadillac Ranch was exhumed and replanted about two miles to the west to escape Amarillo’s encroaching city. Under Marsh’s orders, even the old site’s trash and clutter was gathered from the old location and spread around the new location. Otherwise, the monument remained the same (and ever-changing) since it was erected.

Marsh encouraged visitors to visit the Cadillac Ranch and seemingly didn’t mind the constant graffiti added to the cars.

However, Marsh had many other “artistic endeavors” in Amarillo, one of which is the placement of eccentric and odd “road signs” all over the city. As to these colorful signs, he did mind if they were mutilated or stolen.

True Texan in form, Marsh had more than a few run-ins with the law over his brand of enforcement. At one point, it was said that he penned an 18-year old boy with a hammer inside his chicken coop when the boy was caught red-handed with one of his signs.

Throughout the years, the Cadillac Ranch has been repainted many times. In May 2002, the cars were restored to their original colors. In June 2003, the cars were again painted, this time in flat black, in response to the passing of the founding member of the Ant Farm.

Some people today may think the burial of these now much sought-after collector’s items is a sacrilege. But in 1974, these cars were not popular, and most of them were bought from junkyards at an average price of just $200.00. Had they not been used for the ranch “sculpture,” they would have wound up in the metal crusher. 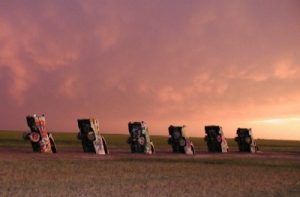 A storm rolls in at Cadillac Ranch by Dave Alexander.

This monument was built as a public sculpture, and visitors are encouraged to participate in it. So, it’s ok if you take your can of Krylon with you, leaving your name or an inspiring message, which will, no doubt, be erased by another message soon. Photographs may be taken at the site; however, any commercial exploitation in advertising or product promotion is expressly prohibited without written permission from the artists. The Cadillac Ranch has appeared on numerous TV shows, magazines, and newspaper accounts. 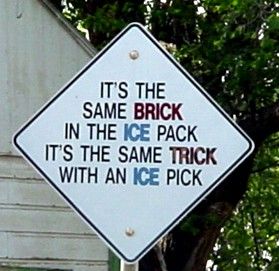 In Amarillo, Texas, there was a driving force behind many of the odd attractions you will see here — Stanley Marsh, 3. Marsh, responsible for building the popular Cadillac Ranch on old Route 66, didn’t stop there with his “artistic endeavors.”

“Art,” Marsh said, “is a legalized form of insanity, and I do it very well.”

Stanley Marsh, 3 made his mark on Amarillo in more than one way. Though the Texas millionaire was eccentric, he was also very down to earth, quickly disregarding the “III” as too pretentious.

From the Cadillac Ranch, Marsh moved onto other endeavors, including a giant phantom pool table that can only be seen from the air to huge sculpted legs south of the city, to a plethora of strange signs posted throughout Amarillo. In any event, it’s an interesting ride!

Northwest of Amarillo, Marsh painted a mesa to look like it’s floating, where hundreds of sheets of plywood were painted sky blue on the side of a tall hill. Unless it’s overcast, the resulting impression is that the summit is floating. The mesa is located about 8 miles northwest of Amarillo via Tascosa Road.

Another oddity was that of the Giant Phantom Soft Pool Table, which few have seen. The pool table sculpture is a 180-by-70 foot rectangle of dyed green grass complete with 42-inch plastic balls. Saying “maintaining good art should not be seen but dreamed about,” he has kept his pool table hidden somewhere on his thousands of acres of family land – seen for the most part only by cows, cowhands, snakes, and low-flying airplanes. “I move it twice a year, on May Day and Halloween, or whenever I feel like it,” Stanley once said. 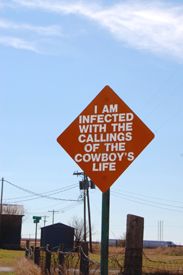 Marsh was also the man behind 200 signs on display at Amarillo homes and businesses. Looking very much like colorful municipal signs, they don’t dispense traffic or parking rules. Instead, they offer a variety of offbeat slogans. One reads, “Strong drink.” “What is a village without village idiots?” asks another. There are dinosaur and ostrich “x-ings” signs that read “Road Does Not End.” There was a sketch of the Mona Lisa with the words: “Men have loved her.” On Monroe Street, a Marilyn Monroe sign.

While the signs are spread out around Amarillo and the surrounding area, Old San Jacinto is the neighborhood where you’ll see them in the highest concentration. The ever-enigmatic Marsh explained the signs, saying, “They are to be looked at.”

“The signs are just there, like the Rock of Gibraltar or the Statue of Liberty. They are a system of unanticipated rewards.” Marsh provided the official-looking diamond-shaped signs to anyone who would put them up on their property. Stanley Marsh, 3, died in June of 2014 at the age of 76.

While Marsh didn’t care if people sprayed graffiti on the cars at the Cadillac Ranch, he wouldn’t tolerate anyone messing with his eccentric signs. True Texan in form, Marsh had more than a few run-ins with the law over his brand of enforcement. At one point, it was said that he pinned an 18-year old boy with a hammer inside his chicken coop when the boy was caught red-handed with one of his signs.

Other eccentricities included a billboard-scale sign on his property that read “Actual Size,” and he created a gargantuan necktie, 40 feet long and 8 feet wide, which he placed around the chimney of his mother’s home. 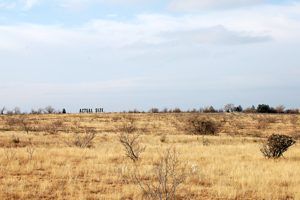 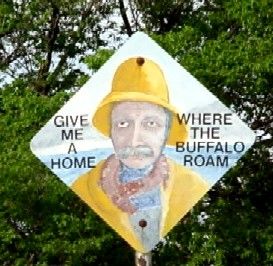