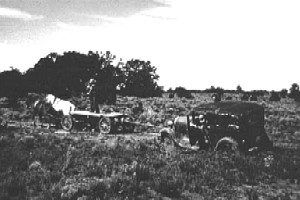 Car stuck in the mud at Jericho Gap.

This was once the first section of the infamous Jericho Gap that, during Route 66‘ heydays, trapped numerous travelers on its 18-mile swath of muddy black soil. Bypassed in the 1930s, the road’s original stretch is now missing segments and is partly on private property.

Locals often benefited from the many stranded vehicles on this stretch of the Mother Road, pulling stranded cars out of the quagmire to such a degree that there were rumors that some locals watered down the road to increase their business.

Beyond Johnson Road (exit 132), old Route 66 continues paved for a while before turning to gravel, turning paved again, and back to gravel for about two miles. At that point, it becomes a rutted dirt road and enters a private ranch. 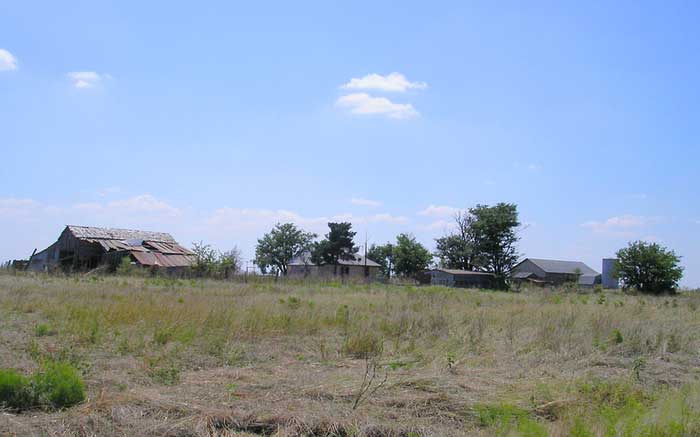 Jericho’s old site can be accessed by taking exit 124 south on Highway 70 about one mile. Here you can see the endings of both the Jericho-Alanreed and Groom-Jericho sections of the Jericho Gap at County Road B. 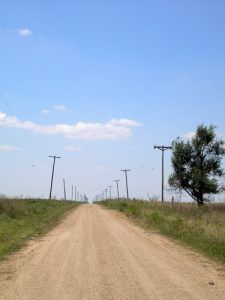 Jericho Gap Road – Locals often benefited from the many stranded vehicles on the infamous stretch of the Mother Road.

The area that would become Jericho was first inhabited when a stage stop was established in the late 1880s along the stage route that carried passengers and mail from Saint’s Roost (modern-day Clarendon) to Fort Elliott (today’s Mobeetie). There was little here when the station was composed of just a dugout, and drinking water had to be hauled in from a nearby spring.

When the Indians were removed to reservations, more people began to settle the area, and in 1894, when an unusual outbreak of Malaria killed several settlers, the Jericho Cemetery was established.

When construction on the Choctaw, Oklahoma, and Texas Railroad began through the area, even more people settled there. The town was officially established in 1902 when the railroad built a station there. A post office was founded that same year, and the town was named for the biblical city in Palestine.

In no time, the small town began to grow as cattle were shipped from here and passengers could take the train to the area. When Route 66 was established through Jericho, it brought several gas stations, stores, and a motel. It was then that the town gained its infamous reputation as the Jericho Gap helped the locals to prosper.

Jericho peaked in the 1930s when it boasted a population of about 100 souls, a post office, three stores, a grain elevator, a tourist court, a service garage, and a filling station.

However, Route 66 was moved one-half mile north, bypassing the town, and by 1939, its population had dropped in half to just 50 people. The post office was discontinued in 1955, and by the 1980s, little remained at the townsite. 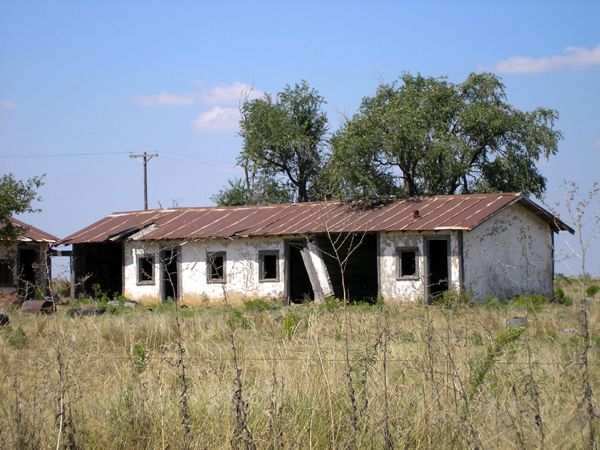 An old lodging facility at Jericho, Texas, by Kathy Weiser-Alexander.

Today, Jericho is a ghost town surrounded by cattle and ghost farms. The ruins of the old tourist court can still be seen, and a house and another unidentified brick building. What little is left is located on County Road B, just west of Highway 70. The cemetery also remains about two miles west of the old townsite, south of County Road B. 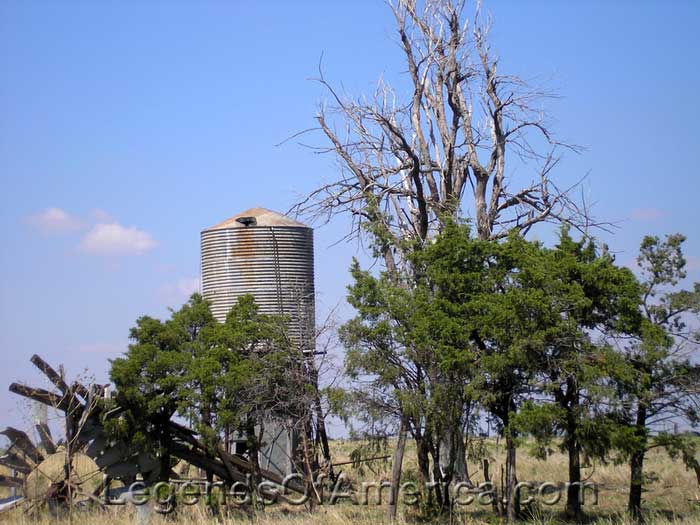 Falling down in Jericho, Tx

To continue along Route 66, return to the frontage road, where you will pass by the Britten Leaning Water Tower to the north before entering Groom, Texas.