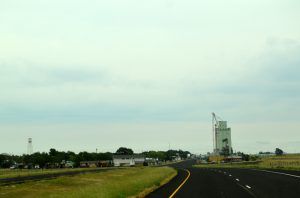 Long before Groom, Texas was ever established as a town, the area was first explored and charted by Captain Randolph Barnes Marcy in 1849 as he traveled from Fort Smith, Arkansas to Santa Fe, New Mexico, along the Canadian River. Ten years later, he would publish his findings, including maps and illustrations in a book entitled The Prairie Traveler: A Handbook for Overland Expeditions.

In 1882, Colonel B. B. Groom, an experienced cattleman from Lexington, Kentucky, leased from the New York and Texas Land Company nearly 600,000 acres of land in Hutchinson, Carson, Gray, and Roberts Counties in the Texas Panhandle and organized the Francklyn Land and Cattle Company. Unfortunately, Groom’s vision of the finest and most desirable cattle ranch in the United States did not materialize for him, and the company went bankrupt just four years later. However, the Colonel would not be forgotten, as, when the site was chosen in 1902 to be a station along the route of the Chicago, Rock Island, and Gulf Railway, it was named for him. 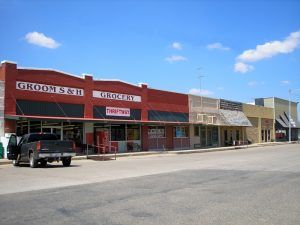 A general store and post office was established in the same year, a mercantile store in 1903. By 1906 the town boasted a barbershop, a bank, a hotel, a lumberyard, a school, and several more new businesses. When the town was incorporated in 1911, it had more than 250 residents. While benefiting from the oil boom of the 1920s and the traffic along Route 66, it never grew beyond much more than 800 people.

The old service stations and the local farmers and ranchers once did a big business pulling stranded cars out of the infamous Jericho Gap, a stretch of muddy road to the east of Groom. And, those travelers not stranded breathed a deep sigh of relief as they entered the small town without having fallen prey to the treacherous piece of road.

Today, Groom’s sleepy little village is home to only about 575 people, and many of its former services that catered to Route 66 travelers have been closed. 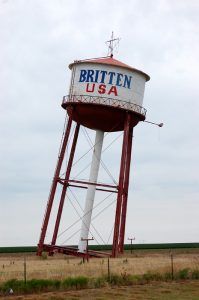 On the east side of Groom at exit #114 of I-40, Route 66 travelers will pass by the old Britten Truck Stop. This once busy stop, which features a leaning water tower, used to have a garage and a restaurant. Though the business is long gone, the tall sign’s vestige remains still stand next to the water tower. Many people have often wondered how this water tower came to stand this way, some thinking that one leg of the tower is shorter than the others. Not true, nor was the tower swept to one side by a raging Texas tornado. Quite simply, it was planned that way, making for a good gimmick and lots of traffic at the Tower Restaurant when travelers stopped to inquire.

The water tower was once a functioning water tower, which was slated for demolition until Ralph Britten bought it and moved it to its current location to draw attention to his truck stop and tourist information center.

After taking advantage of the photo opportunities at “Britten, USA,” travel under I-40 to follow Route 66 into Groom. Travel along this path to Western Street (Ranch Road 295) and turn right (north) to County Road BB, then turn left (west) to see the Groom Cross. 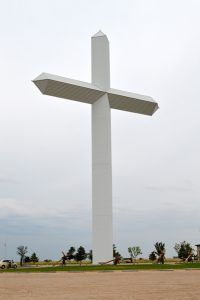 Construction of the cross frame was completed in two shops in Pampa, Texas, by more than 100 welders and erected in July 1995. The freestanding Cross can be seen from 20 miles away. It is surrounded at its base by life-sized statues of the Stations of the Cross. Today, ten million people pass by the cross each year, and about 1,000 of them stop each day for a closer look. The cross is located just west of Groom, south of I-40.

Route 66 follows the south frontage road of I-40, where it joins Texas Highway 207 to Conway, Texas, about 16 miles west of Groom. Highway 207 turns north in Conway, where it joins I-40. Here are several newer Route 66 buildings, including the old Longhorn Trading Post, two closed restaurants, a gas station, and two motels.

However, original Route 66 continues west from Conway’s old townsite, where the grain elevators stand, following FM 2161 for 7.2 miles, before rejoining I-40. This short stretch of highway is listed on the National Register of Historic Places. 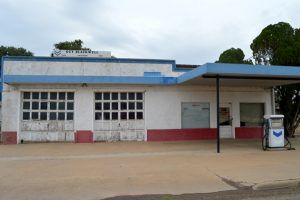