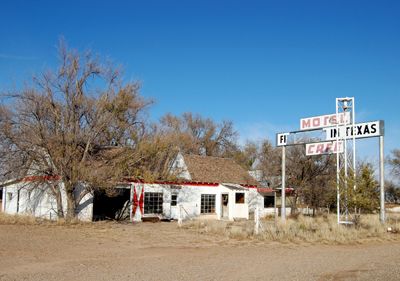 Straddling the border between Texas and New Mexico is the forgotten ghost town of Glenrio. Once a monument along the boom and bust highway of Route 66, it now remains home to only the critters and the blowing tumbleweeds of the vast prairie.

In 1901 the Chicago, Rock Island and Pacific Railroad came through the area and two years later Glenrio was born. The name Glenrio, which stems from the English word “valley” and the Spanish word for river, is neither in a valley or along a river.

In 1905 the region was opened to small farmers, who settled on choice 150-acre plots and a year later the Chicago, Rock Island and Gulf Railway established a station at Glenrio. The settlement began to bustle with cattle and freight shipments. Initially, the area was primarily populated by large cattle ranches but as time passed much of the surrounding land was planted in wheat and sorghum and the farming expansion was responsible for most of the growth of the area population. 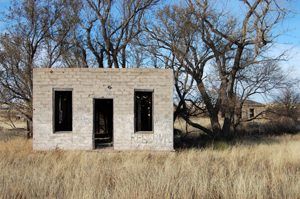 A post office was first established on the New Mexico side of the community, but, the mail arrived at the railroad depot located on the Texas side. Sitting in its precarious location crossing Texas and New Mexico, Glenrio became the subject of a long battle between both states for tax rights.

By 1920, Glenrio had a hotel, a hardware store, and a land office, as well as several grocery stores, service stations, and cafes. A newspaper, the Glenrio Tribune, was published from 1910 to 1934. There were no bars on the Texas side of the community since Deaf Smith County was dry, and no service stations on the New Mexico side because of that state’s higher gasoline tax.

During the prosperity of the 1920s politicians and entrepreneurs decided that America needed a national highway system, and a decade later Route 66 was born. In 1938, just months after the final pavement through Llano Estacado (the Staked Plains) terrain of Route 66 was finished, John Steinbeck’s The Grapes of Wrath was filmed in Glenrio for three weeks.

At the midpoint between Amarillo, Texas and Tucumcari, New Mexico, and 10 miles from the Chicago-LA midpoint of Route 66, Glenrio became a popular stopping place for Route 66 travelers and a “welcome station” station was built near the state line.

Somewhere along the line, a new post office was built on the Texas side of Glenrio. 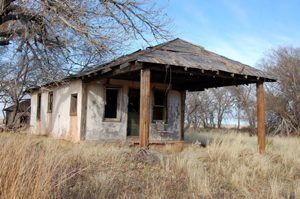 An old business building on the New Mexico side of Glenrio. Photo by Kathy Weiser-Alexander.

In the 1940s, the highway quickly became a supply line for a nation at war. In the post-war boom of the 1950s, Route 66 became “America’s Main Street” as families piled into their chrome-laden two-tone Impalas, traveling to exotic vacation spots like the Grand Canyon and Disneyland.

Though Glenrio’s permanent population never rose over about thirty people, the town survived with its tourist-based businesses catering to the many travelers along Route 66. In 1955, the small town suffered a severe blow when the Rock Island Depot was closed. But, the town was doomed to extinction when Interstate 40 was built, bypassing the small community.

The Ehresman family, who operated a combination grocery store, filling station and tourist shop pulled up roots and moved their business to Endee, New Mexico, five miles to the west. Endee, now too, is an abandoned town. Charles Jones moved his cafe and filling station north to the bypass in Oldham County, Texas.

By 1985 only two residents remained in the small town and the Texas post office was the only business open. It too has long since closed. 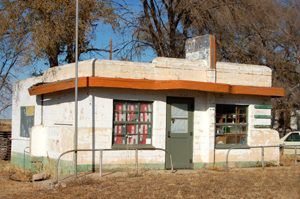 The Little Juarez Cafe in Glenrio. Photo by Kathy Weiser-Alexander.

Today, the town is only visited by those travelers wishing to relive the history of old Route 66. The ghost town remains home to the long-closed Little Juarez Cafe, that looks like a bricked over old Valentine Diner, but, is really just a similar-looking building. The dusty collection of empty buildings also includes the old motel, a gas station, and the post office.

Glenrio’s old main street, which still stands intact, continues on to old Route 66, a dirt road following the old Chicago, Rock Island and Pacific Railroad right of way. Alternatively, you can return to I-40, where you will see an old gas station at the exit to Endee.

Glenrio is located in extreme northwest Deaf Smith County, Texas and along the eastern border of Quay County, New Mexico.

To get to Glenrio, while traveling west along I-40, you will take exit 369 off of I-40 (Endee exit), turn right at the stop, and left onto the north frontage road.

When traveling eastbound on I-40, you can take the Bard Exit 361. Note that the majority of the road from Bard to Glenrio is dirt and gravel.