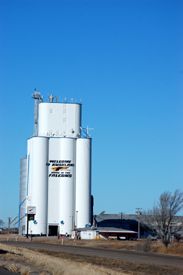 Fourteen miles west of Amarillo is the old settlement of Bushland, Texas, established as a station on the Chicago, Rock Island, and Gulf Railway. Named for Chicago real estate baron, William Henry Bush, who owned the Frying Pan Ranch, Bush donated the land for the townsite and the railroad right-of-way. The townsite was dedicated by Bush and an associate named S. H. Smiser on July 3, 1908, and the settlement was named Bush Stop. In January 1909, the post office opened soon a few farmers and ranchers began to settle there.

A couple of years after its beginning, William Bush’s wife determined that the town’s name did not properly represent the family and soon talked the train station master into repainting the west walls of the depot with the name “Bushland.”

Though Bushland never became the booming farming community that Bush had envisioned, it built a church in 1917 that continues to conduct services today. By the 1920s, the population had grown to approximately 175, and the town supported four businesses and an elementary school. By the 1960s, the town’s population had dropped to about 130, which it continues to maintain.

Few remnants of the old Mother Road can still be spied in this small town.

Wildorado, some 23 miles west of Amarillo on old Route 66, was named for nearby Wildorado Creek in 1900. Located along the old cattle trail from Tascosa to Canyon City, Wildorado was born when the Chicago, Rock Island, and Gulf Railroad marked it as a shipping point on the new line.

The town was first settled by Eugene Binford and John R. Goodman, who was already ranching in the area. When the post office was established in 1904, Goodman became its first postmaster. In 1908, the railroad was completed, and a townsite was laid out. An enterprising man, Goodman soon organized the Wildorado State Bank and built the Wildorado Hotel. The town’s first newspaper, the Wildorado Progress, began publication in 1909.

As the town began to grow, many small ranchers and farmers were attracted to the area. By 1915, Wildorado had telephone connections, a grocer, a general store, a lumber company, a blacksmith, a hardware store, a school, two churches, and a population of 100. 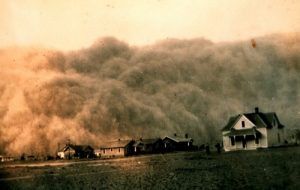 Duststorm in the Texas Panhandle.

During the dust bowl days of the late 1920s and early 1930s, Wildorado suffered along with the rest of the Midwest as crops were ruined by drought, and many a pioneer gave up and headed West to escape the blinding dust storms. Along with numerous refugees from Oklahoma, these desperate folks loaded up their belongings seeking a better life, and headed down the newly founded Route 66.

To make matters worse during this time, the state bank, the grain elevator, and the mercantile store were robbed and burglarized several times by even more desperate men from nearby Borger, Texas. It got so bad that on January 29, 1928, it made national headlines when the Syracuse Herald in New York ran a headline stating: “Wildorado — Texas Town Plundered So Many Times That Six Shooters No Longer Terrorize.” The article continued to say that the Wildorado State Bank “has been robbed eight times in the last three years, and the general store next door has been visited by bandits so frequently that the proprietors have lost count of the number of times they have looked down revolver barrels.”

By 1936, the one-time settlement with a bright future had been reduced to seven businesses and a population of just a little more than 50. However, after World War II, when travel became a popular pastime, Wildorado responded with services along the Mother Road, and its population grew to more than 200 by the late 1950s.

Seemingly doomed, Wildorado suffered another blow when I-40 barreled through town, and all of the businesses on the south side of old Route 66 were destroyed to make way for the superhighway. These businesses included: Wildorado Bank, Rodeo Café, Pop Well’s Station & Café, Dee McDade’s Texaco, Davis Mercantile/Post Office, A.F. Moore’s 66 Dealership, and Tapscott Mobil Station. However, the Royal Inn Motel remained open for travelers until late December 2015, when most original structures burned in an apparent electrical fire. It is one of the last original Route 66 businesses in Wildorado. 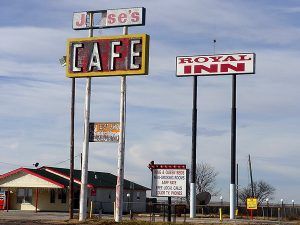 Jesse’s Cafe appears to be fully operational in 2004, photo by Kathy Weiser. 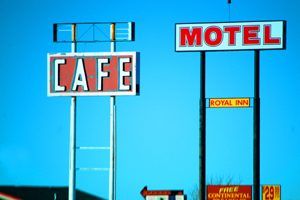 It appears Jesse is gone, and the cafe is no longer operating today. Photo by Kathy Weiser-Alexander, January 2015. 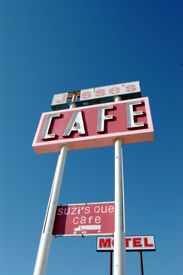 In 2008, Jesse’s Cafe seemed to morph into Suzi’s Que Care, and Jesse is “losing his name.” Photo by Kathy Weiser-Alexander. 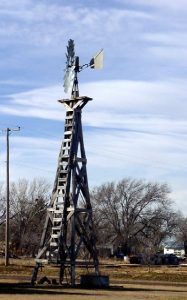 A lonely windmill sits along the Mother Road in Wildorado, Texas, Kathy Weiser-Alexander.

Today the town hangs on as a Feedlot settlement with its accompanying aroma and farm trucks rolling through its old streets. About 180 people continue to live in this town, which still retains some picturesque glimpses of the once busy Route 66.

On Old Route 66, it doesn’t take long for things to change.