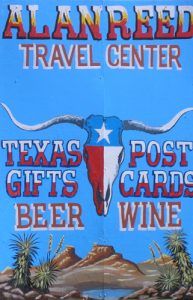 Sign at the Crockett Alanreed Travel Center, by Kathy Weiser-Alexander.

Seven miles west of McLean, Texas, on old Route 66 is the town of Alanreed. When Superhighway I-40 plowed through the Texas Panhandle, Alanreed’s glory days were over. However, it’s well worth the side trip to visit this almost ghost town, envisioning what it must have been like during its heydays as a bright spot on the old Mother Road.

Along the stage line from Mobeetie to Clarendon in the early 1880s, farmers decided it would be a good site for a town. By 1884 the Clarendon Land and Cattle Company began to sell lots, and in 1886 a post office was established in nearby Eldridge, some six miles north of the present site of Alanreed. Those early farmers and cow-punchers must have had a heck of a time figuring out what to call the town because it was also called Springtown, Spring Tank, Prairie Dog Town, Rusty Shanks, and Gouge Eye.

Finally, the present townsite was laid out in 1900 by the Choctaw, Oklahoma, and Texas Railroad surveyors, naming the settlement Alanreed, derived from the contracting firm Alan and Reed. G. E. Castleberry’s Land Company began to sell parcels for $2.25 an acre in no time.

In 1901 the first school was built, and just one year later, the post office was moved from Eldridge and renamed Alanreed. After the Rock Island Railroad was completed in 1903, Alanreed became a major shipping point for cattle, and by 1904 the settlement was the largest town in Gray County. That same year, the Alanreed Baptist Church was founded. It continues to stand and serve congregations today. It is the oldest church on Texas’ stretch of Route 66. 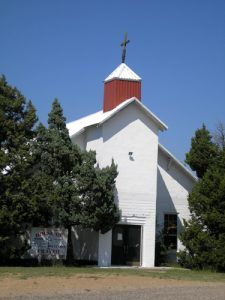 The oldest church on Texas 66 was founded in 1904 by Kathy Weiser-Alexander.

By 1907, the town boasted a bank, a hotel, two churches, a saloon, two grocery stores, a hardware store, a livery stable, and a blacksmith shop. In 1912 a new two-story school was built, and by 1917 the town had a population of 250, complete with telephone service. In 1927 with the Panhandle Oil Boom and the coming of the Mother Road, Alanreed was called home to some 500 residents. Like its neighbor McLean, Alanreed made several unsuccessful bids to be the county seat.

However, even though the oil boom and Route 66 had boosted the population for a short period, by 1929, the hotel and the bank had both closed. In 1930 the Alanreed school was consolidated with three other area schools, and by and by 1933, Alanreed’s population had dropped to just 150.

The number of residents ebbed and flowed over the next several decades, but by 1977 only about sixty residents and no businesses remained. Today, Alanreed is all but a ghost town with about 50 residents and only one operating business. 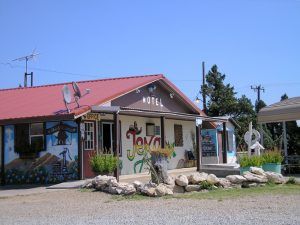 As you approach Alanreed, you will pass by the oldest cemetery on Texas Route 66 to the south. Continuing down the curving road, keep your eye out for the restored gas station on your left-hand side. Maintained by the Texas Historic Route 66 Association, the Bradley Kiser Super “66” Service Station, built in 1930, is a great photo opportunity. Next to the gas station is an unmarked brick automotive garage. Throughout this small community, several abandoned homes and buildings can be seen in various states of disrepair.

A bit further up the road, on your right, is the oldest church on the Texas Route, founded in 1904. Unfortunately, the once-popular Regal Reptile Ranch is gone. As you near I-40, a bit further is the Crockett Service Station and Motel, which also serves as a small trading post and a post office.

Alanreed is located on Old Route 66 at I-40 and FM 291, seven miles west of McLean, Texas, and 59 miles east of Amarillo in Gray County. West of Alanreed, just beyond the I-40 on-ramp, Route 66 continues paved for 2.3 miles arriving at Johnson Ranch Road (exit 132), where you should re-enter I-40. 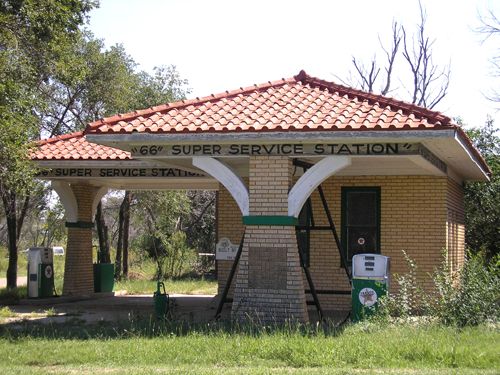