John Colter was an American trapper and guide was born in Augusta County, Virginia about 1774. Sometime around 1780, Colter’s family moved to Kentucky near present-day Maysville. In 1803, Colter enlisted in the Lewis and Clark Expedition as a private with a salary of $5.00 per month. During the expedition, Colter was considered one of the best hunters and scouts in the group and was routinely sent out to hunt game and scout possible trails.

As the expedition returned to St. Louis, Missouri, in 1806, they met two trappers named Forest Hancock and Joseph Dickson, headed to the Yellowstone River. Not ready to return to “civilization,” Colter was granted a discharge to join them, and the trio began the journey in August.

As Colter made his way back to St. Louis the following year, he met Manuel Lisa and his party of trappers of the newly formed Missouri Fur Company.

In October 1807, Lisa sent Colter out to meet with the winter Indian camps, alerting them to the presence of the Missouri Fur Company and their desire to trade. Though his exact route is uncertain, Colter traveled alone with only his rifle and pack, covering an estimated 500 miles. During the winter, with the help of Indian guides, he was thought to have crossed the Wind River Mountains and the Teton Range and was probably the first white man to see Jackson’s Hole and Yellowstone Lake. Arriving back at Fort Raymond in the spring of 1808, he described the thermal wonders of Yellowstone to the rest of the party, and though most were skeptical of his descriptions, Yellowstone soon became known as  “Colter’s Hell.” 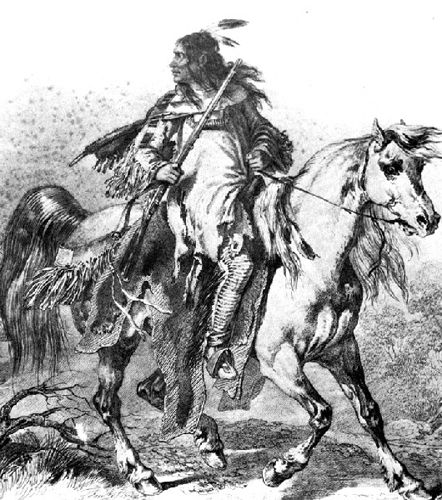 In 1808, Colter teamed up with another former Lewis and Clark Expedition member named John Potts, and the two began to trap in the region near Three Forks, Montana. Both were wounded in a fight with Blackfoot warriors as they led a party of Crow Indians to Fort Raymond. The following year, the Blackfoot attacked the men again, and Potts was killed. Colter was captured and amazed when the Indians set him free. However, before doing so, they stripped him naked and took all his possessions.

Telling Colter to run, the mountain man quickly realized he was the object of a “human hunt.” A very swift runner, Colter eluded most of the group, but one man was gaining on him. Turning and facing the Indian, Colter killed him with his own spear, took his blanket, and was able to escape by hiding in the river under a pile of logs. For the next eleven days, he walked 200 miles back to Fort Raymond with only the blanket for warmth and survived on bark and roots to eat. When he stumbled into the stockade, he was almost dead. However, the brave mountain man was nursed back to health.

Still not ready to give up his life of adventure, Colter signed on to lead another Missouri Fur Company expedition to the Three Forks of the Missouri River in 1810. True to experience, the group was attacked by the Blackfoot again, and Colter finally vowed to return to St. Louis. Returning by the end of 1810, he had been away from civilization for almost six years. He furnished very valuable information to William Clark, who was compiling maps for the Lewis and Clark Expedition report. He bought a farm near New Haven, Missouri, with his fur trade profits. He soon married a woman named Sally, and the couple would have one son. However, his quiet life as a farmer would not last.

In 1812 the United States declared war on Great Britain, and Colter enlisted. Fighting under Nathan Boone, he died while in service for his country. However, after such an eventful life, he died, not by the hand of the British soldiers or the many Indians he encountered in his travels, but by jaundice on May 7, 1812. After his death, his remains were shipped back to Missouri to his wife, who was said to have buried him on a bluff overlooking the Missouri River near New Haven, Missouri.

Editors Note:  It should be mentioned that while several sources indicate he died in May of 1812, others show his death as November 22, 1813. 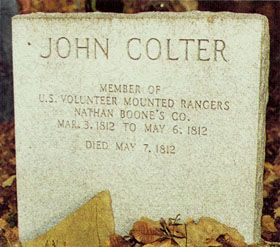