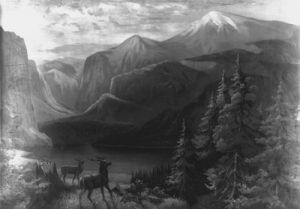 Joseph Dickson, one of the first known mountain men, followed Lewis and Clark up the Missouri River in 1804 along with Forrest Hancock,

Born in Pennsylvania on January 13, 1775, he married an Irish woman named Susan in 1798 and the couple would eventually have nine children. Looking for farmland, he and his wife moved to Tennessee and in 1802, to St. Clair County, Illinois.

Making a living logging and fur trapping, he met Forest Hancock, who had settled in Missouri with Daniel Boone. From Boone, Hancock had learned about the Lewis and Clark Expedition. Dickson and Hancock soon decided to follow the expedition, starting out in August 1804.

The next spring they joined Charles Courtin’s trapping group for protection and spent the winter of 1805 at a camp of Teton Sioux. Before they left in the spring of 1806, they were robbed of their pelts, and Dickson was wounded in a fight. Continuing on, Dickson and Hancock met the returning Lewis and Clark expedition in the summer of 1806. The expedition helped the pair re-supply and John Colter accompanied them upriver to the Yellowstone. Dickson was among the fourth party of white men known to have reached the mouth of the Yellowstone River.

For whatever reasons, Dickson wintered alone in the Yellowstone country, some say over a dispute with Hancock and Colter. During the winter, he suffered a siege of snow-blindness and was sure he would die alone in the wilderness, but after praying for help, he made a poultice from the bark of a tree which restored his sight.

Converted to Christianity thereafter, he determined to return to Illinois and settle down. He took his pelts back to St. Louis and sold them for a profit and was back in Illinois by August 1807. Afterward, he farmed in the summer, trapped locally in the winter, and became a staunch supporter of Methodism.

In 1818, he moved his family into Sangamon County in central Illinois and built the first “white man’s” cabin in the area. Over the next several years, he bought some 240 acres of land. He died at Franklin, Illinois in 1844.