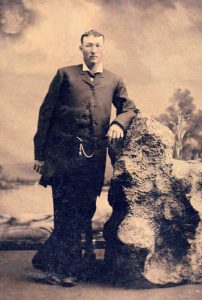 David L. Anderson, more commonly known as William “Billy” Wilson or Buffalo Bill, was an Old West outlaw who rode with Billy the Kid following the Lincoln County War in New Mexico. He also served as a law enforcement officer and a U.S. customs inspector in his later years.

Born in Trumbull County, Ohio, on November 23, 1860, David Lawrence Anderson moved with his family to southern Texas in the early 1870s. When he grew up, he worked as a cowboy before moving to White Oaks, New Mexico, and buying a livery stable in 1880. He sold his operation within less than a year but was paid in counterfeit bills. Duped, he began to pass the money and was arrested and indicted.

Skipping bail, he soon fled and joined Billy the Kid’s Gang of rustlers. From February to May 1880, Anderson stole horses from the Mescalero Apache reservation and cattle from ranchers on the Colorado River, to whom they sold for $10 a head. On November 29, Anderson and Billy the Kid traveled in the open country near White Oaks when a local eight-man posse suddenly pursued them. Both their horses were killed during the chase; however, they could both escape on foot. Later meeting up with Dave Rudabaugh, the three rode into White Oaks the following day and attempted to gun down deputy sheriff James Redman but were forced to flee after a crowd of 30 or 40 local residents took to the streets. He and the others were tracked to a ranch house 40 miles away by a 12-man posse, but they managed to escape. Deputy sheriff Jimmy Carlyle was killed during the shootout, and their pursuers burned the hideout in frustration following their escape.

Following the siege at Stinking Springs (near present-day Taiban, New Mexico), he was arrested with the rest of Billy the Kid’s gang after surrendering to Pat Garrett, convicted in December 1880, and sent to prison in Santa Fe. However, he escaped in 1884, and reverting to his real name, David L. Anderson, he returned to Texas, where he began ranching, married, and started a family in Sanderson.

In 1896, Pat Garrett helped him to obtain a presidential pardon. Afterward, he worked as a U.S. customs inspector before becoming the Terrell County Sheriff in 1905. He was killed in the line of duty in 1918.