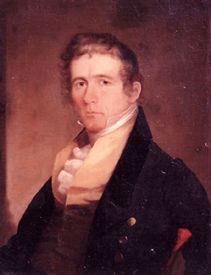 George Champlin Sibley was an American explorer, soldier, Indian agent, and politician who led the 1825 Sibley Survey team of the Santa Fe Trail.

Sibley was born in Great Barrington, Massachusetts, on April 1, 1782, the son of Dr. John and Elizabeth Sibley. Due to his father’s frequent traveling, much of his early childhood was spent living with his Puritan grandfather, Samuel Hopkins, in Rhode Island. Later on, Sibley moved with his mother to Fayetteville, North Carolina, where he received his education and apprenticed as a bookkeeper in the counting-house of John Winslow.

In 1805, through his correspondence with President Thomas Jefferson, Sibley’s father was appointed as an Indian agent for the U.S. government in Natchitoches, Louisiana. George Sibley used his father’s acquaintance with President Jefferson to get a position as an assistant factor (an intermediary agent that finances receivables for commissions at trading posts) at Fort Bellefontaine at the mouth of the Missouri River near St. Louis, Missouri.

Problems arose in 1807 between Sibley and the factor of Fort Bellefontaine, Rudolph Tillier when Sibley questioned Tillier’s bookkeeping methods. Disagreements grew between the two to the point that Tillier fired Sibley. To defend himself, Sibley immediately undertook a trip to Washington, DC, to give his side of the story.

Sibley was cleared of wrongdoing because of his good reputation among friends William Clark and Acting Governor Frederick Bates. Consequently, Sibley was given the position of a factor at Fort Osage in western Missouri, near present-day Kansas City, Missouri, in 1808.

While at Fort Osage, Sibley quickly created relationships with the neighboring Osage tribes. In 1811, he led an expedition, known as the George C. Sibley Expedition, to improve relations with the Pawnee and Kanza tribes and also to locate the rumored Jefferson’s salt mountain. Instead, he found it in the Salt Plains in northwest Oklahoma. He kept several journals of his travels but never published them.

Once the War of 1812 began, Sibley briefly moved back to St. Louis because it was feared that the British would entice the local Native American tribes to attack Fort Osage. This, however, lasted briefly because the Osage tribes complained about having to travel the extra distance to St. Louis for their trade goods. As a result, in 1813, Sibley opened a temporary trading post in Arrow Rock, Missouri, for the duration of the war. 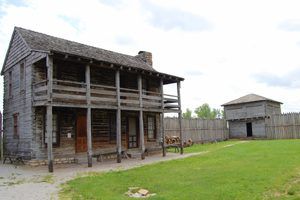 While stationed at Fort Osage, in 1815, Sibley married Mary Easton, the daughter of prominent St. Louis attorney and Missouri’s second attorney general, Rufus Easton. Sibley maintained this post until 1822, when the United States decided to formally end its Indian trade system. By this time, most Native Americans had been resettled outside of Missouri. After the trading post closed in 1822, George and Mary remained at Fort Osage, where he served as postmaster until the fort closed in 1825.

Around this time, trade between the United States and the Mexican government in Santa Fe grew significantly. Consequently, Missouri Senator Thomas Hart Benton presented a petition to Congress to fund a survey of the road to Santa Fe. Congress granted this request, and George Sibley was put in charge of the expedition soon after. Until this time, travelers between Missouri and Santa Fe periodically were raided by Indians along the way, so in addition to surveying the road, Sibley was required to negotiate treaties for safe passage along the route. The tasks for this assignment lasted between 1825 and 1827.

When Sibley finished the survey, he and his wife moved to St. Charles, Missouri, where he had owned land since 1814. Between 1827 and 1829, the Sibleys lived in town until the property that George owned could be cleared and a residence built. During this same time, Mary, who had been recorded as having taught children at Fort Osage, began teaching her sister, along with a few local children, in their home on a private basis. Mary’s career as an educator developed in The Linden Wood School for Girls, later known as Linden Wood College, and today known as Lindenwood University. By 1831, George had built a log cabin on their property and, over the years, expanded the structure as enrollment at the boarding school grew to over 20 women being taught by his wife.

George had a limited role in the school, while Mary served as the school’s headmaster. George helped Mary with the maintenance and additions to the property and cabin and also produced the advertising and most of their correspondence. He also remained active in public life. In 1833, Sibley ran as a Whig for U.S. Congress but pulled out of the race at the last moment. Between 1839 and 1840, he served as president of the Missouri Internal Improvements Board and as a railroad commissioner, and in 1844, he ran for a seat in the Missouri Senate but lost.

Privately, Sibley was very active with the Old School Presbyterian church. Through this involvement, he became closely acquainted with abolitionist Elijah Lovejoy. Lovejoy, whose in-laws lived in St. Charles, visited the region often. On one occasion in 1837, after increasingly irritating area slave owners with his stories in the Alton Observer, an angry mob tried to lynch Lovejoy. Lovejoy escaped to Linden Wood, where Sibley provided him with a horse to get away into Illinois.

After building Lindenwood College’s reputation as a predominant women’s school for its day, the Sibleys decided to retire from education and, in 1853, deeded Lindenwood over to the Presbyterian Church. By this stage in his life, George Sibley was considered an invalid. As a result, he led a quiet life until he died on January 31, 1863. George and Mary Sibley are buried on the campus of Lindenwood University.

George C. Sibley is the namesake of Sibley, Missouri.

Missouri -The Show Me State