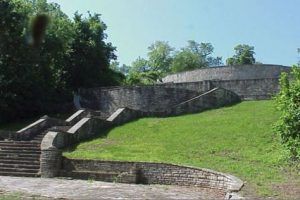 Fort Belle Fontaine, Missouri, was the first United States military installation in Louisiana Territory. This frontier military post was located on the south bank of the Missouri River near its confluence with the Mississippi River. After the Louisiana Purchase, a treaty was made between the United States and the Sac and Fox tribe in November 1804, which allowed the building of a fur trading post of the United States Government. The fort took its name from a nearby spring named “Belle Fontaine,” which means “beautiful fountain” in French.

The trading post served as a starting point for many expeditions to the American West. The site of the fort was Lewis and Clark’s first campsite after they left Camp River Dubois in 1804 and the site of the fort where they spent their last night on their return trip in 1806.

The use of the fort as a trading post was discontinued after 1808, and from 1809 to 1826, it served as a United States Military Fort. Originally called Cantonment Belle Fontaine. Three companies of the First Infantry erected more buildings under the supervision of Lieutenant Colonel Jacob Kingsbury.

The original fort was located on the flood plain below the bluff but was abandoned in 1810 when the river shifted to the South. Today, the original fort’s site would be located in the middle of the river. A second fort was built on the flat ground atop the bluff.

From about 1809 to 1815, the fort served as the headquarters of the Department of Louisiana and was the regional Army headquarters during the War of 1812. Its sister forts were Fort Osage along the Missouri River near present-day Kansas City, which controlled trade with western Indians, and Fort Madison, Iowa, which controlled the trade of the Upper Mississippi River.

By 1825 the post was beginning to deteriorate, and due to the changing military needs of the region, the War Department decided to abandon the location. In 1826, the soldiers were relocated to Jefferson Barracks, the new military post south of St. Louis. However, a small contingent of soldiers was left at the fort to protect the arsenal facility and supply munitions for Jefferson Barracks until the St. Louis Arsenal was completed in 1828. Afterward, Fort Belle Fontaine was permanently abandoned.

By the early 20th Century, a log cabin that was thought to have been soldiers’ quarters continued to stand but is gone today. In the late 1930s, the grounds below the bluff became a popular summer retreat, and in 1936, the Works Progress Administration (WPA) built a grand limestone staircase down from the bluff and several other structures. Today the “Grand Staircase” and other picnic facilities built at the time still stand.

The site was purchased by St. Louis County in 1986 and is now known as the Fort Belle Fontaine Park. The original sites of the Corps campsite and the first Fort Belle Fontaine site have long been destroyed by shifts in the Missouri River channel. However, interpretive markers along a hiking trail designate points of interest. Today, only one small stone structure, possibly made from stone dug up from Foundations of the old fort’s buildings, remains. The park is the site of several annual events, including the Fort Belle Fontaine Historic Encampment and Black Powder Shoot in September. 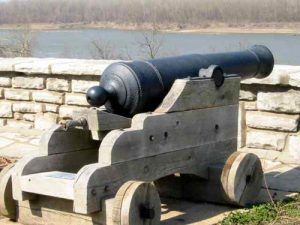