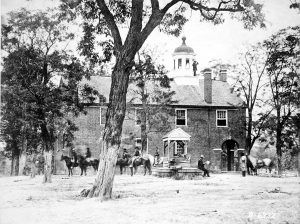 In the woods of Fairfax County, Virginia, a large treasure of valuables is said to be hidden. Worth some $350,000 at the time it was buried, it would be valued at more than $6 million today.

The tale begins with a Confederate partisan Ranger named John S. Mosby, known as the “Grey Ghost” for his lightning-quick raids and ability to elude Union Army pursuers.

Mosby joined the Confederate army as a private at the outbreak of the Civil War, first serving in the Washington Mounted Rifles. In April 1862, the Confederate Congress passed the Partisan Rangers Act, which provided that “such partisan rangers, after being regularly received into service, shall be entitled to the same pay, rations, and quarters, during their term of service, and be subject to the same regulations, as other soldiers.” By the end of the year, after having proved himself as a solid scout and intelligence gatherer under General J.E.B. Stuart, Mosby’s Rangers was formed. 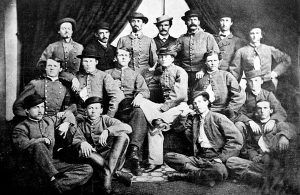 In January 1863, J.E.B. Stuart, with the approval of General Robert E. Lee, authorized Mosby to form and take command of the 43rd Battalion Virginia Cavalry, which officially operated as a unit of the Army of Northern Virginia. However, the men (1,900 of whom served from January 1863 through April 1865) lived outside the norms of regular army cavalrymen. This included sharing in the disposition of spoils of war, having no camp duties, and living among the civilian population. Over time, the vast majority of his men were new recruits, never having served in the Confederate Army previously.

The small cavalry unit was unleashed in central Virginia and immediately began tormenting Union positions. Rather than meeting their enemies in open battle, Mosby’s unit would often slip behind Union lines under cover of darkness and capture soldiers and supplies. A true guerilla force, Mosby and his men were known for carrying out blistering attacks on Union outfits and destroying rail lines and bridges before scattering into the woods and blending with the civilian population.

On March 9, 1863, Mosby conducted a daring raid far inside Union lines near the Fairfax County Courthouse. At 2:00 a.m. on a dark and rainy night, Mosby and 29 men suddenly appeared in the town of Fairfax Court House, Virginia, ten miles behind the Union lines. Though thousands of Union troops were in the surrounding camps and many in the town, the Rangers stealthily slipped past numerous outposts and pickets, cutting telegraph lines along the way.

As the Rangers quietly captured the guards, Mosby made his way to the bedroom of General Edwin H. Stoughton, where the officer was sleeping. Mosby awakened Stoughton with a slap on his bare back and informed him that he was now a prisoner. When Stoughton was dressed, Mosby escorted him out to the street, where the Rangers had gathered 32 other surprised prisoners and 58 horses.

According to legend, it wasn’t only men and horses that Mosby had obtained during the nocturnal raid but also some $350,000 worth of gold, silver, jewelry, and other family heirlooms, that Union troops had taken from Southern homes.

One and one-half hours after arriving at Fairfax Court House, the Rangers, never having fired a shot, rode out of town with their prisoners, horses, and treasure. On the way back, Mosby’s scouts warned him of a large detachment of Union soldiers nearby. In case of a battle, Mosby and a trusted sergeant left the trail as the rest of the detachment moved on. They then buried the sack of treasure between two large pine trees, which Mosby marked with an X. Then, using a roundabout route to confuse any pursuers, Mosby and his men made it safely back to Confederate territory. 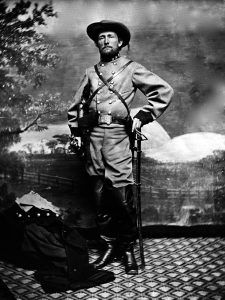 Confederate General Robert E. Lee said of the heist: “Hurrah for Mosby! I wish I had a hundred like him!” On the other hand, when President Abraham Lincoln heard of the raid, he expressed more concern for the loss of the horses than for his general, stating: “I can make brigadier generals, but I can’t make horses.”

Mosby continued to operate with impunity in north-central Virginia until the war’s end when the region became known as “Mosby’s Confederacy.” When Robert E. Lee surrendered in 1865, Mosby disbanded his unit and returned to civilian life. In a startling move, Mosby joined Abraham Lincoln’s Republican party and served in Ulysses S. Grant’s presidential administration as the United States consul to Hong Kong and in the U.S. Department of Justice.

Mosby remained loyal to those he believed fair-minded, such as J.E.B Stewart and Ulysses S. Grant, throughout his life, but refused to cater to Southern sympathies.

He died of complications after throat surgery in a Washington, D.C. hospital on May 30, 1916, and was buried at the Warrenton Cemetery in Warrenton, Virginia.

And what of the treasure? One version of the tale says that he sent his trusted sergeant and several other men back to retrieve the cache, but before they got there, they were caught and hanged by Union soldiers. It is unknown why Mosby never returned, but he allegedly stated on his deathbed that there was a lot of valuable stuff waiting in the Virginia countryside somewhere and he wished he had gotten it.

The treasure is said to be hidden somewhere between Norman and Culpeper, close to present-day Route 522.