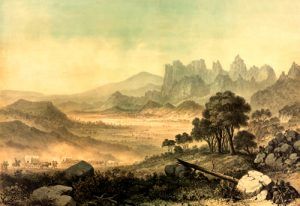 In this beautiful valley occurred one of the most horrific and controversial massacres in U.S. history, drawing by H. Steinegger, Pacific Art Co, 1877.

Though several participants had a hand in the tragedy of the Mountain Meadows Massacre, this list comprises those who were the primary participants and/or assassins from a historical perspective. In actuality, there were more than 50 men who took part in the massacre, none of whom were ever disciplined by the Mormon Church. And of the primary participants, only John D. Lee ever stood trial, which would be 18 years after the tragedy. He was convicted and executed in 1876.

For our article about that tragic day, September 11, 1857, see Mountain Meadows Massacre.

Primary Assassins and their Roles:

Isaac C. Haight – Commander in charge of the Second Battalion in Cedar City, mayor of Cedar City, and Parowan stake president. He ordered the massacre.

Jacob Hamblin – Owned the property where the massacre occurred but was not present. Any involvement is disputed.

John M. Higbee – Major in the Iron County Militia, first counselor to Isaac Haight, and the man who ordered the killing to begin.

Iron County Militia – A branch of the Nauvoo Legion, an estimated 50-100 members of the Iron County group participated in the Mountain Meadows Massacre.

Nephi Johnson – A 2nd lieutenant in Company D of the Iron County Militia, Johnson led the killing of the women and children.

John D. Lee – Prominent leader in the massacre, Lee was the only one punished for the tragedy.

Paiute Indians – Participated in the attack, but Mormon Militiamen killed most pioneers.

George A. Smith – First Counselor in the First Presidency to church president Brigham Young at the time of the Mountain Meadows Massacre, it is not known as to whether Smith had prior knowledge of the attack that took place upon the Fancher-Baker wagon train.

David Tullis – A private in the Iron County Militia, his participation is disputed.

Daniel H. Wells – Commander-in-Chief of the territorial militia, the Nauvoo Legion, is not known as to whether Wells had prior knowledge of the attack at Mountain Meadows.

The following individuals have also been cited in various sources as having been involved in the massacre: 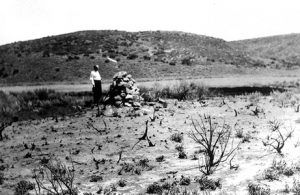 Three more men that cannot be ignored were those at the top of the hierarchy — Brigham Young, governor and prophet, his Counselor, George A. Smith, and General Daniel H. Wells, Commander of the Nauvoo Legion.

Whether they were directly involved, had knowledge of the plans, or were ignorant of the attack until after the fact, ultimate responsibility and accountability resides at the top of the chain of command. At the very least, these men were heavily involved in the cover-up of this atrocity.