In 1884, the Aztec Land and Cattle Company of Boston began operations in Arizona, with its headquarters situated across the Little Colorado River from the site of Saint Joseph (now Joseph City.) The third-largest cattle company in North America, the organization was better known as the Hashknife Outfit because its brand resembled the old hash knives used by chuckwagon cooks.

The following year, the Aztec Company transferred its headquarters to Holbrook, Arizona, and in 1886, they purchased one million acres of former railroad land from the Atlantic and Pacific for 50 cents an acre. The ranch claimed a range that stretched some  650 miles from the New Mexico border to just south of Flagstaff.

The company then bought the Hashknife brand, some 33,000 head of cattle, and 2,000 horses from the Continental Cattle Company in Texas, which was breaking because of drought. When the stock arrived by rail, they were let off the train at stops across northern Arizona. Along with the cattle and the brand also came several original Hashknife cowboys. 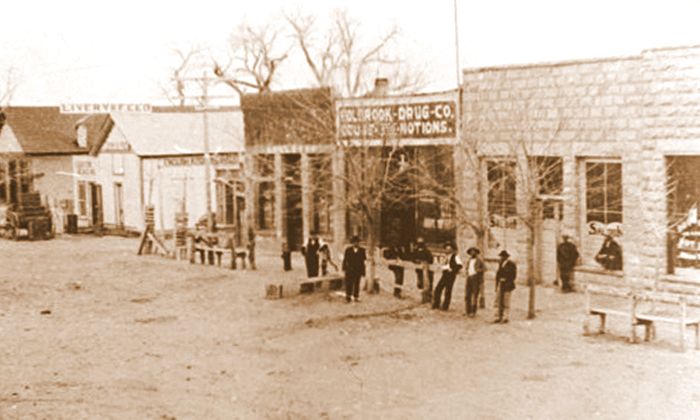 Holbrook initially welcomed the money of the cattle company and its associated cowboys until they saw what they were in for. The Buckaroos of the outfit quickly gained the unsavory reputation of being the “thievinist, fightinest bunch of cowboys” in the United States.  The sudden presence of so many cow punchers also led to rustling, robbery, and gunfights, with much of the cattle thievery perpetrated on the Aztec Cattle Company itself.

Though many said that the Hashknife cowboys were good men, a number of them had reputations for hot-headedness and others were outright outlaws. Some of these crooked cowboys were wanted men, and on two occasions, they were linked to train robberies at Canyon Diablo. Another time, a cowboy took off with a bunch of the outfit’s cattle and headed to Colorado. There, he set up a saloon with his profits. However, he was soon without money again and rejoined the outfit once more.

Stagecoach and train robberies became an almost recreational pastime for cowboys and drifters in the area. And, when the Cowboys came off the range, with money in their pockets and whiskey on their minds, it was time for Holbrook to “look-out!” In 1886 alone, there were twenty-six shooting deaths on the streets of Holbrook, which was called home to only about 250 people at the time.

It was somewhere along this time that the St. Johns Herald reported: “The Salvation Army is going to visit Holbrook. A good field for operation.”

In the meantime, the small ranchers, who had previously settled in the area, resented the takeover of the public lands they had formerly used. One bitter Arizona pioneer wrote: “Thousands of longhorns ate the grass; riffraff and hell-hounds out of Texas ate the rancher’s beef.”

The animosity between the two factions soon resulted in even more cattle rustling against the Aztec Company, and the Hashknife cowboys were quick to utilize their guns to keep small ranchers off their lands.

There was a need for law enforcement in the Holbrook area, and Sheriff Commodore Perry Owens is credited with bringing it to the wild and crusty town in 1887. Within a few years, he and his deputy, Frank Wattron, had rid the country of the worst outlaw gangs. However, while the area towns were relatively peaceful, numerous cattle thieves still plagued the Aztec Ranch. 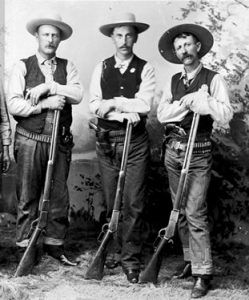 In desperation, the Aztec Company hired Burt Mossman, who would later become the captain of the Arizona Rangers, to manage the outfit in January 1898. Mossman immediately declared war on the cattle rustlers, and in his first official act, he fired 52 of the 84 men on the payroll.

He then put two men in charge of the remaining cowpunchers and went after the cattle rustlers. By the end of the year, he had sent 11 men to the county jail for cattle rustling, helped even more to tame the lawless town of Holbrook, and the Aztec Company was finally beginning to show a profit. On one occasion, as he and a new recruit walked past the Bucket of Blood Saloon in Holbrook, Mossman said to the other man:

“We ain’t had a killin’ in there since last summer. One more’d make it 17. Most of ’em been Hashknife boys or old hands that used to work for the outfit.”

However, it was too late to save the Aztec Company, as the following winter, a severe blizzard hit northern Arizona, killing thousands of Hashknife cattle. The following spring, cattle prices dropped dramatically, and the company ordered outlaw to liquidate its holdings. In 1901, the ranch was sold to the Babbitt brothers of Flagstaff. The Arizona Rangers were formed that same year, and Mossman became their first captain. 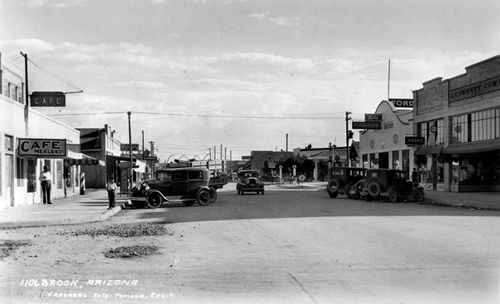 The Salvation Army is going to visit Holbrook. A good field for operation.

Holbrook, Arizona – Too Tough For Women or Churches