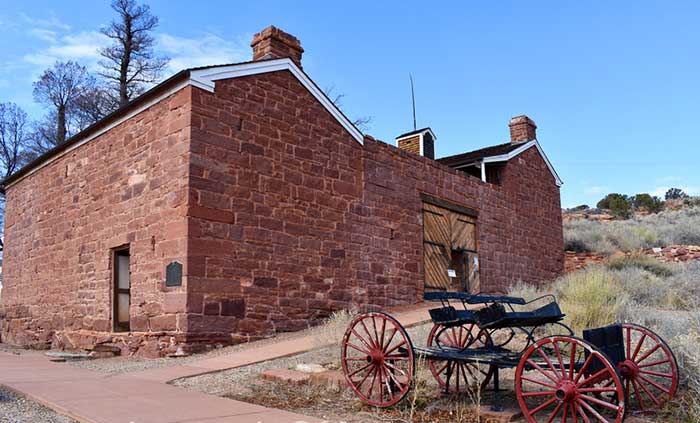 “Its flow is copious and its water is the purest and best throughout that desolate region.” – Clarence E. Dutton, 1882.

Pipe Spring National Monument has a long history of bringing peoples to its life-giving waters. Located in the Arizona Strip, a high desert between the Grand Canyon and the Vermilion Cliffs in the northern part of the state, the region is seemingly uninhabitable.  However, water, held by sandstone aquifers, makes its way south to the base of the Vermilion Cliffs and is forced to the surface in places like Pipe Spring. Evidence shows Ancestral Puebloans here as early as 300 BCE.  The Southern Paiute Native American tribe has called the land home for hundreds of years, and still do to this day.  And it is against this backdrop of desert history that the story of Pipe Spring brings explorers, missionaries, and ultimately conflict. 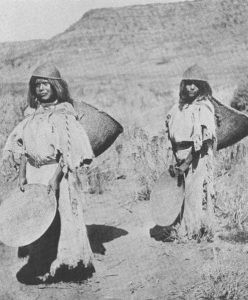 Its thought that the Puebloans left the Arizona Strip due to prolonged drought and concentrated population between the years of 1000 and 1250. However, the Paiute were able to better adapt to the harsh environment, moving seasonally to hunt, but also farming maize and beans. They made nets from hemp to trap rabbits for pelts, tightly woven baskets for harvesting, and many other uses.

The first Europeans to meet the Southern Paiute were Francisco Atanasio Dominguez and Silvestre Vélez de Escalante, Catholic missionaries exploring a route from Santa Fe to California in 1776.  The tribe provided food, water, and directions on how to go around the Grand Canyon.  Although more difficult, a better direct route would be found in 1829 which eventually became the Old Spanish Trail.

Jacob Hamblin, on a mission trip to the Hopi Tribe for the Mormon Church, stopped at Pipe Spring in 1858. It was during this time that church leader Brigham Young had called for the expansion of his flock into Arizona. Mormon ranchers, wanting the utilize the high desert grasses of the region, began settling near water sources on the Arizona Strip in the 1860s. In 1863, rancher James Whitmore acquired 160 acres around Pipe Spring. He would bring sheep and cattle to the land, build a dugout and corrals, and even planted an orchard and vineyard.

Ranchers like Whitmore were a target for nearby raiding Navajo warriors, who in 1864 began raiding Mormom livestock across the Arizona Trip.  Whitmore and his herdsman were killed in 1866 while trying to recover stolen cattle from the Navajo.  By 1868, Navajo raids had resulted in more Mormon deaths, which led to the building of a small stone cabin at Pipe Spring as a stronghold against the raids. 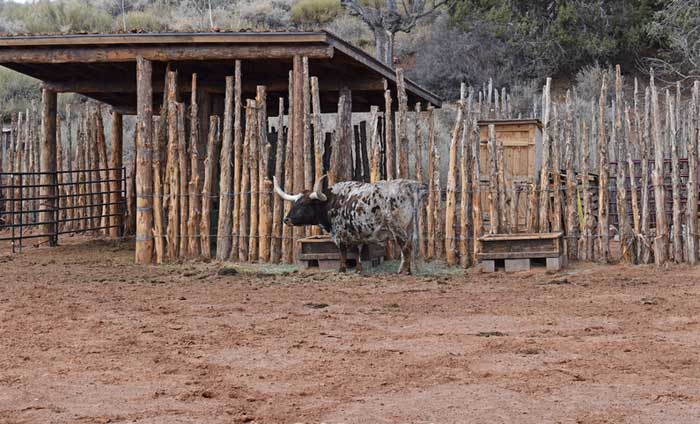 The Mormons and their livestock weren’t the only targets as Navajo and Ute slaving raids were not uncommon.  Frederick Webb Hodge, an editor, anthropologist, archaeologist, and historian, wrote in 1906;

“Among tribes possessing clans, the adoption of captured women was of special importance, as it often resulted in the formation of a new clan from their descendants. Such, no doubt, was the origin of the Zuni and Mexican clans of the Navajo. The Ute clan of the latter was recruited by a systematic capture and purchase of Ute girls undertaken with the object of supplying the tribe with good basket makers.”

Between the raids and diseases brought to the region by Europeans, the population of the Kaibab Paiute tribe suffered and was reduced to around 1,200 by the 1860s.

Brigham Young bought the Pipe Spring claim from Whitmore’s widow as part of his vision for the expansion of the church and appointed Anson Perry Winsor as the first ranch manager. It was in 1870 that Young and Winsor outlined the fortified ranch house, which was nicknamed Winsor Castle.  The ranch house, which covered the main spring, is made of two sandstone block buildings facing a courtyard enclosed by solid wooden gates.  It acted as the Mormom churches Southern Utah Tithing Office and was also the first telegraph office in Arizona Territory, providing better communication between the remote ranch to church headquarters in Salt Lake City. 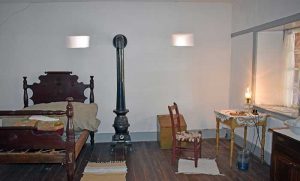 Those in charge of the Telegraph at Pipe Spring Ranch had to stay in this room for long periods of time.

The ranch thrived until drought and overgrazing ruined the range, and support for the 2,200 head of cattle dried up.  By 1879 the Pipe Spring ranch was a smaller version of itself, still acting though as a church ranch and way station.  It also became a hideout for polygamous wives.  Federal laws enacted in 1862, 1882, and 1887 made the practice of having multiple wives illegal. In 1895, faced with the confiscation of church property, the Mormon Church sold Pipe Spring ranch, which remained open to all travelers. Maggie Cox Heaton, a hired girl at the ranch, recalled “I welcomed lots of strangers, and made pies and cakes and bread for ’em… It was a busy place, a real busy place because of the cattle.”

Meanwhile, the Southern Paiute of the region faced starvation and struggles as European expansion and new settlements displaced them from traditional lands, and overgrazing livestock depleted their native foods. Finally, in 1907, the Kaibab Indian Reservation was formed, including 120,000 acres of plateau and desert grassland, a small portion of the tribe’s traditional land. However, Pipe Spring remained a private ranch, surrounded by the reservation.

In the early 1920s, tourists were traveling on buses from Zion National Park to the North Rim of the Grand Canyon. Coming across the Arizona Strip, Steven Mather, the first director of the National Park Service, realized that the old fort and history of Pipe Spring made a great stopping place for weary park visitors, so he proposed adding it to the National Park System.  On May 31, 1923, President Warren G. Harding named Pipe Spring a National Monument.

In 1933, in order to resolve water conflicts, the Secretary of the Interior divided the spring flow evenly among the National Park Service, the Kaibab Paiutes, and private cattlemen. 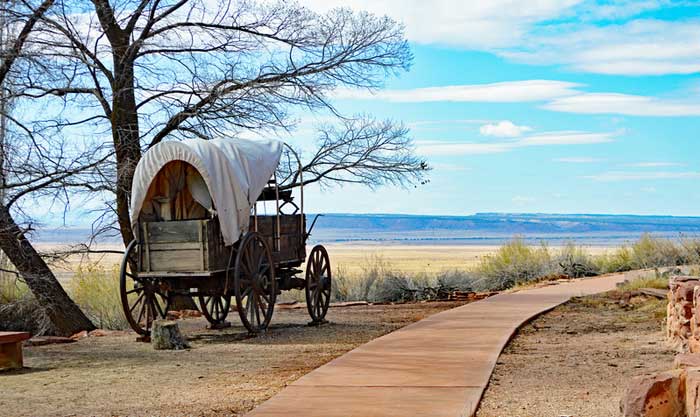 Today, Pipe Spring features a joint Tribal-National Park Service visitor center and museum, which acts as the entrance to the grounds of the National Monument.  Ranger talks and cultural demonstrations are held seasonally and a half-mile Ridge Trail offers dramatic views of the Arizona Strip, Mount Trumbull, Kaibab Plateau, and Kanab Canyon.  In August, tribes compete in dances, songs, and games during Kaibab Paiute Heritage Days.

To get to Pipe Spring, travel 15 miles west of Fredonia, Arizona via AZ 289, or 45 miles east of Hurricane UT, via UT 59. There is a nice Campground for RVers and tents within sight of the National Monument.