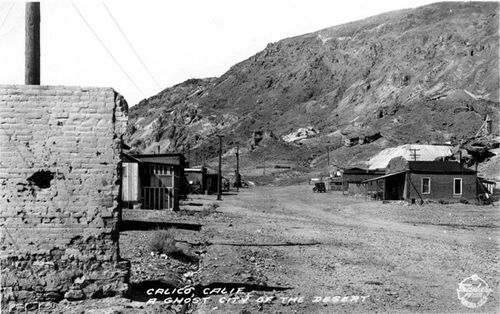 It all began in 1875 when roving prospectors first found silver on the south slope of the Calico Mountains. However, it wasn’t until some five years later that additional ore discoveries worth $400 to $500 per ton brought about a small rush and the filing of many claims.

In the spring of 1881 came the discovery of the Silver King, Calico’s richest mine. Less than a year later, the new settlement supported several businesses on a commercial street flanked by tents and adobe buildings on a narrow mesa between Wall Street Canyon and Odessa Canyon. It took its name from the myriad of colors in the mountains, which are the backdrop for the town.

The weekly Calico Print appeared in October 1882, and a local stamp mill was built to begin working ores.

But in the spring of 1883, many of the local miners left Calico when borax was discovered three miles east at Borate. Later the same year, a fire destroyed much of the camp, but Calico again boomed in 1884 as additional silver discoveries were made. Gaining a population of some 2,500, the town supported two dozen saloons and gambling dives that never closed, as well as more legitimate establishments such as a church, a public school, a dance school, and a literary society, along with dozens of retail businesses.

After 1884 many of the mines consolidated, and late in 1888, the Oro Grande Mining Company erected an even larger stamp mill for $250,000 on the north bank of the Mojave River. Soon it connected the stamp mill, near Daggett, to the Silver King mine by the ten-mile narrow-gauge Calico Railroad.

By the late 1800s, Calico was bustling with prospectors searching for their fortunes, and the Calico Mining District became one of the richest in the state. 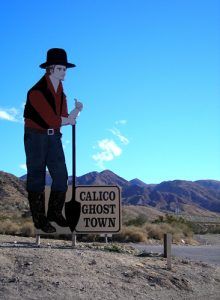 During its heyday, the district would produce $86 million in silver and $45 million in borax. However, when the price of silver dropped from $1.31 an ounce to 63 cents during the mid-1890s, Calico became a ghost of its former self.  The narrow-gauge Calico railroad was dismantled just after the turn of the century, and the town officially died in 1907 with the end of borax mining in the district.

Around 1917 a cyanide plant was built in Calico, recovering values from the Silver King Mine dumps, and the town was revived. However, by 1935, the town was entirely abandoned and left to Mother Nature’s elements in the Mojave Desert.

In 1950 Knott’s Berry Farm in Buena Park bought the townsite and began restorations. Its owner, Walter Knott, spent much time in Calico as a boy, as his uncle lived there. He even helped to build a silver mill in Calico at the time of World War I. Knott’s time spent there, no doubt, influenced his decision to buy the town and restore it.

One of the rebuilt attractions is the one-mile short line “Calico & Odessa” railroad which loops through steep canyons and hills past old mines and buildings north of Calico. Though the original townsite has been mostly rebuilt by new and restored buildings, one-third of the town is original, and the remaining newer buildings were carefully reconstructed to recreate the spirit of Calico’s Old West past. 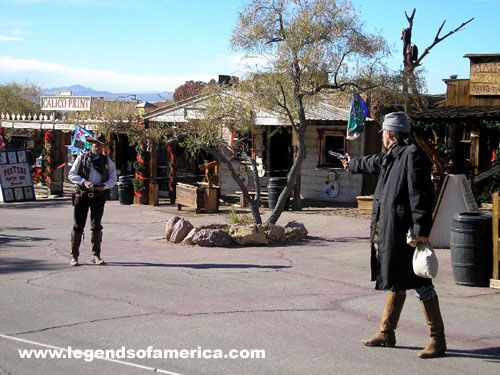 Though Calico is no longer a crumbling ghost town thanks to Walter Knott, it most definitely gives the visitor a feel of what life might have been like during those old mining days. The false front stores and saloons, towered by the craggy mountains above and overlooking the desert valley below, provide an otherwise unobtainable glimpse into Calico’s rich history.

Today, walking tours are available with Calico historians who examine the life of miners during its heyday. The narrow-gauge railroad operates within the town limits, the hard rock silver mine provides underground exploration, buildings such as the schoolhouse, blacksmith shop, and saloons can be explored, as well as a live gold panning operation.

The Calico Townsite is open daily from 8:00 a.m. to dusk, featuring numerous shops, restaurants, and other attractions. In the canyons below the town, a full-service campground, camping cabins, and bunkhouse provide the opportunity for extended stays.

Its reasonable admission price and prices “inside” the town at its restaurants, shops, and additional attractions, make it one of California’s best tourist values. 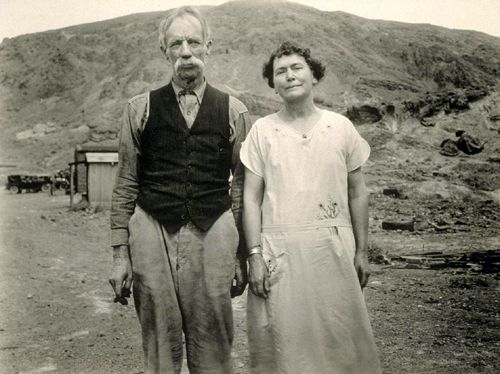 One of the most often sighted spirits is that of Lucy Bell King Lane, a woman who spent nearly seventy years of her life in Calico.

When Lucy was just ten years old, she moved with her parents, two brothers, and a sister to nearby Bismarck, which overlooked the town of Calico. To get to school, Lucy would have to slide down the steep slope in the morning and make the long tiring hike up the hill afterward. When she was 18 years old, she married John Robert Lane, and the two opened a general store that provided not only provisions to the mining population but also cloth, nails, and hardware.

They prospered briefly, but when the silver market began to decline, the couple left Calico in 1899. However, the couple returned in 1916, making their old store their home. Four years later, they moved into the old courthouse and post office building. Her husband John died in 1934, but Lucy would continue to live a long life, staying in the same house until she died in 1967 at the age of 93. 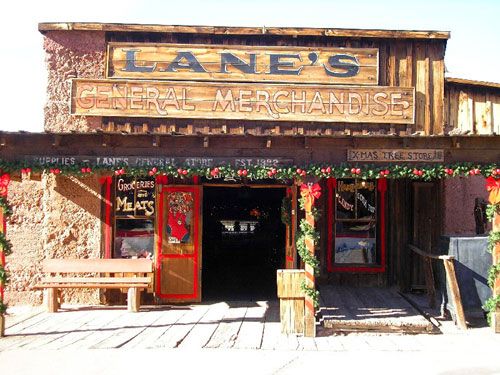 Today, their old home has become a museum that exhibits the life the Lanes lived, as well as a collection of mining materials, photographs, and Native American displays from the times before Calico’s silver deposits were discovered.

Though Lucy died four decades ago, she is evidently fond of her old hometown as she is frequently still sighted there. Most often, she has been seen walking between their old store and the home that she lived in until her death. When she is spied, she is described as wearing a long black dress, most likely the very lace one that she was buried in. Her favorite rocking chair has also been said to rock of its own accord, and often pictures are taken off the wall at night, only to be found the next morning in a neat pile on the floor. At Lane’s old store, clerks have often heard unexplainable noises and catch movement out of the corners of their eyes, which they also attribute to Lucy. The Lane house was the longest-occupied original structure in Calico.

But, favorite resident Lucy Lane is not the only phantom that lurks in Calico. At that very same schoolhouse sitting atop the hill in Calico, some people have reported seeing a little girl about 11 or 12 years, most often smiling through a window. Sometimes she even leans out and waves at passers-by.

Others have allegedly seen phantom school teachers and another small child who has been known to grab people’s legs or pinch their ankles. Some visitors have also reported seeing a floating red light inside the school. 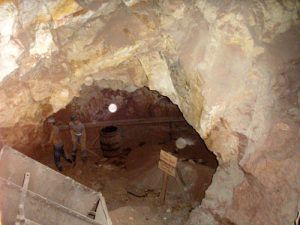 But the most incredible story is one of two British tourists who reported having a long visit with a staff person in period costume, who explained to them that she was the “last teacher’ in Calico. As they were ready to leave, they had pictures taken with the self-proclaimed teacher. The last schoolmistress in Calico was Margaret Olivier, who passed away in 1932 and is buried in the Calico Cemetery. When the couple returned home and got their pictures developed, they were amazed to see that the “staff member” didn’t appear in the photographs. Later, they found that there had been no staff members working at the schoolhouse during their visit.

Though the hills surrounding Calico once held dozens of mines, and the many pits and ruins continue to attest to this, Calico features the Maggie Mine, which once produced some $13 million in silver ore, and now its tunnels can be explored by visitors. In the 1,000 feet of tunnels that are open to the public, it should come as no surprise that many believe that spirits lurk within the mine’s depths.

Several visitors have reported extreme cold spots throughout the mine and feelings of “one’s hair standing up” in various places, but most particularly where two miners known as the Mulcahey Brothers made their home in the mine. Though portions of the mine are blocked off behind grates, macabre mannequins add to the spooky feeling in the mine. 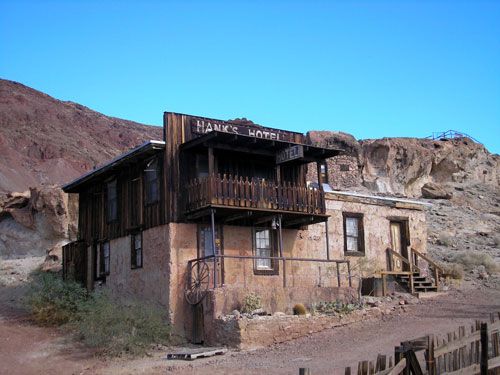 Near the Maggie’s Mine is Hank’s Hotel, which once belonged to an angry old cowboy whose spirit allegedly once punched a man in the leg who was standing on his fence. But more commonly, people have reported something tugging on their wrists, hands, and clothing along the boardwalk in front of the hotel. These antics, however, are not generally blamed on the angry cowboy but rather on a 4-5-year-old child who has been seen roaming the boardwalk and the surrounding area.

Also said to haunt Calico’s boardwalks on Main Street is that of its last marshal, Tumbleweed Harris. Several visitors have described seeing a big man with a white beard which fits the description of the man who kept the peace in Calico for seven years.

At the Calico Corral, some people have often heard the voices of crowds and celebrations coming from the barn that once hosted regular Saturday night dances.  At Lil’s Saloon, one of Calico’s original buildings, sounds of an old-style piano and rowdy crowds have been heard when no one was in the building. Employees have also often reported hearing the jingle of spurs and other noises that can’t be explained.

Another spectral lady in a long white dress has frequently been seen walking near the outskirts of the ghost town and at the building that once housed the town theater, which is now the R&D Fossils & Minerals Shop, another female ghost named Esmeralda, has allegedly has taken up residence. 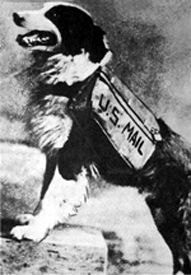 And finally, Calico had another famous resident – that of Dorsey, the “mail carrying dog.” Dorsey was found in 1883 by Postmaster Jim Stacy when the hungry and footsore black and white shepherd was lying on his porch. Stacy quickly adopted him, and Dorsey became his faithful friend. In addition to his postmaster duties, Stacy was interested in a mine in nearby Bismarck.

On one occasion, when Stacy needed to get an urgent message to his partner at the mine, he tied a note to Dorsey’s neck and sent him up there. Before long, Dorsey returned with a reply. Dorsey was soon carrying messages back and forth to the mine frequently when Stacy had the idea to make the dog a regular mail carrier. Soon, the dog was carrying all the mail from Calico to Bismarck, bearing his load in little pouches strapped to his back. For three years, Dorsey covered the mail route between the two camps and became so valuable that Stacy was offered $500 for the dog, to which Stacy replied: “I’d rather sell a grandson.”

Dorsey’s legend was revived in a 1972 album entitled “The Ballad of Calico” by Kenny Rogers. The song was called “Dorsey, the Mail Carrying Dog.” And, of course, in haunted Calico, he has been revived in another way – the “spectral dog.” On several occasions, Dorsey has been seen as a shadow-like apparition at the cemetery and near the Print Shop that stands near the original location of the post office.

Unless you sit on Hank’s fence, it appears that none of the ghosts in Calico are malevolent, so don’t let them stop you from visiting this great old ghost town.