The 1880s brought a different type of newcomer to the Taos Valley when gold and rumors of gold, silver, and copper spread throughout the region. In 1866, gold had been found in Elizabethtown, New Mexico, some 30 miles northeast of Taos and in the 1870s, miners began searching for gold in the Red River area. The fever spread and from 1880 to 1895 the Rio Hondo, which begins high in the Sangre de Cristo Mountains near what is now Taos Ski Valley, was actively searched by placer miners. Mining, however, was not productive in the Taos area.

In 1898, two young artists from the East named Ernest Blumenschein and Bert Phillips discovered the valley after their wagon broke down north of Taos. They decided to stay, captivated by the beauty of the area. As word of their discovery spread throughout the art community, they were joined by other associates. This was the start of Taos’ history and reputation as an artist’s community. 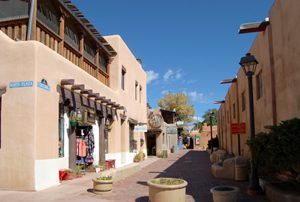 On May 9, 1932, the Taos County Courthouse, along with the other buildings on the north side of the Plaza, was destroyed by one of a series of fires in the early 1930s. This led to the incorporation of the Town of Taos on May 7, 1934, and the establishment of a fire department and public water system. That same year, a new Spanish-Pueblo style courthouse was built with partial funding from the Works Progress Administration. In 1956, the Taos Ski Valley was established, bringing more tourism to the valley. Before long, other area ski resorts also sprang up nearby – Red River, Sipapu, and Angel Fire.

In 1965, the second-highest suspension bridge in the U.S. highway system is built spanning the Rio Grande Gorge. It was called the “bridge to nowhere” while it is being built, because the funding did not exist to continue the road on the other side. However, its magnificence can be seen today along US Highway 64, heading northward to Colorado.

During the 1960s and 1970s, Taos became known for being a Hippie community. The city was the perfect place for the 1960s counterculture to express itself, as Taos had long been accustomed to blending cultures. Taos, as well as the rest of New Mexico, has long been known as an arty and spiritual place. By 1969 there were at least six communes in the Taos area and some say as many as 25. One of the communes’ leaders took to the stage at the Woodstock festival in 1969, inviting all to his commune and beautiful Taos — and the came. Although the commune era peaked in the early 1970s, many “old” hippies have gradually become part of the Taos community and their sensibilities remain in today.

Unfortunately, on July 4, 2003, the Taos area suffered a fire in the nearby mountains that were ignited by lightning. Called the Encebado Fire, it was within a mile of the historic Taos Pueblo buildings. It took more than a thousand firefighters 13 days to contain the 5,400-acre blaze. Fortunately, there was no loss of life or structures but the Rio Pueblo watershed and the sacred pueblo land will take a generation to recover. 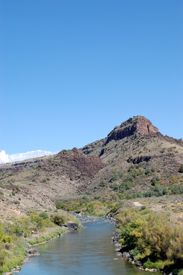 Only two miles to the northeast of Taos, under the shadows of great mountains and occupying both sides of Red Willow Creek, is the pueblo of Taos, with its great terraced buildings, presenting one of the most primitive illustrations of Indian architecture. It has been occupied for nearly a millennium by the Tiwa Indians, who occupy a fertile tract of 17,000 acres, a grant from the Spanish government. It was originally much larger, but for protection against the Comanche, Kiowa, Cheyenne, and Ute, who formerly caused them great annoyance, they gave the east part of their grant to Mexican settlers, with the understanding that the latter would assist them in repelling invasions from Taos Canyon. It is the most northern of the New Mexico pueblos, which at some places is five stories high, and is a combination of many individual homes with common walls. There are over 1,900 people in the Taos Pueblo community, though many of them have modern homes nearby. There are about 150 people who live at the pueblo year-around. The Taos Pueblo was added as an UNESCO World Heritage Site in 1992.

Ranchos de Taos is located about four miles southwest of Taos, is in the center of fertile agricultural and fruit lands, and once had several flour mills, schools, and missions.

Taos is now a community overflowing with a long proud history that features numerous historic buildings, arts and culture, recreational opportunities, and about 5900 people. 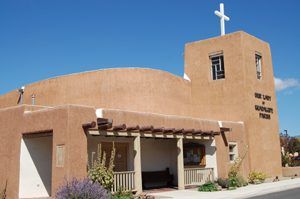 Our Lady of Guadalupe Church in Taos, New Mexico by Kathy Weiser-Alexander.