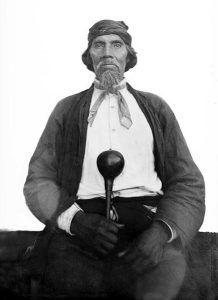 The Old Ones say that at one time all of Creation spoke the same language. The plants could communicate with the finned ones, the four-leggeds could speak with the trees, the stones could talk with the wind, and even the most dependent, most pitiful part of creation, the two-leggeds, or as we have come to call ourselves, the humans, could also speak with the other parts of creation. All existed in harmony. The plants, the animals, and the elements of the Four Directions (all existence) all knew that if the two leggeds were to survive, they would need help.

The animals gave of themselves, willingly sacrificing so that the humans could have food. They knew that their skins were much better suited to survival than that of the humans, so they allowed their skins to be taken and used for clothing and shelter. The Finned ones, The Fliers, and the Crawlers also allowed themselves to be used by the humans, to ensure their survival.

The Plant people, the Standing people (trees), and the Stone People (rocks) freely gave of themselves so that the humans had what they needed for food, clothing, and shelter. An agreement was forged that the two leggeds would ask permission for these gifts, give thanks for the sacrifice, and take no more than they needed. And so, it was good.

But then, the two-leggeds started growing in numbers and began to feel themselves more important than the rest of creation. They began to believe that the Web of Life revolved around them, ignoring the fact that they were just one small part of the Circle. The two leggeds began to kill without asking for permission. They began to take more than they needed. They ceased to give thanks. All parts of the agreement were broken.

The great Animal Councils banded together to determine what they should do to right these wrongs. They needed to protect themselves from destruction and eradication. And so, it was decreed by the council, if one of their clan was killed by the two leggeds and thanks was not given for the sacrifice, the Chief Animal Spirit would afflict the disrespectful killer with a devastating disease.

The plants were distressed and said to the animals, “They wrong us, too. They dig us up, trample us, burn us out, and don’t even listen when we try to tell them what we can do to help them. Yet, we feel compassion for the two leggeds. Man struggles to realize his place in the web of creation and he cannot learn if he is wiped out by disease. Man needs our help, so for every disease you animals bring to them, we, the Plant People will give them a cure. All the two leggeds have to do is ‘ listen’ when we talk to them.”

The Circle of Medicine

1500 AD  – That prayer is superstition. Here, drink this potion.

1985 AD  – That pill is ineffective. Here, take this antibiotic.

The above is courtesy of Nuwati Herbals

Like numerous other Native American tribes, the knowledge of Cherokee medicine was handed down from generation to generation to the “chosen” healers. Traditional Cherokee members consulted their medicine people for not only medical problems, but also dilemmas in their lives, and emotional problems. Like other Native American tribes, their most frequently used remedies were for common colds, aches, and pains.

Some common herbs used by the Cherokee as well as other Native American tribes were boneset tea, as a remedy for colds, while wild cherry bark was used for coughs, sore throat, and diarrhea. To ease the pain during childbirth and speed the delivery process, Blue Cohosh root was used in a tea. Using Wild Carrot Blossoms and Devil’s Club could offset the ill effects of Diabetes. Fevers were soothed with teas made from Dogwood, Feverwort, and Willow bark. A still famously enjoyed Pennyroyal tea was thought to cure headaches, and they used Native Hemlock to help with the flu.

Some serious surgeries that required sedatives would usually be prepared with Wild Lettuce, Hops, and Wild Black Cherry. Heart and circulatory problems were addressed using Green Hellebore, American Hemp, and Dogbane. Many of these Native American remedies were the basis for the modern medicines that are commonly used today such as penicillin.

** Note: The information above is courtesy of the Cherokee Nation Cultural Resource Center who cautions that it must be remembered that these plants are very valuable as medicines because of the great chemical powers they contain. At the same time, these chemicals can be potentially dangerous if used in the wrong way. Cherokee herbalists have great experience, and have gone through extensive training and observation.

Cherokee – Westward on the Trail of Tears

All plants are our brothers and sisters.

They talk to us and if we listen, we can hear them.