The acquisition of horses by the plains Indians in the early 18th century transformed the lives of most tribes between the Rockies and the Mississippi. Almost overnight they found a much more effective way of hunting the buffalo, the main staple of life in this huge area. They embraced the horseback riding culture enthusiastically. With a good horse under him, a hunter could go faster than a buffalo which gave him an enormous advantage.

Since the buffalo herds moved seasonally great distances from place to place those who depended on them for their living must move also. The horse made this far easier and quicker. I know of few situations in history where the economy and culture of a society have been so dramatically transformed with such lightning speed by a similar empowerment. The romance and excitement of this colorful culture has captured the imagination of the Western World and it has become a favorite subject for books, paintings and movies.

The Indian acquisition of the horse reminds me of the somewhat analogous technological revolution in our society caused by the invention and ubiquitous spread of motor vehicles. The glory days of Indian horsemen lasted a little over a century. Given our rapid exhaustion of oil and gas reserves and our pollution of the environment, one wonders if the glory days of the motor vehicle will last much longer than that of the mounted Indian.

It is a strange quirk of fate that equines originated in North America, but became extinct here though they continued to thrive in Asia after crossing the Bering Straits. It is interesting to speculate as to how different history would have been if the horse had stayed in North America and the enormous advantage to civilization had developed first on this side of the ocean. However that may be, it appears that few horses got into Indian hands before the revolt against the Spanish in New Mexico in 1680. In his wonderful book, American Colonies, Taylor says that this revolt was the greatest setback inflicted by natives on European expansion in North America. Thereafter horses and equine culture spread quickly northward across the whole Great Plains area far into Canada.

One must remember that before the early 1700s the Plains Indian depended on dogs or human beings for transporting their equipment. The vast herds of buffalo were extremely difficult for them to hunt because they could move much faster than a man on foot. On the vast plains there was little cover where hunters could hide to make a stalk. Certainly, resourceful hunters managed to kill buffalo with techniques like approaching using wolf hides as cover or driving herds over a precipice, but this did not provide great abundance with any continuity. Almost overnight, as if by magic, they found a way to outrun a buffalo and carry much greater loads farther and faster than a dog or a human. 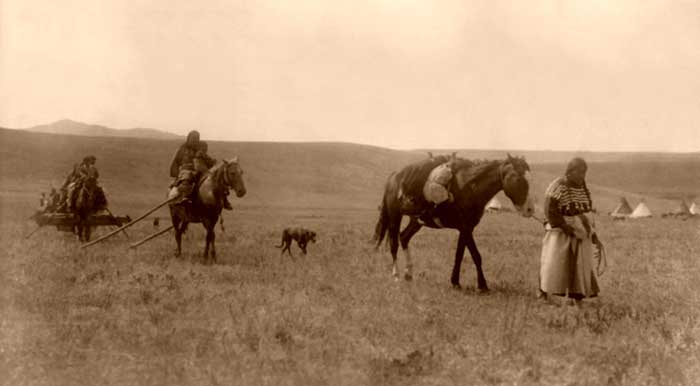 As in European societies, the horse was sometimes a mixed blessing since it could be used for military purposes. It made lightning raids on enemy villages at considerable distances possible and the theft of horses caused endless animosities. Hunting rights to particular areas ignited fierce warfare. Around tribal centers game tended to become less plentiful and sought refuge in the no man’s land between rivals which caused frequent clashes between hunting parties.

Tragically, the glory days of mounted warriors lasted little more than a century, a tiny fraction of the more than 10,000-year history of Indians here. With the decimation of the buffalo herds, military defeat and white settlement, the picturesque culture of these proud, nomadic hunter/warriors was shattered and is only a memory today. One can understand that these people have had trouble adapting to the humdrum existence of sedentary life on a reservation.

About the Author:  Bayard Fox has been riding for 70 years on six continents and has ridden enough miles to circle the globe several times. He is the founder of Equitours Worldwide Horseback Riding Vacations. He and his wife also own the Bitterroot Dude Ranch where they raise and train Arabian horses. Bayard has been leading and organizing riding tours for 35 years.