Bruinsburg Road – On April 30, 1863, the Confederate brigades of Brigadier Generals Martin Green and Edward Tracy marched south along the Bruinsburg Road to contest the Union invasion of Mississippi. The next day, May 1, the brigades of Brigadier General William Baldwin and Cololnel Francis Cockrell hastened out the Bruinsburg Road to reinforce the Confederate troops then heavily engaged with Grant’s forces. Late in the afternoon of May 1, Baldwin’s men would retire from the field along the road into Port Gibson followed by the victorious Union soldiers. Confederate troops were deployed to block both the Rodney and Bruinsburg Roads west of Port Gibson. At the point of deployment, an interval of 2,000 yards separated the roads. The brigades of Tracy, on the right, and Green, on the left, were separated by a deep cane-choked ravine which prevented one flank from reinforcing the other flank. To do so, the Confederates had to march back to the road junction. The “Y” intersection of the roads was thus the lateral avenue of movement for the Confederates.

Portions of the old Bruinsburg Road are part of MS Highway 552 today.

Magnolia Church – On April 30, 1863, Brig. Gen. Martin E. Green deployed his brigade along the Rodney Road just east of Magnolia Church. His thin line of four small regiments was strengthened by four guns of the Pettus Flying Artillery. At 5:30 a.m., May 1st, the Federals advanced in overwhelming numbers along the Rodney Road toward Green’s position. It was not long before his line was hard pressed and the artillery unit supporting him out of ammunition. Green was reinforced shortly after 8 o’clock by two guns of the Botetourt (Virginia) Artillery and the 23d Alabama Infantry. Even so, he could not stem the Federal advance. At 10:00 a.m. the blue line surged forward, captured the guns of the Virginia battery, and drove the Confederates from their position.

As Green’s men scrambled to the rear, the brigades of Brig. Gen. William E. Baldwin and Col. Francis M. Cockrell arrived and established a new line between White and Irwin branches of Willow Creek. Here the battle was renewed at mid-afternoon. The Confederates fought tenaciously but were no match for the powerful Union battle lines which came on relentlessly. At 5:30 p.m. Bowen telegraphed his superiors in Jackson, “I am falling back across Bayou Pierre. The men did nobly, holding out the whole day against overwhelming odds.”

The church was situated about four miles southwest of Port Gibson on Rodney Road. Today, only its brick foundation and the cistern remain, but, a historic marker designates the site. 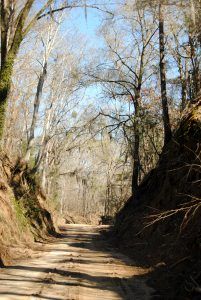 Rodney Road – Much of the Rodney Road has changed little since the days of the Civil War. Imagine soldiers marching down this road, tightly packed in columns of four, the stillness of the night broken by the sounds of their marching feet, clanking accouterments, and the rumbling of wagons and artillery pieces. Prior to the Battle of Port Gibson, it was a clear, moonlit night, and tension and fear were in the air, for these soldiers knew they were on enemy soil and that enemy was near, but where? As they marched along in the late-night hours many of the soldiers dozed. One bluecoat recalled the night march as being “romantic in the extreme.” 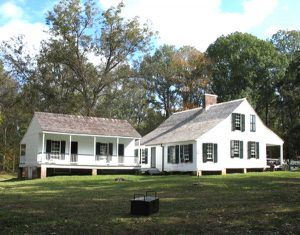 Shaifer House – Built in the late 1820s by Abram Keller Shaifer, Sr. and his wife, Elizabeth Hannah Humphreys Shaifer. Abram was away from home, in service to the Confederate army, at the time of the Battle of Port Gibson on May 1, 1863. The opening shots of the skirmish occurred here. Shortly after midnight the Federal vanguard forded Widows Creek and climbed the long grade to the Shaifer house. As they neared the house, a shot rang out. Union troops responded with a volley of musketry. The battle of Port Gibson had begun. In the darkness the battle increased in fury; then suddenly, about 3 a.m., the guns fell silent. The fighting resumed about 5:30 a.m. as the Federals advanced toward Magnolia Church. One division was sent along a connecting plantation road toward the Bruinsburg Road. Throughout the morning hours, the battle raged near the Shaifer house. Federal troops continued to pass by the house all afternoon and bivouacked in the yard that night. When the battle was over, the house was used as a surgical hospital for wounded soldiers.

The Shaifer family donated the house and grounds to the state in the late 1970s, and the property was transferred to the Mississippi Department of Archives and History in 1999. It was restored in 2006.

Windsor Ruins Loop – This 32-mile long loop off the Natchez Trace, passing through Alcorn and Port Gibson, Mississippi, provides a number of interesting stops. The loop is comprised of 20 miles along Mississippi Highway 552/Rodney Road, seven miles along the Natchez Trace Parkway from milepost 30 to 37 and five miles through the town of Port Gibson and back to the Trace. The Driving/biking route provides views of Alcorn University, the oldest public historically black land-grant institution in the United States and the second oldest state-supported institution of higher learning in Mississippi; Canemount Plantation, Bethel Church and more. A side trip off this loop will take you to the ghost town of Rodney, which at one time was so important it almost became the capital of Mississippi. 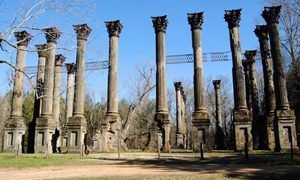 Windsor Ruins – Sitting like a lonely “Stonehenge” about ten miles southwest of Port Gibson, near the Mississippi River, Windsor Ruins has an interesting history, and, perhaps, a few legends as well. Legend says that from a roof observatory, Mark Twain watched the Mississippi River in the distance. Leading up to the Battle of Port Gibson in the spring of 1863, Confederate troops used the roof observatory as a lookout as General Ulysses S. Grant’s army crossed the Mississippi River. After the battle, the mansion was used as a Union hospital and observation post, thus sparing it from being burned by Union troops. However, years later it burned to the ground, leaving behind only its 45-foot elaborate pillars.

Wintergreen Cemetery – Established in 1807, Wintergreen Cemetery is the final resting place for the majority of soldiers killed in the Battle of Port Gibson. Shortly after the conflict, the townspeople removed the Confederate dead from the battlefield and interred them here in Soldiers’ Row. Small footstones marked C.S.A. were placed by the United Daughters of the Confederacy. These small footstones are still in place. 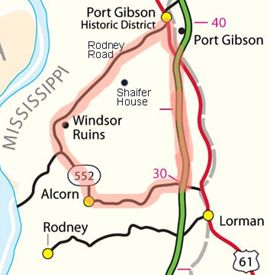 In 1985 an effort was initiated by Roger B. Hansen of Pascagoula, Mississippi, to identify the Confederates buried in Wintergreen. The year-long project resulted in the only documented listing of these Battle of Port Gibson dead. The list was used to acquire headstones from the Department of Veteran Affairs, and these were erected in 1986.

Confederate Generals Earl Van Dorn and Benjamin Grubb Humphreys are also interred in Wintergreen Cemetery, but not in Soldiers’ Row. Confederate Major General Earl Van Dorn was born near Port Gibson on September 17, 1820. Graduating from the United States Military Academy at West Point in 1842, Van Dorn saw service in the Indian campaigns, served with gallantry in the war with Mexico, and attained the rank of major in the 2d U.S. Cavalry before the outbreak of the Civil War.

Commissioned a brigadier general in the Confederate service in June 1861, and a major general three months later, he commanded the Army of the West in the Battle of Pea Ridge. Although defeated, he remained in high esteem, and later commanded the Army of Mississippi at the Battle of Corinth. Again defeated, he was removed as army commander and placed in charge of Confederate cavalry operating in Mississippi. In this capacity he enjoyed much success, with the crowning achievement of his military career coming in December 1862 when his command destroyed General Grant’s Union supply base at Holly Springs, Mississippi, temporarily halting the Federal overland campaign against Vicksburg. 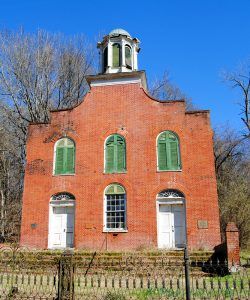 On May 7, 1863, Earl Van Dorn was shot and killed in Spring Hill, Tennessee by Dr. James B. Peters for what the doctor claimed was the violation of the “sanctity of his home.”

Photo Journal of the Area