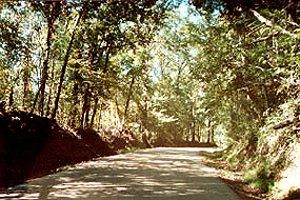 Most of the Union forces moved along the Rodney Road toward Magnolia Church and the Confederate line held by Brigadier General Martin E. Green’s Brigade. Heavily outnumbered and hard-pressed, the Confederates gave way shortly after 10:00 a.m. The men in gray fell back a mile and a half. Here, the soldiers of Brigadier General William E. Baldwin’s and Colonel Francis M. Cockrell’s brigades, recent arrivals on the field, established a new line between the White and Irwin branches of Willow Creek. Full of fight, these men re-established the Confederate left flank.

The morning hours witnessed Green’s Brigade driven from its position by the principle Federal attack. Brigadier General Edward D. Tracy’s Alabama Brigade, astride the Bruinsburg Road, also experienced hard fighting. Although Tracy was killed early in the action, his brigade managed to hold its tenuous line.

It was clear, however, that unless the Confederates received heavy reinforcements, they would lose the day. Brigadier General John S. Bowen, Confederate commander on the field, wired his superiors: “We have been engaged in a furious battle ever since daylight; losses very heavy. The men act nobly, but the odds are overpowering.” Early afternoon found the Alabamans slowly giving ground. Green’s weary soldiers, having been regrouped, arrived to bolster the line on the Bruinsburg Road.

Even so, by late in the afternoon, the Federals had advanced all along the line in superior numbers. As Union pressure built, Cockrell’s Missourians unleashed a vicious counterattack near the Rodney Road and began to roll up the blue line. The 6th Missouri also counterattacked, hitting the Federals near the Bruinsburg Road. All this was to no avail, for the odds against them were too great. The Confederates were checked and driven back, the day lost. At 5:30 p.m., the battle-weary Confederates began to retire from the hard-fought field.

The battle of Port Gibson cost Grant 131 killed, 719 wounded, and 25 missing out of 23,000 men engaged. This victory not only secured his position on Mississippi soil but enabled him to launch his campaign deeper into the interior of the state. Union victory at Port Gibson forced the Confederate evacuation of Grand Gulf and would ultimately result in the fall of Vicksburg. 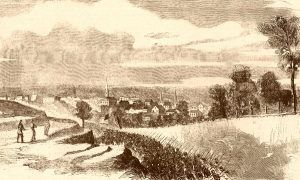 After the battle, Brigadier General John A. Logan’s troops entered the town of Port Gibson, Mississippi.

The Confederates suffered 60 killed, 340 wounded, and 387 missing out of 8,000 men engaged. In addition, 4 guns of the Botetourt (Virginia) Artillery were lost. The action at Port Gibson underscored the Confederate inability to defend the line of the Mississippi River and to respond to amphibious operations. Confederate soldiers from these operations are buried at Wintergreen Cemetery in Port Gibson.

Now firmly established below Vicksburg, Grant would continue to take north, taking Raymond on May 12th and the capitol of Jackson on May 14th. From there, the Union troops turned west again, winning the battles of Champion Hill on May 16th and the Battle of the Big Black River Bridge the next day. On May 18, 1863, the Siege of Vicksburg would begin, Lasting for nearly six weeks, the prolonged battle would become a major turning point in the Civil War giving control of the Mississippi River to the Union and foreshadowing the fall of the South. 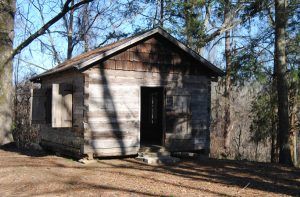 Bayou Pierre Presbyterian Church – Following the arrival of Presbyterian missionaries in 1801, Joseph Bullen and James Smylie organized the Bayou Pierre Church at this site in 1807. After part of the congregation formed the Bethel Church to the southwest in 1824, the remaining members moved to Port Gibson. A reconstruction of this crude log church stands on the site today.

During the Battle of Port Gibson, fought on May 1, 1863, the 20th Alabama Infantry was posted here, anchoring the right flank of Confederate Brigadier General Edward D. Tracy’s Brigade. The thin gray line ran southeastward for 1,000 yards, paralleling the Bruinsburg Road. Shortly after 8 a.m., the Confederate skirmishers began to fall back and the mainline opened fire.

It was at this time, recalled Sargeant Francis Obenchain of the Botetourt (Virginia) Artillery, that while speaking with General Tracy, “a ball struck him on back of the neck passing through. He fell with great force on his face and in falling cried `O Lord!’ He was dead when I stooped to him.” Edward Tracy was the first of several Confederate generals to die in defense of Vicksburg. Even so, the Confederates held their tenuous line all morning against heavy Federal pressure.

The Alabamans were reinforced in the afternoon by Martin E. Green’s brigade which extended the line eastward. The Confederates handled their weapons with grim determination and skill, but it was evident their line was slowly giving way. Late in the afternoon, the Federals managed to turn the Confederate flank at the overlook. Unable to stem the blue tide along both the Bruinsburg Road and the Rodney Road, the Confederates retired from the field. 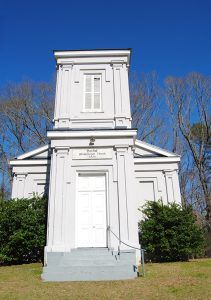 Bethel Presbyterian Church – Bethel Presbyterian Church is one of the few remaining landmarks associated with the battle of Port Gibson. The original congregation of the Bethel Presbyterian Church organized in 1826 under the direction of Dr. Jeremiah Chamberlain. The building that still stands today, was built in the mid-1840s. During Union General Ulysses S. Grant’s campaign to take Vicksburg, he landed his troops east of the Mississippi River just a few miles from here at Bruinsburg. His troops passed Bethel Church on April 30, 1863, moving to Port Gibson on the Rodney Road. After conquering Port Gibson, the troops moved onward to take Raymond and Jackson, before moving westward to Vicksburg.

Although the slave gallery has been removed and the original pointed steeple destroyed by a tornado in 1943, the church retains the classical symmetry of the Greek Revival style. Bethel Church is located one mile north of Canemount Plantation and two and a half miles south of Windsor Ruins on the Windsor Loop off of the Natchez Trace.

Bruinsburg Landing – After arriving at Bruinsburg Landing, the Union soldiers marched inland toward Port Gibson on a sunken stretch of road known as the Rodney Road. Of the old road, a Union soldier wrote, “The moon is shining above us and the road is romantic in the extreme. The artillery wagons rattle forward and the heavy tramp of many men gives a dull but impressive sound.” The Battle of Port Gibson took place along this route near the Shaifer House and Magnolia Church. Mississippi River Commerce virtually ceased during the Civil War, dealing a death blow to the small settlement of Bruinsburg. The economic collapse during and after the war finished it. By 1865, the town was “officially” extinct. In a 1938 tour book, Bruinsburg Landing was described as affording one of the best views of the Bayou Pierre and that there were a few inhabitants living in a primitive logging camp. Today, there is nothing left of the former town, and the site is located on private property. Not too many years ago, highway 552 provided access to the Mississippi River at the mouth of Bayou Pierre, but, that access is also closed today.