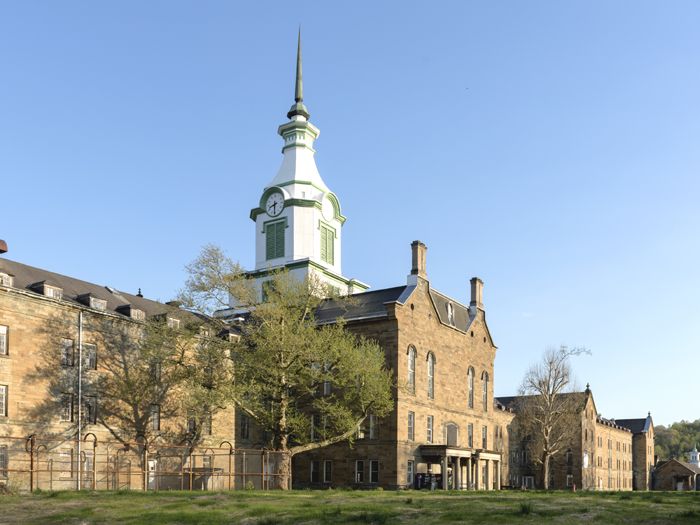 Trans-Allegheny Lunatic Asylum, Weston, West Virginia – Once known as the Weston State Hospital, the Trans-Allegheny Lunatic Asylum in Weston, West Virginia opened its doors to patients in 1864. Once it was a house of horrors with severe overcrowding, inhumane conditions, and rampant violence. Today, it comes as no surprise that is said to be extremely haunted. Unlike those places constructed more for the purposes of security and safety, this establishment was to foster the best-known concepts of curing the patient.

In 1938 the asylum was called home to 1,661 patients. That year a survey reported that the hospital housed epileptics, alcoholics, drug addicts and non-educable mental defectives among its population. At its peak in the 1950s, the hospital’s population reached 2,400 patients, more than ten times the number it had been built to accommodate. The hospital was forcibly closed in 1994 due to changes in treatments of patients and the physical deterioration of the facility. Afterward, the building stood vacant for years.

The tales of hauntings and unearthly spirits lurking within the building and on the grounds started long before it ceased to be a hospital. After a few decades, the reports of hauntings and the sounds of restless souls became commonplace. In fact, some workers were said to have stayed only a few days, quitting after hearing inexplicable noises, such as the squeaky wheels of gurneys rolling along a tiled hallway. Sightings include staff and visitors seeing ghostly figures walking through the hallways at night and glimpsing shadowy figures at all hours. One doctor even reported that a spirit followed her home and continues to trouble her to this day. Others have reported seeing a ball of light moving in a hallway and spying apparitions dressed in white.