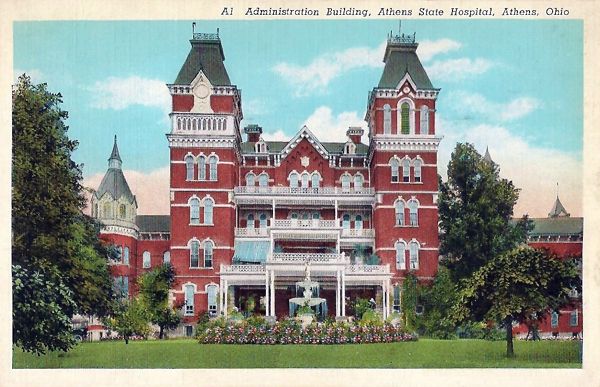 Today, this complex, called the Ridges, is part of Ohio University, but these historic buildings once housed the Athens Lunatic Asylum. Not only are these buildings steeped in history, but some are also said to still “host” visitors from the past.

The historic hospital got its start in 1867 when the Ohio Legislature appointed a commission to find a site for an asylum in southeastern Ohio. A suitable site was found in Athens, and Levi T. Scofield was chosen as the architect. The buildings and grounds’ designs were influenced by Dr. Thomas Story Kirkbride, a 19th-century physician who authored a book on mental hospital design. His designs were often recognizable for their “batwing” floor plans and lavish Victorian architecture.

The original design included an administration building with two wings, one that would house the males and the other for females. The building itself was 853 feet long, 60 feet wide, and built with red bricks fired from clay dug on-site. Built onto the back were a laundry room and boiler house. Seven cottages were also constructed to house even more patients. There was room to house 572 patients in the main building, almost double of what Kirkbride had recommended, leading to overcrowding and conflicts between the patients.

The administrative section, located between the two resident wings, included an entrance hall, offices, a reception room on the first floor, the superintendent’s residence on the second floor, and quarters for other officers and physicians on the 3rd and 4th floors. A large high ceiling amusement hall filled the 2nd and 3rd floors, and a chapel was included on the 4th floor. Behind and beneath the building’s public and private spaces were the heating and mechanical systems, kitchens, cellars, storerooms, and workspaces.

The site, which was first comprised of 141 acres, would eventually grow to 1,019 acres, including cultivated, wooded, and pasture land. The grounds were designed by Herman Haerlin of Cincinnati and would incorporate landscaped hills and trees, decorative lakes, a spring, and a creek with a waterfall. Not only would the patients enjoy the beautiful landscape, but citizens also enjoyed the extensive grounds. Though the facility would never be fully self-sustaining, over the years, the grounds would include livestock, farm fields and gardens, an orchard, greenhouses, a dairy, a receiving hospital, a Tubercular Ward, a physical plant to generate steam heat, and even a carriage shop in the earlier years. 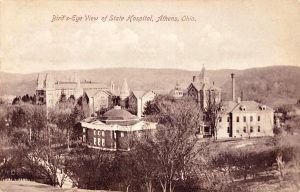 During its operation, the hospital provided services to a variety of patients, including Civil War veterans, children, the elderly, the homeless, rebellious teenagers being taught a lesson by their parents, and violent criminals suffering from various mental and physical disabilities. With diagnoses ranging from the slightest distress to severely mentally ill, these patients were provided various forms of care, many of which have been discredited today. The asylum was best known for its practice of lobotomy, but it was also known to have practiced hydrotherapy, electroshock, restraint, and psychotropic drugs, many of which have been found to be harmful today.

More interesting are the causes listed for admission, including epilepsy, menopause, alcohol addiction, and tuberculosis. General “ill health” also accounted for many admissions, which included in the first three years of operation 39 men and 44 women. For the female patients hospitalized during these first three years of the asylum’s operation, the three leading causes of insanity are recorded as “puerperal condition” (relating to childbirth), “change of life,” and “menstrual derangements.” According to an 1876 report, the leading cause of insanity among male patients was masturbation. The second most common cause of insanity was listed as intemperance (alcohol). Depending upon their condition, a patient’s treatment could range from full care to amazing freedom.

Over the years, numerous buildings were added, including a farm office, a new amusement hall, additional wards and residences, a laundry building, power plant, garages, stables, mechanics shops, a firehouse, therapy rooms, and dozens of others. By the 1950s, the hospital was using 78 buildings and was treating 1,800 patients. 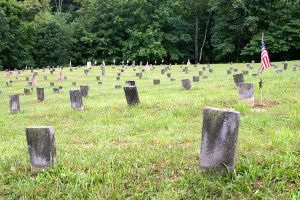 In the 1960s, the total square footage of the facility was recorded at 660,888 square feet. At this time, its population peaked at nearly 2,000 patients, over three times its capacity. However, the number of patients would begin to decline for the next several decades as de-institutionalization accelerated. As the number of people at the Asylum declined, the buildings and wards were abandoned one by one.

Comprised of three graveyards, burials began soon after the institution’s opening as there were deceased patients who were unclaimed by their families. Until 1943 the burials were headed only by stones with numbers, with the names of the dead known only in recorded ledgers. Only one register exists today, which contains the names of 1,700 of the over 2,000 burials. In 1972 the last patients were buried in the asylum cemetery. Today the cemeteries continue to be maintained by the Ohio Department of Mental Health.

In 1977, Athens Asylum made news when it housed multiple personality rapist Billy Milligan. In the highly publicized court case, Milligan was found to have committed several felonies, including armed robbery, kidnapping, and three rapes on the Ohio State University campus. In preparing his defense, psychologists diagnosed Milligan with multiple personality disorder, from which the doctors said he had suffered from early childhood. He was the first person diagnosed with multiple personality disorder to raise such a defense and the first acquitted of a major crime for this reason. Milligan was then sent to a series of state-run mental hospitals, including Athens. While at these hospitals, Milligan reported having ten different personalities. Later 14 more personalities were said to have been discovered. After a decade, Milligan was discharged. He died of cancer at a nursing home in Columbus, Ohio, on December 12, 2014, at 59.

The next year, the hospital made the news again when a patient named Margaret Schilling disappeared on December 1, 1978. It wasn’t until January 12, 1979, 42 days later that, her body was discovered by a maintenance worker in a locked long-abandoned ward once used for patients with infectious illnesses. Though tests showed that she died of heart failure, she was found completely naked with her clothing neatly folded next to her body. More interesting is the permanent stain that her body left behind. Clearly, an imprint of her hair and body can still be seen on the floor, even though numerous attempts have been made to remove it.

By 1981 the hospital housed fewer than 300 patients, numerous buildings stood abandoned, and over 300 acres were transferred to Ohio University. In 1988, the facilities and grounds (excluding the cemeteries) were deeded from the Department of Mental Health to Ohio University.

The Athens Center officially closed in 1993, and the remaining patients transferred to another facility. The property stood vacant for several years before restoration began. The name of the property was changed to the “Ridges” and in 2001 renovation work was completed on the main building, known as Lin Hall. Today it houses music, geology, biotechnology offices, storage facilities, and the Kennedy Museum of Art. Over the years, other hospital buildings were modeled and used by the University, although many others still sit abandoned.

It comes as no surprise that the buildings of this historic asylum are allegedly haunted. One of the most famous ghosts is that of Margaret Shilling, who left her body print upon the hospital floor. Her spirit is said to have appeared staring down from the window of the room where her body was found, has been seen attempting to escape, and has been known to wander various parts of the building at night. And, according to some, she is not alone. Other former patients are also said to remain in residence, with reports from visitors seeing strange figures standing in the empty wings of the former hospital, hearing disembodied voices and squeaking gurneys, seeing strange lights, and hearing screams echoing through the walls. More frightening, there are rumors of spirits of patients who remain shackled in the basement. These many spirits are thought to be those who died or suffered at the hands of staff in the asylum.

The cemetery is also said to be haunted by shadowy people and strange lights. In one area, the graves’ linear shapes form a circle, which is said to be a witches’ meeting point.

Tours of the outside grounds of the old asylum are held on the third Sunday of each month. 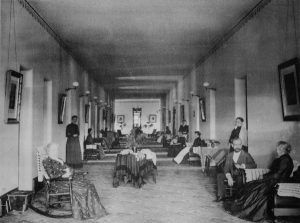