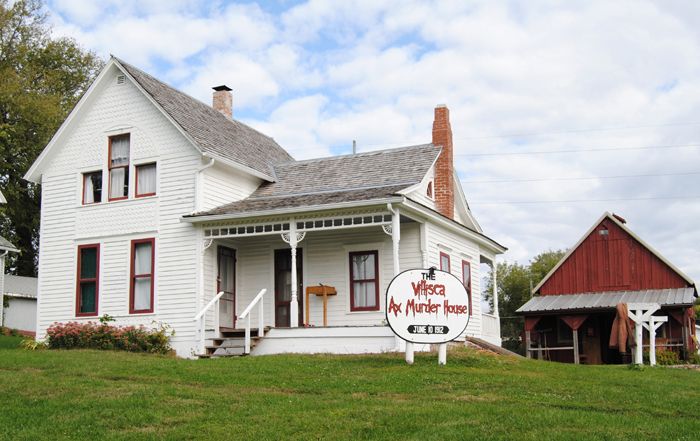 Moore Home-Ax Murder House, Villisca, Iowa – One the morning of June 10, 1912, the small mid-western community of Villisca, Iowa awoke to find eight of their own had been brutally murdered by an ax during the middle of the night. This fateful evening changed the town from a peaceful community where people left their doors unlocked and trusted their neighbors into a community of suspicion, where the townsfolk reinforced their locks and openly carried weapons. Accusations, rumors, and suspicion ran rampant among friends and families. Newspaper reporters, private detectives and law enforcement agencies from neighboring counties all verged upon the town collecting hundreds of interviews and facts. Though there were several suspects, the murders were never solved. The walls of this old home today continue to protect the identity of the vicious murderer who bludgeoned to death the entire family of Josiah Moore and two overnight guests. Open for tours today, the old house is said to be the site of a number of paranormal activities. A number of reports have been given that visitors hear the sounds of children voices and laughter when there is none present, objects seemingly move of their own accord, mysterious banging sounds are heard throughout the house. paranormal investigators are known to have come away with mysterious audio, video and photographic evidence.