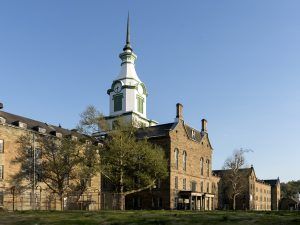 Once known as the Weston State Hospital, the Trans-Allegheny Lunatic Asylum in Weston, West Virginia opened its doors to patients in 1864. Once it was a house of horrors with severe overcrowding, inhumane conditions, and rampant violence. Today, it comes as no surprise that is said to be extremely haunted.

The hospital was authorized by the Virginia General Assembly in the early 1850s as the Trans-Allegheny Lunatic Asylum. Following consultations with Thomas Kirkbride, then-superintendent of the Pennsylvania Hospital for the Insane, a building was designed in the Gothic and Tudor Revival styles. The building followed the Kirkbride plan, which called for long rambling wings arranged in a staggered formation, assuring that each of the connecting structures received an abundance of therapeutic sunlight and fresh air and patients were allowed privacy.

Unlike those places constructed more for the purposes of security and safety, this establishment was to foster the best-known concepts of curing the patient. Following the “Kirkbride Plan,” the asylum was located in a rural area where patients would be housed among strangers only, discouraged from seeing anyone they knew. Patients were not even allowed to receive gifts or mail.

Construction began in late 1858, initially conducted by prison and slave laborers. Skilled stonemasons were later brought in from Europe.

Construction was interrupted by the outbreak of the Civil War in 1861 and the partially built hospital and surrounding grounds became Camp Tyler for the Union. The completed southern wing of the asylum was used as barracks and the main foundation served as a stable. Confederate raids in 1862 and 1863 temporarily dislodged the Union troops. Following the admission of West Virginia as a U.S. state in 1863, the hospital was renamed the West Virginia Hospital for the Insane. In 1864, Confederate raiders stripped the Asylum of all food and clothing intended for its first group of patients. 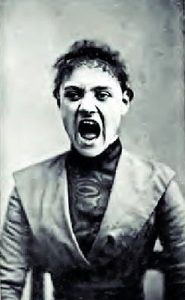 The first patients were admitted in October 1864. The very first patient was a housewife who had “domestic trouble.” The first logbook used at the hospital lists reasons for patient admission and includes causes like grief, congestion of the brain, feebleness of intellect, seduction and novel reading.

Its original construction was planned for 250 people. From the beginning, the hospital was largely self-sufficient. They raised their own vegetables, maintained a dairy herd, and operated an ice plant. A nearby coal mine supplied fuel for heat and there was a reservoir for water. All of the patient’s’ clothing, curtains, and fabrics were made at Weston, as well as fine quality mattresses and most of the institutional furniture, thus fulfilling the 19th-century ideal that institutions be self-sustaining and that mental patients learn a trade.

Lying on more than 600 acres, the land also included a cemetery for the many that passed away at the asylum over the years.

The 200-foot central clock tower was completed in 1871. The center unit is four stories high with a great cupola and the clock tower. This section was originally designed to house offices and personnel and at one time even had such features as a large ballroom.

Separate rooms for black people were completed in 1873. 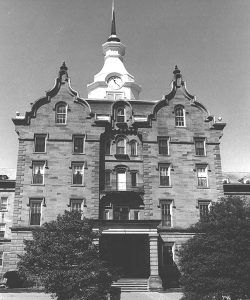 Construction would continue into 1881 when the original plan was complete. The total cost was $725,000 — more than $300,000 over the original budget. At that point, more than 700 patients were housed in the building, which was 1,295 feet long, and contained two-and-a-half miles of hallways. The walls were two-and-a-half feet thick, dense enough to muffle the screams of even the most tormented soul.

Nineteenth-century healing tactics were barbaric, some of which included bloodletting and insulin coma therapy. Seclusion cells and confinement cribs were utilized to control violent patients. Unfortunately, there were innocent victims of the asylum due to misdiagnosed conditions and unfortunate situations. Many spent their entire lifetime at the asylum, only to end up in an unmarked grave on a lonely hillside.

Changes were constantly being made. A Women’s Auxiliary was built in 1890 and two years later the 20-acre front lawn was enclosed by a Victorian wrought iron fence. A gas well was drilled on the grounds in 1902, making the facility even more self-sufficient.

The hospital’s name was again changed to the Weston State Hospital in 1913.

In the early 20th century overcrowding, a developing attitude that treatment should be directed more to maintenance than to the attempt to rehabilitate, and a continual lack of funds plagued the hospital for many years. New buildings were filled as soon as they were completed.

Over the years, several auxiliary buildings have come and gone. A tuberculosis building was established in 1930. A large 3.5 story brick unit was constructed around 1935.

Several fires were set by patients over the years including a large fire in October 1935 which ravaged the fourth floor of the hospital. Remarkably, no one was killed in the blaze, and the wing was rebuilt for $155,000 by the Works Progress Administration.

In 1938 the asylum was called home to 1,661 patients. That year a survey reported that the hospital housed epileptics, alcoholics, drug addicts and non-educable mental defectives among its population.

In 1949, the hospital had some 1,800 residents. That year the Charleston Gazette reported that the facility had poor sanitation and insufficient furniture, lighting, and heating in much of the complex.

At its peak in the 1950s, the hospital’s population reached 2,400 patients, more than ten times the number it had been built to accommodate. In the rear of the main unit are several brick structures that housed service units such as kitchen and dining facilities, laundry, shops, a forensics building, and storage. Many of these were built during this time. This was likely one of the worst times for patients at the hospital with the overcrowded and understaffed conditions. It, no doubt, could make even the most sane of souls lose their minds. Anyone who complained or acted out was subjected to solitary confinement, chained to the walls of an empty room for months on end. 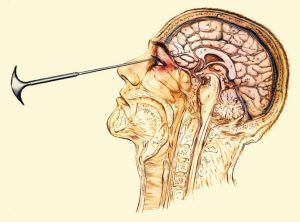 During these many years, a number of medical practices such as ice water baths, seclusion cells, electroshock therapy, and lobotomies were commonly used on patients. At one point, one of the “favored” procedures that were used extensively was the “ice-pick” (transorbital) lobotomy. This crude procedure utilized a one- or two-pronged device which was driven through the orbital socket of the eye and into the brain with a sharp blow. The permanent damage caused was thought to relieve some of the patient’s more severe symptoms. In 1952, one doctor alone performed 228 such lobotomies during a two-week period in West Virginia. They aptly named it “Operation Ice Pick.”

But, the real problem as overcrowding. Inability to handle the large population led to an increase in violence. There were several cases of patients killing other patients. In one instance two patients hanged one of their fellow patients using a set of bed sheets. When he did not die, the pair cut him down and used a metal bed frame to crush his head.

Even the staff were not immune to the violence and several female employees were raped. Many former employees reported being attacked while on duty. One evening a nurse went missing, her rotting body was found two months later at the bottom of an unused staircase.

In order to deal with some of more violent, uncontrollable, and severely mentally ill, it is said that many of them were kept in cages.

In 1960 a Medical Center, which included a morgue, was built. 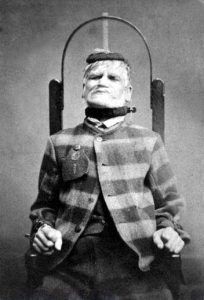 In 1985, the Charleston Gazette once again exposed the asylum, reporting that court-appointed inspectors found the asylum to be “dirty and unkempt,” with many patients left naked and “confined to dirty wards with bathrooms smeared with feces.”

Seven years later, in 1992, even more bad news rocked the asylum when the Charleston Gazette again decried that horrendous conditions inside of the asylum. That same year a patient named George Edward Bodie died after a fight with another patient. Another patient, Brian Scott Bee, committed suicide and his badly decomposing body was not found for eight days.

The hospital was forcibly closed in 1994 due to changes in treatments of patients and the physical deterioration of the facility.

The hospital was auctioned off in August 2007 and Joe Jordon bought the 242,000-square-foot building for $1.5 million. Today, it is open for guided historic and paranormal tours as well as evening ghost hunts.

The central section, directly under the 200 ft high clock tower, contains a museum and several faithfully restored period rooms from the 1870’s to the 1960’s. One of the patient wards has been restored but the remaining 23 are largely untouched. The endless decayed hallways and vacant patient rooms, including isolation cells with rusted rings once used to chain the most violent, create an extremely eerie atmosphere.

Trans-Allegheny Lunatic Asylum has been featured in a number of paranormal television shows. The building was listed on the National Register of Historic Places in 1990. It is the largest hand-cut stone masonry building in North America, and is purportedly the second largest in the world, next to the Kremlin.