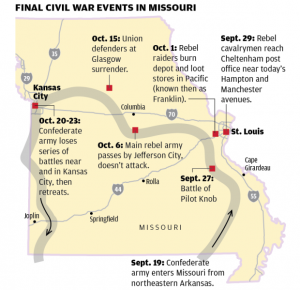 Price’s Missouri Expedition – August-October, 1864 – Also known as Price’s Raid, this expedition through Missouri and Kansas occurred in the Trans-Mississippi Theater of the Civil War in the fall of 1864. It was led by Confederate Major General Sterling Price, who started from Camden, Arkansas, on August 28, 1864. The campaign’s intention was to recapture St. Louis and recover Missouri for the Confederacy. Early in the campaign, the Confederate forces won several early victories, but the tides changed after they were defeated in Westport, Missouri. They then made their way to Kansas where they lost the Battles of Marais des Cygnes and Mine Creek before they were forced to retreat back to Missouri, and ultimately to Arkansas. 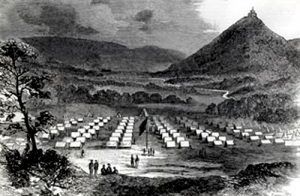 Fort Davidson – September 27, 1864 – The first battle of Price’s Raid, the Battle of Fort Davidson, also called the Battle of Pilot Knob, took place in Iron County, Missouri. In September 1864, a Confederate army under Major General Sterling Price crossed into Missouri from Arkansas with the goal of capturing St. Louis. Union Brigadier General Thomas Ewing moved with reinforcements down the railroad to Ironton to slow Price’s advance. On the morning of September 27, 1864, the Confederates attacked, driving the Federals back into their defenses anchored by Fort Davidson. In the late afternoon, Price unsuccessfully assaulted the fort repeatedly, suffering heavy casualties. Price, considering the possible time involved, had dismissed the possibility of mounting guns on the high ground to compel the fort to surrender or to shell the garrison into submission. During the night, the Federals evacuated the fort. Price had paid a high price in lives and gave Union forces the necessary time to concentrate and oppose his raid. The Union victory resulted in 184 Union casualties and 1,500 Confederate casualties.

Fourth Battle of Boonville – October 11, 1864 – Taking place in Cooper County, Missouri on this was the second battle of Price’s Expedition. General Sterling Price’s Confederate forces arrived in Boonville, Missouri on October 10, 1864. Even though the town was largely sympathetic to the Confederacy, undisciplined members of Price’s force engaged in a two-day frenzy of looting that delayed their advance. In the meantime, Union forces were working on a strategy to defeat the Confederates. Union Brigadier General John B. Sanborn, who had been following Price and his men came upon Price’s rear guard on the outside of Boonville on October 11, but he was repulsed by Confederate Major Generals John S. Marmaduke and James F. Fagan. Sanborn then withdrew south of Saline Creek. On the same day, “Bloody Bill” Anderson and his bushwhackers arrived in Boonville with Union scalps dangling from their horses’ bridles. Appalled, ordered Anderson to remove the scalps immediately and refused to speak to him until he did. Once Anderson complied, Price ordered him to take his men northward to break up the North Missouri Railroad. However, Anderson and other bushwhackers had already brought the railroad line to a halt, so he instead attacked and looted small towns and depots north of the Missouri River. On October 12, Price and his troops left Boonville. 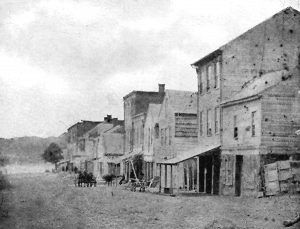 Glasgow – October 15, 1864 – Part of Price’s Missouri Expedition, this battle occurred in Howard County on October 15, 1864. While Major General Sterling Price led his men westward across Missouri, he decided to send a detachment to Glasgow to liberate weapons and supplies in an arms storehouse, purported to be there. This combined mounted infantry, cavalry, and artillery force laid siege to the town and the fortifications on Hereford Hill. Before dawn on October 15, Confederate artillery opened on the town and Rebels advanced on Glasgow by various routes, forcing the Yankees to fall back. The Union forces retreated out of town and up the hill toward the fortifications on Hereford Hill. There they formed a defensive line in this area, but the Confederates continued to advance. Convinced that he could not defend against another Confederate attack, Colonel Chester Harding surrendered around 1:30 pm. Although Harding destroyed some Federal stores, Price’s men found rifle-muskets, overcoats, and horses. The Confederates remained in town for three days before rejoining the main column with new supplies and weapons and marching on towards Kansas City. The victory and capture of supplies and weapons were a boost to Price’s army’s morale. The Confederate victory resulted in 400 Union casualties and 50 Confederate.

Sedalia – October 15, 1864 – While Confederate Brigadier Generals John B. Clark and Joe Shelby were engaged in the Battle of Glasgow, General Price sent Brigadier General M. Jeff Thompson and elements of Shelby’s Iron Brigade, including about 1,500 men, to attack the town of Sedalia, Missouri. The Confederates defeated and captured the Missouri Union militia stationed there in two fortified redoubts, and then some of the Confederates troops began sacking the town. Realizing what was happening Thompson, ordered them to stop, permitting them to keep only the weapons, equipment, and horses he had already seized from the patroled defenders. Thompson and his men then left Sedalita to rejoin Price’s main force. 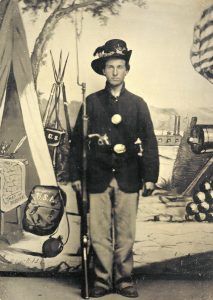 Lexington – 2 – October 19, 1864 – A battle of Price’s Missouri Expedition, this skirmish took place in Lafayette County on October 19, 1864. Major General Sterling Price’s march along the Missouri River was slow, providing the Yankees a chance to concentrate. Major General William S. Rosecrans, commanding the Department of the Missouri, proposed a pincer movement to trap Price and his army, but he was unable to communicate with Major General Samuel R. Curtis, commander of the Department of Kansas, to formalize the plan. Curtis was having problems because many of his troops were Kansas militia and they refused to enter Missouri, but a force of 2,000 men under the command of Major General James G. Blunt did set out for Lexington. On October 19, Price’s army approached Lexington, collided with Union scouts and pickets about 2:00 pm, drove them back, and engaged in a battle with the main force. The Yankees resisted at first, but Price’s army eventually pushed them through the town to the western outskirts and pursued them along the Independence Road until nightfall. Without Curtis’s entire force, the Yankees could not stop Price’s army, but they did further retard their slow march. Blunt gained valuable information about the size and disposition of Price’s army. The Confederate victory resulted in an unknown number of casualties. 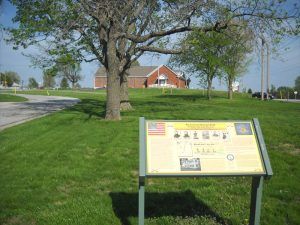 Little Blue River – October 21, 1864 – Also called the Battle of Westport, this battle, taking place in Jackson County on October 21, 1864, was part of Price’s Missouri Expedition. Price’s march along the Missouri River was slow, providing the Yankees a chance to concentrate. Major General William S. Rosecrans, commanding the Department of the Missouri, proposed a pincer movement to trap Price and his army, but he was unable to communicate with Major General Samuel R. Curtis, commander of the Department of Kansas, to formalize the plan. Curtis was having problems because many of his troops were Kansas militia and they refused to enter Missouri, but a force of about 2,000 men under the command of Major General James G. Blunt did set out for Lexington. He met the Confederate troops at Lexington on the 19th, slowed their progress, but was defeated and retreated. On the 20th, Blunt’s troops arrived on the Little Blue River, eight miles east of Independence. The Union forces prepared to engage the Confederates again in a strong defensive position on the west bank. Curtis, however, ordered Blunt into Independence while leaving a small force, under Colonel Thomas Moonlight, on the Little Blue. The next day, Curtis ordered Blunt to take all of the volunteers and return to the Little Blue. As he neared the stream, he discovered that Moonlight’s small force had burned the bridge as ordered, engaged the enemy, and retreated away from the strong defensive position occupied the day before, crossing the river. Blunt entered the fray and attempted to drive the enemy back beyond the defensive position that he wished to reoccupy. The Yankees forced the Confederates to fall back, at first, but their numerical superiority took its toll in the five-hour battle. The Federals retreated to Independence and went into camp there after dark. Once again, the Confederates had been slowed and more Union reinforcements were arriving. The Confederate victory resulted in an unknown number of casualties.