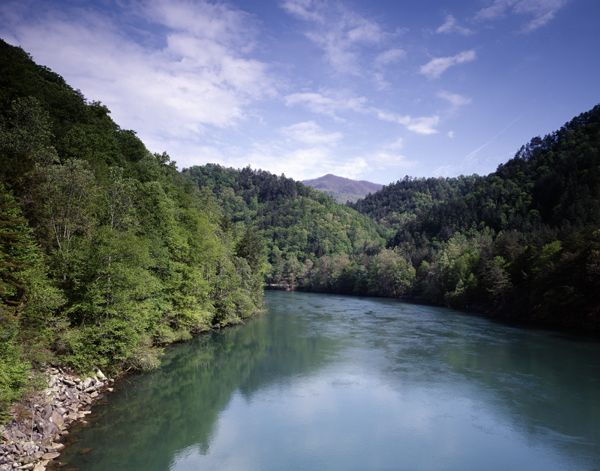 The principal route used by settlers for more than 50 years to reach Kentucky from the East, the Wilderness Road, was blazed by the now-legendary frontiersman Daniel Boone in 1775.

The earliest origins of the Wilderness Road were the traces, or trails, created by the great herds of buffalo that once roamed the region. These trails were later followed by Native American tribes of the area, such as the Cherokee and Shawnee. These first peoples called  the path the Athowominee, translated as the “Path of the Armed Ones” or “The Great Warrior’s Path.”

The first recorded English exploration of the Appalachian Mountains was by explorer and fur trader Abraham Wood, which began around 1650. Later, Wood sent more exploring parties into the mountains, and in 1671, the Batts-Fallam expedition reached the Appalachian divide and found the Indian trail known as the Great Warrior’s Path.

Two years later, in 1673, Wood sent James Needham and his assistant, Gabriel Arthur, to the Cherokee capital in Chota, Tennessee. The purpose was to try to make direct contact with the Cherokee for trade to bypass the Ocaneechee “middlemen” traders. 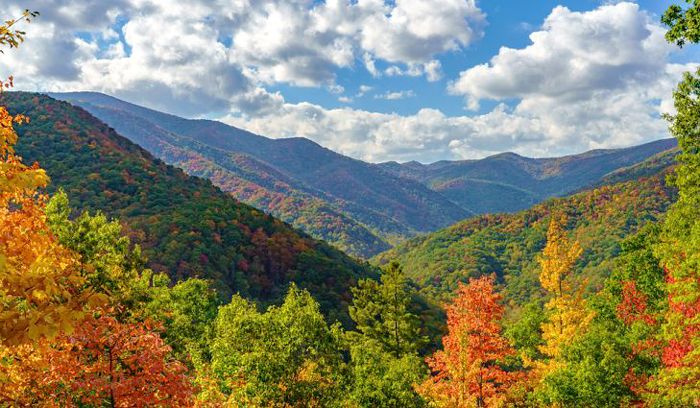 Needham returned to Virginia to procure trade goods, leaving Gabriel Arthur behind to learn the Cherokee language. On the way, Needham got into an argument with his guide, “Indian John,” and was killed by him. In the meantime, Arthur traveled with the Cherokee throughout the Appalachians. He was probably the first European to visit modern West Virginia and cross the Cumberland Gap. The Shawnee later captured Arthur in 1673, but he was released in hopes of promoting trade with the English.

In 1681, Colonel Cadwallader Jones established trade with Indians beyond the Blue Ridge Mountains, even though such contact was discouraged by the Crown of England. Small excursions into eastern Kentucky and trading with the Indians continued for the next several decades, but it wouldn’t be until 1750 that strides were made for increased westward expansion. 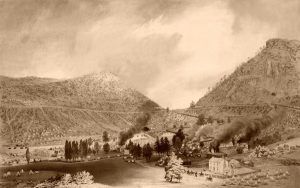 Cumberland Gap by Strobridge and Co.

In 1750, Dr. Thomas Walker, a surveyor, and investor in the Loyal Land Company, led a scouting expedition into the area and discovered the Cumberland Gap, which crossed the mountain barrier into present-day southeastern Kentucky. Walker and five companions set out from Albemarle County, Virginia, intending to explore lands further west for potential settlement. The Loyal Land Co., which sponsored the expedition, sought an 800,000-acre land grant in the region. After discovering the gap, which Walker originally named “Cave Gap,” the group followed the “Warriors’ Path” for about ten miles northwest to the Cumberland River, which he also discovered and named. Near the river, the party built a log cabin, one of the first in Kentucky. After spending two months vainly exploring the hills of eastern Kentucky in search of the storied Bluegrass region of central Kentucky, the party crossed the mountains north of Cumberland Gap and returned home. In the short term, the Loyal Land Company settled people in southwest Virginia but not Kentucky.

Further exploration of the area was sharply curtailed because the wars with the Indians and the French kept the frontier closed. Relative peace came in 1761 with the pacification of the Cherokee following the bloody uprising during which Fort Loudoun was taken and its occupants massacred. That same year, long hunter Elisha Wallen led a group of hunters into Southwest Virginia, and they roamed the area for 18 months. News of Wallen’s adventure spread, and other wandering long hunters soon followed. In 1767 Daniel Boone came from the Yadkin Valley of North Carolina and got as far as the Big Sandy River before turning back. 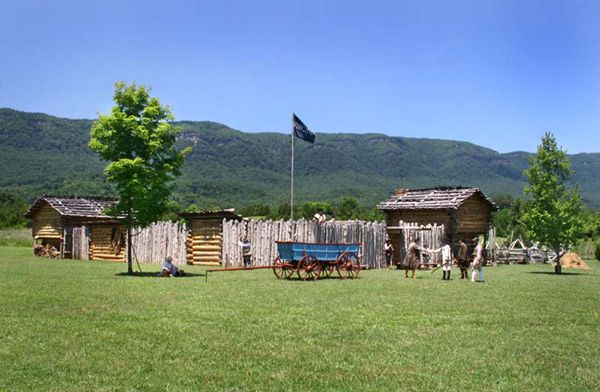 That same year, Daniel Boone, John Finley, with whom he had served in Braddock’s army during the French & Indian War, and four others made their way along the Wilderness Trail to Kentucky. Just before reaching Cumberland Gap, they came upon Joseph Martin and some 20 other men building the settlement and fort called Martin’s Station. Boone moved on and spent two years hunting and trapping in eastern Kentucky. However, Indians soon chased Martin and his men off the land where they had settled. Joseph Martin returned to the area six years later and rebuilt the fort.

In 1773, Daniel Boone sought to lead his family and several others to settle in Kentucky. However, Cherokee Indians attacked the group, and two would-be settlers, including Boone’s son James, were killed.

In 1774, Judge Richard Henderson and other prominent North Carolinians established the Transylvania Company, a land speculation company. The men hoped to purchase land from the Cherokee on the Kentucky side of the Appalachian Mountains and establish a 14th Colony. In February 1775, Henderson arrived at Sycamore Shoals, the ancient treaty grounds of the Cherokee. He then negotiated with the tribesmen, purchasing over 20,000,000 acres of land between the Cumberland and Kentucky Rivers for 10,000 pounds worth of trade goods. The purchase included most of eastern Kentucky and a portion of middle Tennessee. Henderson and the Transylvania Company hired Daniel Boone to blaze a trail through the Cumberland Gap into central Kentucky. 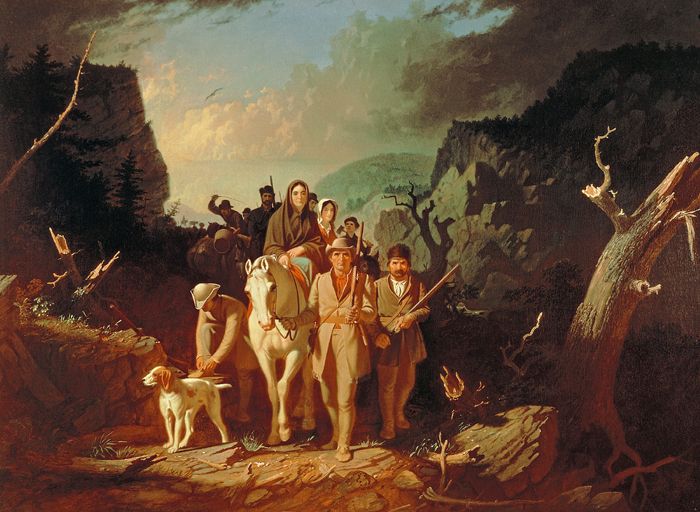 On March 10, 1775, Daniel Boone and about 30 ax-wielding road cutters (including his brother and son-in-law) set off from the present-day Kingsport, Tennessee traveling north along a portion of the Great Warrior’s Path, heading through Moccasin Gap in the Clinch Mountains. About 20 miles from the Cumberland Gap, Boone and his party rested at Martin’s Station before moving on. On March 24, 1775, Boone’s group was only 15 miles from their final destination of the Kentucky River when they camped for the night. Just before daybreak, a group of Shawnee warriors attacked the sleeping men. Most of the men were able to escape, though a few were killed or injured. In April, the group arrived on the south side of the Kentucky River in Madison County, Kentucky.

On March 28, 1775, Judge Richard Henderson followed Boone’s rough trail through the forests and mountains, leaving Kingsport with about 30 horsemen.

At Martin’s Station, some 40-50 additional pioneers joined the group. On their way, they met nearly a hundred refugees fleeing Native American attacks further down the road. Despite the danger, the party continued, and on April 20, 1775, they arrived at what they named Boonesborough in honor of Daniel Boone. 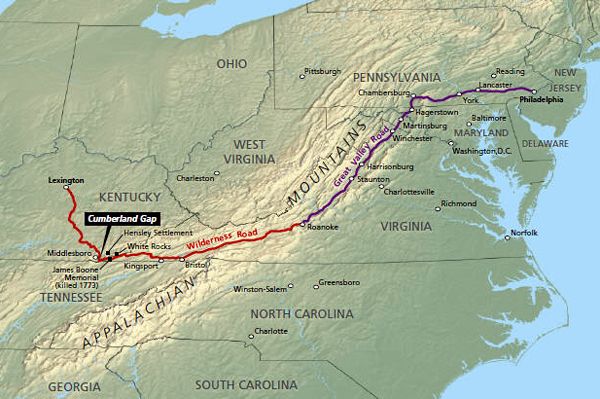 The Wilderness Road, first blazed some 200 miles from Fort Chiswell, Virginia, through the Cumberland Gap into central Kentucky, enabled the founding of the first settlements in the Blue Grass State, including Boonesboro, Harrod’s Town, and Benjamin Logan’s. After the outbreak of the Revolutionary War, the rush toward western settlement began, and it would continue throughout the war and beyond. Sometime after it was initially blazed, the path was lengthened, following Native American trails, to reach the Falls of the Ohio River at Louisville, Kentucky. Initially, the Wilderness Road was steep and rough and could only be traversed on foot or horseback.

The original trail was not only extremely rough but also dangerous, with attacks from Indians and outlaws who often hid within the woods just waiting to pounce on weaker pioneers. Animals, too, could often be threatening, such as wolves, panthers, bears, and snakes. Because of these threats, most people traveling along the trail were well-armed. Over time, defensive log blockhouses, often called “stations,” were built alongside the road with portholes in the walls for firing at attackers. Though the Cherokee had negotiated with white settlers for the use of their land, not all were pleased with the land sale. These warriors and other tribes, such as the Shawnee and the Chickamauga, with whom no agreements had been made, were resentful of the settlers taking their ancestral hunting lands. The French and Indian War had further stirred up their passions against the white man. 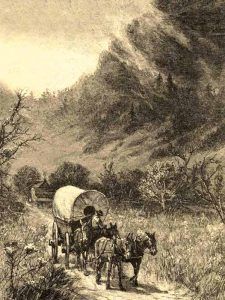 Despite the adverse conditions, thousands of people used the road. After 1770, over 400,000 Scots-Irish immigrants arrived in the colonies to escape their homeland’s poor harvest, high rents, and religious intolerance. These immigrants, as well as Germans and other Europeans, kept coming, and since most of the lands along the Atlantic Coast were already taken, many pressed westward along the Wilderness Road. Enduring several hardships, in the winter of 1778-79, the weather was so cold that the Kentucky River froze to a depth of two feet. Also frozen were many of the settler’s livestock and horses, and the people were forced to eat their frozen carcasses to survive. In the early 1780s, the Chickamauga, under the leadership of Dragging Canoe, ambushed numerous travelers along the road. In the fall of 1784 alone, they killed more than 100 men, women, and children.

From The Long Island of the Holston River in present-day Kingsport, Tennessee, the Wilderness Road went north through the Moccasin Gap of Clinch Mountain, then crossed the Clinch River and made its way over rough terrain, now called the Devils Raceway. The trail then crossed Powell Mountain at Kanes Gap, where it ran southwest through the valley of the Powell River to the Cumberland Gap. Beyond the Cumberland Gap, the road forked, with the southern fork passing over the Cumberland Plateau to Nashville, Tennessee, via the Cumberland River. The northern fork split into two parts, with the eastern spur headed into the Bluegrass region of Kentucky to Boonesborough and the western spur running to the Falls of the Ohio River in present-day Louisville. As settlements grew southward, the road stretched to Knoxville, Tennessee, by 1792.

In 1792, Kentucky was admitted to the Union as the 15th state. That very first year, the new Kentucky legislature provided money to upgrade the road, and four years later, the improved road was opened for wagon and carriage travel. A postal road also opened in 1792 from Bean Station, Tennessee, through Cumberland Gap to Danville, Kentucky. This connection of Kentucky to the East was a great advantage to frontier settlers who considered the postal riders heroes and waited eagerly for the arrival of their mail. 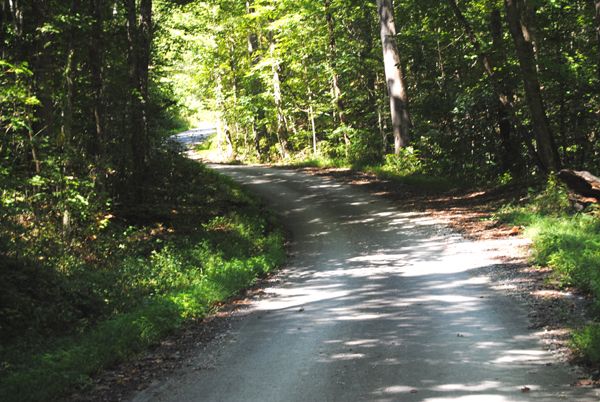 One segment of the Wilderness Road was among the first roads in the United States to be paved. Later, the old trail would be linked to the famous Dixie Highway that connected Detroit, Michigan, to Miami, Florida. This new road brought new industry, tourism, to the rural areas, filling hotels and restaurants with travelers. Today, many modern highways follow much of its route, Cumberland Gap is a National Park, and portions of the Wilderness Road are included in Wilderness Road State Park in Virginia. Martin’s Station has been reconstructed and can be seen about five miles east of Cumberland Gap in Virginia.