John L. Hatcher was a frontiersman, explorer, guide, and army scout who made his way throughout the American West in the 19th Century.

Thought to have been born in Botetourt County, Virginia in about 1812, little is known about his early life. At some point, he joined his sister and her husband at Wapakoneta, Ohio. He then made his way west and was in St. Louis, Missouri in about 1835 where he got involved in the fur trade.

He then headed out on the Santa Fe Trail with the Charles Bent and Ceran St. Vrain party to present-day Colorado, where he worked at Bent’s Fort for several years. There he became a noted hunter, trapper, and trader. During this time he made several trips down the Chihuahua Trail into Mexico to buy and sell horses and mules and ranged as far north as the North Platte River. Making contact with the Kiowa Indians on a trading trip, he was so well-liked, that they reportedly adopted him into the tribe. He soon won a reputation as a dead shot and a fearless diplomat in his dealings with Indians, who gave him the nickname “Freckled Hand.” 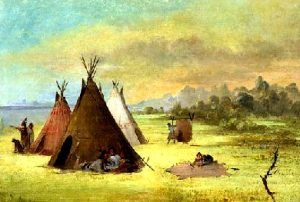 He lived for a time with the Kiowa Indians and when Lieutenant James W. Abert, explored the Texas Panhandle in 1845, he acted as a guide. Abert’s account of the expedition noted Hatcher’s expert marksmanship and ability as an interpreter. After leading Abert to Adobe Walls on the Canadian River, he made his way back to Bent’s Fort.

By the mid-1840s Hatcher was one of the company’s most able and trusted hunters and traders. At this time he had established several cabins on the Arkansas River’s north bank between Bent’s Fort and El Pueblo, Colorado.

During the Mexican-American War, he became an Army scout. As soldiers were sent to occupy points from Texas to California, they were not always welcomed, especially in New Mexico. By July 1846 the situation in Taos was so unsettled that Charles Bent, who had been appointed the New Mexico Territorial Governor, sent for Hatcher to escort his wife, her children, and her sister, Mrs. Kit Carson, back to Bent’s Fort. When the Taos Rebellion began in January 1847, Charles Bent was killed. When his brother William Bent recruited volunteers to avenge Charles’ murder, Hatcher was among the volunteers. Hatcher later participated in the trial and hanging of the “revolutionaries” at Taos.

In late 1848 Colonel John C. Fremont attempted to enlist Hatcher as a guide to cross the Rocky Mountains near the 38th parallel. However, Hatcher as well as several other mountain men refused and warned the officer of the dangers of traveling in the snow-bound mountains. But Fremont, who wanted to prove that a railroad route could be established through the mountains, insisted on making the expedition. Believing that a successful crossing of the mountains in the winter would demonstrate the feasibility of the route, he was successful in getting mountain man “Old” Bill Williams at El Pueblo to act as a guide. Williams allegedly accompanied the expedition to minimize the loss of life, but in the end, 11 men died of cold and starvation. The group finally gave up and returned to Taos, New Mexico, where Fremont blamed Williams for the disaster.

Hatcher continued to work for William Bent until the early 1850s, taking wagon loads of trade goods and supplies up to meet the emigrant wagon trains and gold seekers traveling to Oregon and California.

In 1850 Hatcher acted as a guide for Colonel John Collier’s party in New Mexico, and in 1851 he provided data for Lieutenant John G. Parke, who was compiling a map of the little-known country south of the Arkansas River.

On January 29, 1853, Hatcher left Taos with 15 companions and drove a flock of sheep over the California Trail via Fort Laramie and South Pass, Wyoming to Placerville, California where they arrived in June.

John L. Hatcher is “as familiar and renowned in the vicinity of Santa Fe and Taos as that of Kit Carson, his old friend and companion.” — Placerville Herald

After returning to New Mexico over the Gila Trail from Los Angeles in December, Hatcher spent several years as a trader and freighter on the Santa Fe Trail. In 1858 he is reported to have single-handedly prevented 300 Comanche warriors, led by Chief Old Wolf, from attacking his small caravan near Wagon Mound by holding a knife to the chief’s head until all the young braves had ridden off.

He then returned to California and settled in the Sonoma Valley where he established a ranch in partnership with Angus Boggs. In 1867, sold his interest in the ranch to Boggs for $30,000 and moved to Oregon.

“Hatcher had an inexhaustible fund of anecdote and humor, which kept his camp circle in a continual roar… He was about the cleverest fellow I met; always cheerful, ready to hunt and do his duty; a good temper, with an occasional dash of impatience, quickly relieved, however, by a well-delivered, hearty, though harsh, exclamation; and an unerring shot.” — Lewis Garrard, author and friend

©Kathy Weiser/Legends of America, updated May 2021.