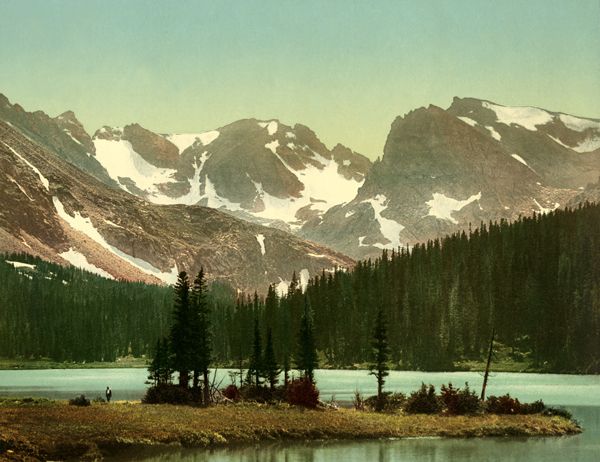 “And it comes forcibly to mind that this passage in the great Rocky Mountains was fashioned by the supreme ruler to aid the progress of the American people in their westward march to the Pacific Ocean.” — Joseph Buffum, 1849 California Emigrant

The Rocky Mountains stretch like a jagged spine between Alaska and Mexico, splitting North America into East and West. The Continental Divide is not a simple line of peaks, easily threaded by track and roads, but a complex of overlapping mountain ranges and treeless sagebrush steppe, hundreds of miles wide. In the days of covered wagon travel, the Rockies were an imposing barrier to the movement of people, commerce, and communications.

Early explorers probed the Northern Rockies, looking for the fabled “Northwest Passage” to open an easy route for transcontinental traffic. The men of Lewis and Clark’s Corps of Discovery finally put that myth to rest in 1805, when they nearly perished crossing Montana’s Bitterroot Range and Lemhi Pass. But, the Absaroka (Crow), Shoshone, and other tribes knew of a much easier gateway through the mountains some 400 miles further south, in today’s Wyoming.

A small band of traders from the Pacific Fur Company discovered their secret in 1812. Robert Stuart and his men left Fort Astoria, Washington, a company post on the Columbia River, in June of that year to carry business dispatches overland to New York. 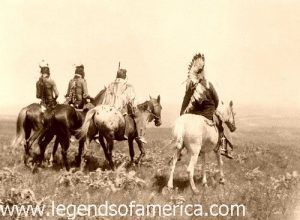 Misfortune nipped their heels from the start: one man attempted suicide, mosquitoes were a constant torment, and a Shoshone guide ran off with Stuart’s horse. But, before disappearing, the guide told the Astorians of a shorter route through the central Rockies, and they decided to look for it on their own. Three months into their journey, fate turned vicious when the traders approached the Teton Range near today’s Idaho-Wyoming border, an Absaroka war party captured all their horses.

Now Stuart’s men were afoot in an unfamiliar country, a thousand miles from any settlement, without supplies and on the sharp edge of a Rocky Mountain winter. The desperate men were picking their way eastward when they struck an Indian trace that led them south of the Wind River Range and through a broad pass over the Great Divide. They had found the Shoshone’s “shorter route” but were still deep in the unfriendly wilderness. After a hungry winter spent huddled on the eastern plains of Wyoming, Stuart’s tough little band finally reached St. Louis, Missouri in April 1813, bringing news of the southern pass that could open the continent to wagon travel.

Their news was drowned out by the commotion of conflict with England — the War of 1812. The great southern pass was forgotten until friendly Absaroka directed a small party of mountain men, including the legendary Jedediah Smith, James Clyman, and Thomas Fitzpatrick, through the gap in 1824. 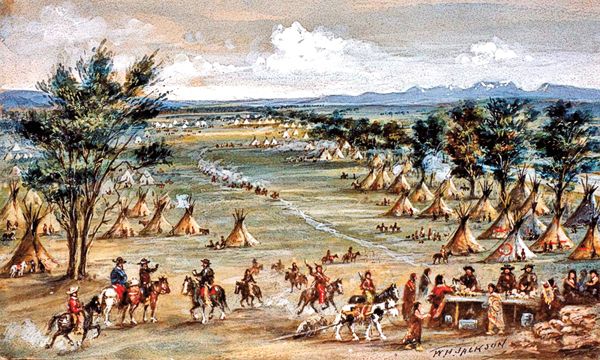 Then, at last, geography was “set into motion.” Trappers and pack-mule caravans began carrying supplies over South Pass to the annual fur trade fair called the Rendezvous. Mountain man, William Sublette, took the first wagons to the Rendezvous in 1830 but stopped just east of the Continental Divide. Although Sublette showed that loaded wagons could make the trip into the mountains, the “fur trace” was so rough that he returned with pack mules the next year. Captain Benjamin L. E. Bonneville, leading a 20-wagon supply train, blazed the first wagon track over South Pass beginning on July 24, 1832, and more carts and wagons followed.

Soon, other travelers began joining up with the annual fur caravans for safe overland passage. Missionaries Marcus and Narcissa Whitman and Henry and Eliza Spalding crossed the Rocky Mountains with the fur brigade in 1836, proving that women were not too delicate for the trials of the trail. Four years later, emigrants Joel and Mary Walker, with four children and two covered wagons, joined the last supply caravan heading to the very last trappers’ Rendezvous. They reached Oregon in September 1840, and in January, Mary gave birth to a daughter. The Walkers showed that even children and mothers “in a family way” could take the 2,000-mile overland trip. Their example helped open the floodgates of emigration.

First a trickle, then a stream, and finally a torrent of humanity, livestock, and technology poured through South Pass over the next three decades. Government survey parties, soldiers, missionaries, emigrant wagon and handcart companies, hopeful gold-seekers and adventurers, countless stage and mail coaches, commercial freight wagons, riders of the Pony Express, and the transcontinental telegraph — all funneled through that 2- mile-wide passage through the Continental Divide. So many hooves and wheels cut into the earth that the ground in places is still scored with ruts.

South Pass was the gateway to the West. Without that accident of geography, there would have been no Oregon Trail, no California Trail, no Mormon Utah, and perhaps, no United States stretching from the Atlantic to the Pacific. 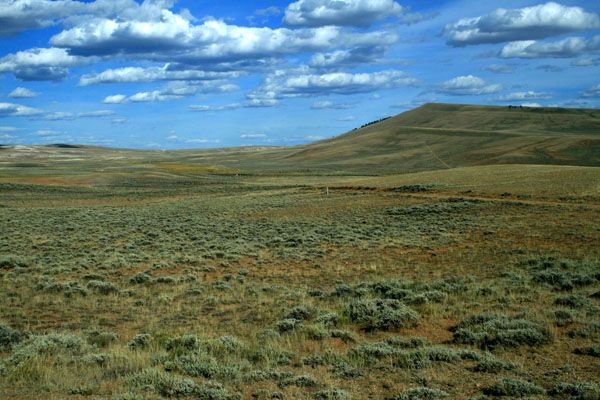 The Oregon Trail – Pathway to the West