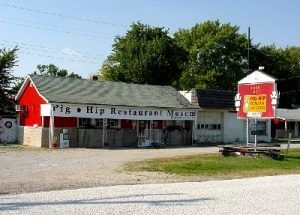 The Pig-Hip Restaurant was a popular stop for Route 66’ers during the road’s heydays. Unfortunately, it burned to the ground in March 2007. All that’s left today is a stone marker. Photo by Kathy Alexander.

When traveling Route 66, some eight miles south of Lincoln, Illinois, you will come to the small town of Broadwell. Established in 1869, the community now supports only about 150 souls. Here in this small farming town, once sat one of the Mother Road’s more famous icons – the old Pig Hip Restaurant.

Ernie Edwards and his wife served thousands of barbeque sandwiches and fries at the Pig-Hip to travelers of the road from 1937 until 1991, when the couple retired. Ernie and Frances first opened a small, three-table cafe they called the Harbor Inn. The next year when a hungry farmer pointed to a steaming pork roast and blurted out that he wanted a sandwich “off that pig hip,” Ernie liked the sound of it and soon changed the cafe’s name to “The Pig-Hip.”

Over the years, the restaurant expanded, Ernie’s brother, Joe, built a filling station next door, and his sister, Bonnie Welch, and her husband added a motel. Suddenly, Broadwell was a full-service stop, and business was booming. 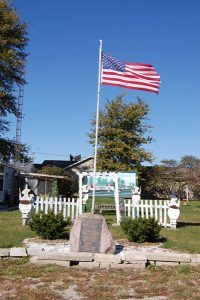 Stone Marker at the site of the former Pig Hip. Photo by Kathy Alexander.

In the 1960s, when the interstate bypassed Broadwell, Route 66 fell into disuse and disrepair. Eventually, the filling station and motel were sold, then closed. By the early 1980s, the handful of other businesses in Broadwell also shut down, leaving The Pig-Hip as the sole commercial business. In 1990, the Edwards’ retired and, unable to find a restaurant buyer, closed the business. The next year, they turned it into a museum, which served travelers until the building was destroyed by fire on March 5, 2007. Today, the site is simply identified with a stone marker. Ernie Edwards died in 2012.

As you travel onward, look for an old two-lane section of the Mother Road on your left about three miles south of Broadwell. Another mile will bring you to Elkhart Hill, a glacial ridge rising above the prairie, and the historic village of Elkhart, Illinois. Though just a small village of about 450 people today, this settlement is rich in history and provides several places to visit.

Long before a settlement of Elkhart was established, the area was called home to the Kickapoo Indians, where Elkhart Hill provided an excellent viewpoint for the natives and as a landmark for westward-bound pioneers.

According to legend, the hill got its name from the Kickapoo Chief’s daughter, White Blossom. As the tale goes, the princess was wooed by two warriors, one from her own tribe and another from the Shawnee tribe. On one of their annual hunting trips, the two warriors insisted that White Blossom declare which one would become her husband.

When an elk passed by, White Blossom said she would choose the one who could pierce the heart of the large animal. The warrior from the Kickapoo tribe hit the elk’s heart and won the princess’s hand. When they married, the elk heart became their family badge. Since that time, the hill and later settlement retained the name Elkhart. 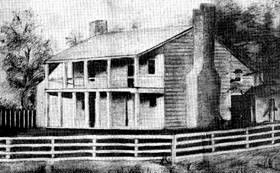 The James Latham home was later turned into the Kentucky Tavern House.

In 1819, James Latham, his son Richard, and a friend named Ebenezer Briggs arrived in the area and built a cabin on the northwest slope of Elkhart Hill. Other settlers soon followed, clearing forested land for farms. These pioneers, from Kentucky and Tennessee, avoided the prairie land, believing it was not fertile enough for farming and their plows could not cut through the tough prairie sod.

In 1824, James Lathem was appointed to the position of Indian Agent at Fort Clark. Just two years later, Latham died and was buried on the hill at what is now known as Latham-Thompson or Elkhart Cemetery, not far from where his cabin once stood.

Later, between 1835 and 1840, the Latham family later converted their log home into the Kentucky House Tavern. Today, while the building has long since disappeared, the location has become the site of several archaeological digs that have produced significant samples of domestic artifacts of the area.

In 1838, a man named John Dean Gillette moved into the area, amassing large amounts of land and raising livestock. Gillette was noted for importing Durham cattle from Scotland and developing the Shorthorn cattle breed, soon shipping over 2,000 head of cattle and 1,000 head of hogs to Europe annually. The London Gazette dubbed him “The Cattle King of the World.” With his friend, Abraham Lincoln, Gillett laid out the town of Lincoln, Illinois, in 1853. Both men courted Lemira Parke, who later became Gillett’s wife. 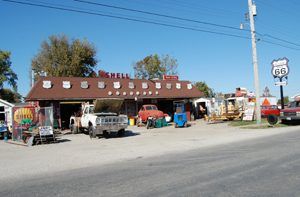 The town of Elkhart was founded in 1855 by John Shockey, one of many that sprouted up along the Alton and Sangamon Railroad. In 1870, the Gillettes built their home on Elkhart Hill, but just one year later, it was destroyed by fire. Two years later, the house was rebuilt, and the Gillettes raised eight children on this land. By the late 1800s, the town of Elkhart became one of the largest shipping points on the Chicago and Alton Railroad, largely due to the success of Gillette’s livestock operation. Becoming prominent figures in central Illinois, the Gillettes made frequent European trips.

Richard J. Oglesby, a three-term governor of Illinois and a close friend of Abraham Lincoln, married the Gillett’s oldest daughter, Emma, and built their home across the hill from the Gillett house. Known as Oglehurst, the 46-room mansion had a pipe organ in the Great Hall, a fourth-floor school room where the children were tutored, and a music room. Years later, the Oglesby mansion burned down.

Over the years, the large estate continued to receive improvements from the Gillette decedents, including barns, orchards, gardens, a church, and major expansions and improvements to the original farmhouse.

Today, the 700-acre estate is in the hands of the seventh generation of John Dean Gillette. While the family still lives in the big house, a three-bedroom guesthouse and a chapel are available for private bookings. Tours can also be arranged individually, where visitors can enjoy undisturbed Indian burial mounds, hillside pastures, walking trails, and perennial gardens while enjoying the spectacular views from the hilltop. The John Dean Gillett Memorial Chapel, built by Mrs. Gillett in memory of her husband, is the only privately owned, self-supporting church in the state.

At the base of Elkhart Hill, the “Under the Prairie Museum” features one of the Midwest’s largest collections of the frontier period and archaeological artifacts. Here, the Kentucky House Tavern sat from the mid-1820s through the mid-1850s. Originally the log home of the Latham family, the building was converted into the Kentucky House Tavern between 1835 and 1840. Though the building is long gone, archaeological digs have uncovered two pit cellars, an earthen-walled cistern, and a well, where several domestic artifacts have been found. These artifacts and other items dating as far back as the 1700s can be viewed at the “Under the Prairie Museum” located at 109 Oglesby Street. 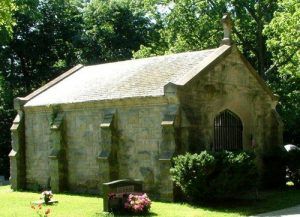 In Elkhart is the historic cemetery, which is said to be haunted by the ghost of Emma Gillette Oglesby. To reach the cemetery, follow County Road 10 which winds through Elkhart heading east. The interesting cemetery is to the right, just before the road passes under an old bridge. This beautiful place is the last resting place of Captain Adam Borgardus, expert marksman and performer in Buffalo Bill’s Wild West Show, John Dean Gillette, the cattle baron in the area, and Governor Richard Oglesby, among many of the pioneers of Logan County. This cemetery is a beautiful wooded site with many distinctive tombstones, a rustic stone chapel, and the Gillette Memorial Bridge over the Elkhart-Mt. Pulaski Road.

The Oglesby crypt has been the long-standing subject of ghost stories. It is said that on certain nights, his wife still visits the tomb. However, as she kneels before the vault, she is interrupted by a group of spectral Indians who chase her off across the bridge leading over the road by the cemetery. Several photographs have captured weird phenomena as mist and apparitions appear in pictures, not seen by the eye. A swirling vortex was photographed over one grave. At the back of the cemetery, a fence separates the graveyard from the woods. Here, people have reported seeing dark-colored apparitions and hearing the sounds of voices and footsteps.

Williamsville – A Small Slice of 66

Just another seven miles down old Route 66, you will come to Williamsville. Established as another of the many villages along the railroad, the town was originally platted in 1853 by Abraham V. Flagg and called Benton. In the fall of that year, Jacob Flagg built the first house for his father, Abraham, and in 1854, the first store was opened by Peter Earnest. When the residents petitioned for a post office, they found that there was already an established town called Benton. The village was renamed Williamsville in honor of Colonel John Williams, a local landowner. By the end of 1855, Williamsville had a post office, several stores, a doctor, and a one-room schoolhouse.

Today, this primarily agricultural town, with about 1,500 residents, features several historic buildings along its vintage slice of Route 66. The Williamsville Depot, a former railroad depot between the Norfolk and Western Railroad track and old Route 66, serves as a senior center and community gathering place. Next door, the Williamsville Historical Museum, constructed from two railroad boxcars, displays many historical town artifacts.

A block north on Elm Street, you can still sit back and relax while you drink an ice-cold 25-cent soda pop at the Die Cast Auto Sales. Here, in this converted 1930’s service station, you can see a very large collection of hard-to-find die-cast models, Coca-Cola collectibles, and Route 66 souvenirs.

Old Station, a converted 1930s service station, is surrounded by old cars and memorabilia. The inside is a blast from the past, with walls filled with a huge inventory of die-cast cars, Coca-Cola collectibles, and Route 66 memorabilia.

And, speaking of vintage cars, another must-stop in Williamsville is the Route 66 Dream Car Museum. Owners Phil and Pat Hawley have assembled an incredible collection of some of the most admired automobiles in history in this Route 66-themed museum.

Another five miles down the road on your journey, you will arrive in the small town of Sherman, where a long-abandoned stretch of early 66 forms the eastern border of Carpenter Park. Now listed on the National Register of Historic Places, the curbed concrete provides a peek into Mother Road’s vintage past.