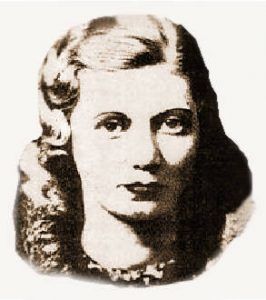 Edna “Rabbits” Murray was a depression-era outlaw and partner of Volney Davis during the early 1930s. She was popularly known to the press as the “Kissing Bandit” for her habit of kissing male robbery victims. However, she was better known, in the underworld as “Rabbits” for her skill as an escape artist. Murray and her boyfriend, Davis, robbed a series of banks before her arrest. She escaped in early May 1927 and returned to her boyfriend for more crimes. She was next arrested in a Chicago, Illinois raid and sentenced to 25 years in prison at Jefferson City, Missouri. However, in November 1931, she and a couple of other inmates escaped by climbing over a fence. they were quickly apprehended and returned to the prison. But Murray was determined and on December 13, 1932, she escaped again. She soon rejoined Davis, and the pair continued their crime spree before settling down in Aurora, Illinois.

On April 23, 1934, outlaws John Dillinger, Homer Van Meter, and John “Red” Hamilton arrived at the couple’s home seeking a hideout after being nearly captured by the FBI near Rhinelander, Wisconsin. John Hamilton, who had been badly wounded during the shootout with the FBI, died of his injuries several days after arriving at their Aurora home. But with the FBI hot on her tail, she was recaptured an on January 22, 1935, she was indicted along with several members of the Barker-Karpis Gang for a conspiracy to kidnap wealthy Minnesota banker Edward Bremer in January 1934. She fled and was soon in Wichita, Kansas with Jess Doyle, a member of the Barker-Karpis Gang, and her sister’s boyfriend. She was apprehended there on February 7, 1935. She was convicted with several others in the kidnapping conspiracy and sentenced to federal prison on May 6, 1935. Paroled from the Women’s Prison at Jefferson City, Missouri on December 20, 1940, she eventually made her way to California. She died in San Francisco in 1966.